Star fruit is a delicious tropical fruit, and as such it’s in high demand whenever it’s in season. It usually has 5 ridges which, when cut into slices across its width, form an attractive star shape.

So what do you do with the skin on those beautiful stars ? Are they like citrus fruits, peel them off and eat the flesh ? Or do you eat the star fruit skin like the rest of the fruit ?

This is what we’ll be talking about today, and touch on a few other star fruit FAQs. 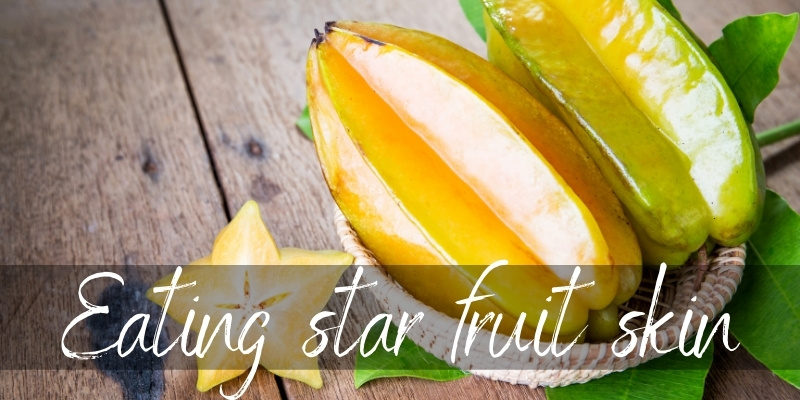 Can You Eat Star Fruit Skin?

Star fruit is a delicious tropical fruit, and yes you can eat the skin. Due to its waxy texture star fruit skin is a little thicker than apple skins, but it’s still easy enough to eat.

Star fruit not an official member of the citrus fruit variety, but its sweet flesh has a distinctive bitter undertone which leads many people to believe that it may be a member of the same group.

Also known as “carambola,” the star fruit is native to Southeast Asia and has been cultivated in the area for hundreds of years. The fruit was introduced to the Americas in the late 1800s, but it was widely regarded as decorative and not grown commercially in the US on any significant scale until more recently.

Read also: When Is Star Fruit In Season ? Here’s What You Should Know

The skin of the star fruit is quite waxy in texture and tends to be a little rougher around the edge of the ridges. There is no over-riding flavor contained within the skin so you won’t spoil the taste by eating the fruit whole.

It’s fine to peel the skin off if you would prefer, but why throw away additional nutrients and goodness if you don’t have to?

As star fruit begins to ripen, it transitions from green to yellow and quite often the tips of the ridges turn slightly brown—but don’t let that put you off.

To tell if the fruit is perfectly ripe, you will want to leave it to stand at room temperature and it should produce a rich scent that resembles the aroma of the flesh.

If you’ve never eaten one before, then it will be hard to know what that scent is and you will have to rely on the color as the best indicator.

Even so, make sure to always turn the star fruit every 12 hours, as this is a sensitive fruit. Ripe star fruit may crush under its own weight if left in one position for too long.

Can you ripen star fruit after it’s been cut?

Once the skin has been cut on a star fruit, it will naturally start to deteriorate. The skin acts as a protective layer and prevents the flesh from breaking down as it comes into contact with the air.

It’s best to keep them in a refrigerator until you know you want to use them and then take them out two or three days prior to that. 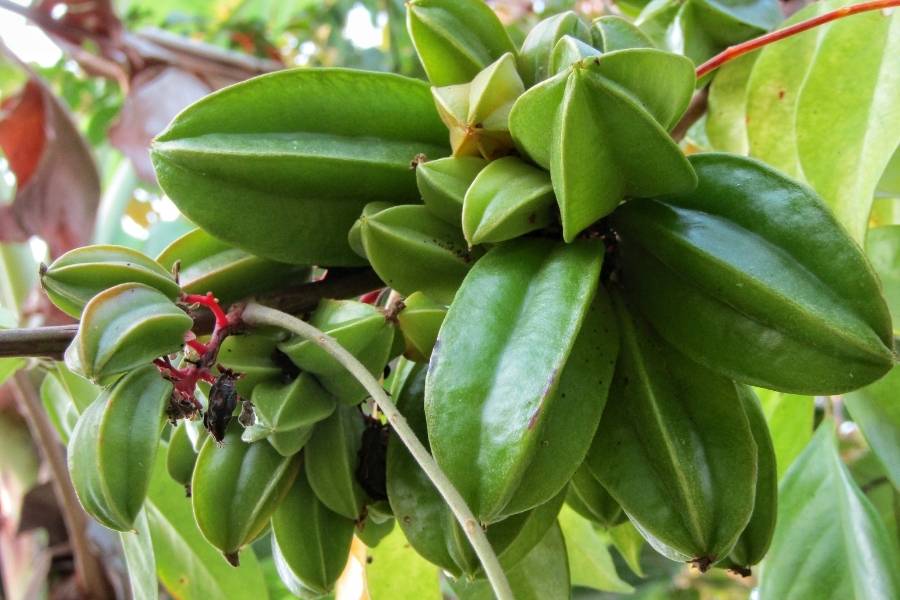 Can you eat star fruit seeds?

The whole of the carambola fruit can be consumed so there is no need to peel or de-seed before eating.

However, if you like to grow your own fruit and veg, then it’s perfectly possible to remove the seeds, dry them out, and try your hand at planting your own star fruit tree.

Bear in mind that as a tropical fruit variety, you will find it hard to grow carambola outside of hardiness zones 10 through 12 in the US.

How do you eat star fruit?

Star fruit can be eaten in much the same way as other fruits: you can simply have them on their own or in dishes as part of a recipe.

The texture is described as being somewhat similar to that of a pear or soft apple, so your decision as to whether or not you want to eat them on their own may well be swayed by this.

They naturally lend themselves to fruit salads or blended together as part of a smoothie and can also be used in cakes and other baked goods. A thin slice of star fruit can also be found as a garnish on top of ice cream, cheesecake, and pie.

Tropical cocktails can benefit from the decorative appeal of the fruit as its shape makes an interesting focal point on a glass and also gives it an exotic feel.

Asian cuisine will sometimes incorporate the slightly sour taste of the carambola into curries and other stew recipes to create a contrast to the sweet flavors of a dish.

In any case, it’s best to first taste star fruit on its own, to see if you like the flavor. Make sure you let it ripen fully, and then eat it. 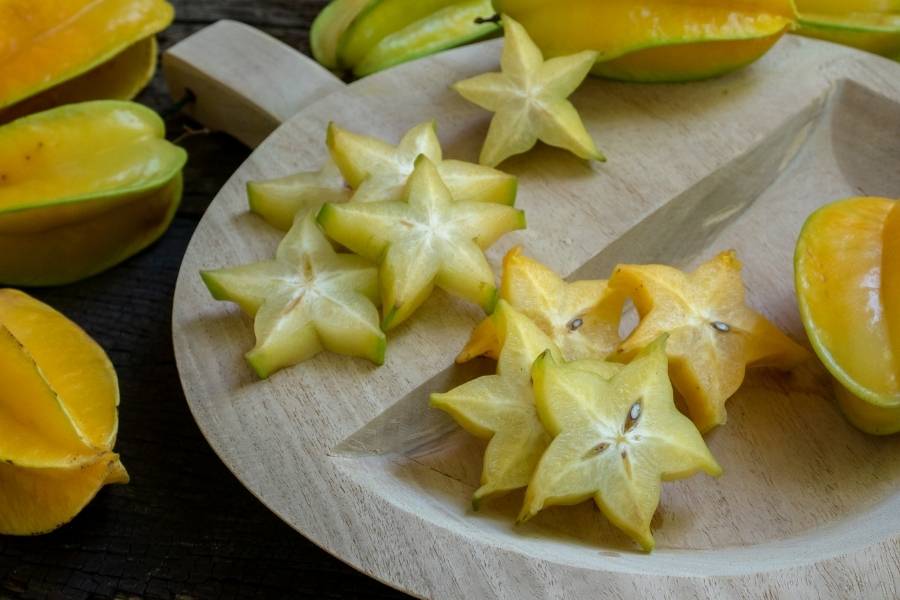 How do you store star fruit?

If you are ready to eat the fruit soon, then leave them out at room temperature and consume when ripe. It is possible to prolong the shelf life of the fruit by placing them in plastic bags or containers and keep them chilled in the refrigerator.

As with lots of other fruit, you can freeze carambola and it will last for up to a year before becoming damaged. Make sure that you wash the fruit properly, slice into stars, lay them out on parchment paper, and freeze them for around three hours.

When they are frozen, you can remove the slices and store them together in separate portions.

Frozen fruit can be used directly in smoothies, or if you prefer you can run the container under cold water to thaw. Only defrost the amount you need as you won’t be able to refreeze it again afterward.

The consistency of fruit can change during the freezing process, so may not feel exactly the same as when it’s fresh. It will also brown very quickly, so sprinkle some lemon juice into it right as it thaws.

Can you dry star fruit?

You can purchase dried star fruit in pre-prepared packs or you can make them yourself at home. The process is fairly simple:

And that’s it! A simple and convenient way to prepare a healthy snack that will keep for weeks in a sealed container.

Read Also:Why Are Limes So Expensive?

Is star fruit safe to eat?

It may seem like a strange question, but it has been previously publicized that the fruit contains a toxic substance that can cause health problems.

The neurotoxins contained in the fruit are easily dealt with by someone whose kidneys are functioning correctly and don’t pose any risk. Humans have been eating this fruit for a long time and it’s perfectly safe for most people.

However, if you do have any type of issues with kidney function, then it is advisable not to eat star fruit.

We often steer clear of exotic and unknown fruits as we are unsure if they are safe to eat, and if they are, it’s not always obvious how to eat them. We hope that our guide to star fruit has made you want to head out and try something new today!