With every passing decade, it is becoming easier and easier to obtain fruit that is out of season. However, while you may be able to purchase strawberries or mangos when they are out of season, that doesn’t mean they taste good!

Furthermore, rare fruits are much more difficult to find when they are out of season. If you have been looking for star fruit at your local grocery store, but you have been unable to find it, you are probably wondering when star fruit is in season. 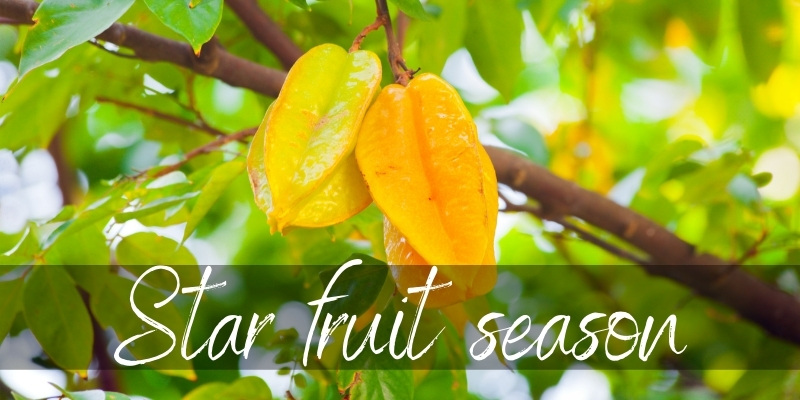 When Is Star Fruit In Season?

Star fruit has an unusual harvest season compared to many other fruits. Star fruit is usually harvested between the months of June and February.

This means that you will usually find it in your grocery store in the autumn, most commonly between October and December.

Of course, the exact time when star fruit is in season changes from year to year. If you’re still curious about the growing process behind star fruit, as well as when to know it is good to eat, read this article to find out!

What Time of Year Is Star Fruit In Season?

A fruit is considered in season when it is specifically grown for that time of year. For example, it is possible to purchase strawberries in the winter, but that does not mean they are in season.

Fruits that are out of season will not be as flavorful. A strawberry in the winter will be nothing like the juicy, ripe fruit you can buy in the summer.

Many popular fruits are available in the summer, but some fruits, such as figs, pomegranates, and, of course, star fruits, are only available during the autumn.

In the case of star fruit, this is because the trees bloom in the summer, and the fruit cannot be harvested until autumn. By the time the fruit has been packaged and sent to your local grocery store, it will likely be late autumn to early winter.

Where Is Star Fruit Grown?

The trees that produce star fruit are known as carambola trees. The exact origins of this tree are unknown, but it is believed they first grew in the islands of Indonesia. This delicious fruit quickly grew in popularity, and now it is a favorite all around the world.

Star fruit is most common in Southeast Asia, and it is grown most commonly in China, the Philippines, and India. Carambola can also be found in South America and Central America.

Carambola trees have little tolerance to frost, so they can only be grown in warm climates. As a result, not many carambola trees are grown in America, which is why star fruit can be so difficult to obtain.

However, the state of Florida provides the perfect growing conditions for star fruit. The warm weather, high humidity, and frequent precipitation all make it quite easy to grow carambola.

In the United States, carambola trees are most commonly found in Florida, but they are also grown in other tropical and subtropical regions, including Hawaii, Texas, Virginia, South Carolina, and Louisiana.

How Is Star Fruit Grown?

Star fruit can be grown in tropical to subtropical regions, and it is possible to grow in the southeastern or southwestern United States. While the plant is quite finicky of its growing conditions (it is intolerant of frost, salt, or soil with a high pH), it will thrive when all of its requirements are met. In fact, in certain areas, carambola trees grow so quickly that they can become invasive species.

If you want to grow your own carambola tree, you will be pleased to discover that the tree usually bears fruit within the first year of planting. During the first two or three years alone, you can generally expect a yield of 10 to 40 pounds of fruit!

If you are lucky enough to live in an area that a carambola tree can thrive in, you’ll never have to worry about running out of this delicious fruit again!

Is Star Fruit Hard to Find In Grocery Stores?

Unfortunately, this exotic fruit can be difficult to locate in many common grocery stores. Asian markets are more likely to carry star fruit, and with a bit of hunting, you shouldn’t have too much difficulty finding this fruit while it is in season. 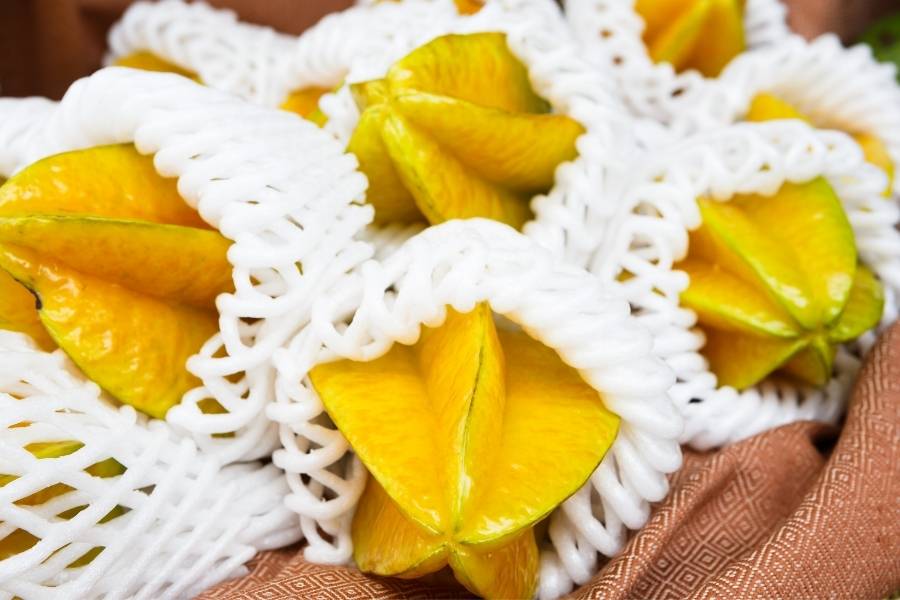 When Is Star Fruit Ripe?

Just like any other fruit, you should pay close attention to a star fruit to make sure it is ripe before you eat it. This fruit has a waxy texture that ranges from green to yellow. The more green a star fruit is, the less ripe it is.

A ripe star fruit will be bright yellow and feel firm to your touch. Of course, it is okay if the fruit has a bit of green color to it.

Fruits that are later in the ripening process might have edges that are slightly browned, but this isn’t a bad thing.

How to Store Star Fruit

You can leave star fruit out on your table or counter for several days, but be sure to turn it frequently so that it doesn’t ripen or brown unevenly.

If you would like your star fruit to keep longer, you can seal it in a plastic bag, unwashed, in the refrigerator. Star fruit will usually keep for about a week in the fridge.

If you would like your star fruit to keep even longer, slice it vertically into star-shaped pieces. Lay out all of the pieces on a tray and freeze them. Then, place all of the pieces in a sealed container to keep until you are ready to use them.

If you slice a starfruit open, you should either freeze it or eat it quickly, as the fruit oxidizes quickly and will become soggy and browned.

Star fruit is a delicious and exotic fruit that is in season during autumn and early winter. While it can be tricky to find this fruit at some grocery stores, with a bit of hunting, you should have little trouble locating it.