Cocoa butter is found in every bar of chocolate on earth, but does is have caffeine ?

All chocolate has at least some measure of caffeine in it, so doesn’t cocoa butter have some too ?

The truth is that cocoa butter has no caffeine, despite a chocolate bar having caffeine.

Today we’re going to talk about exactly that, and explain why that is. So let’s go ! 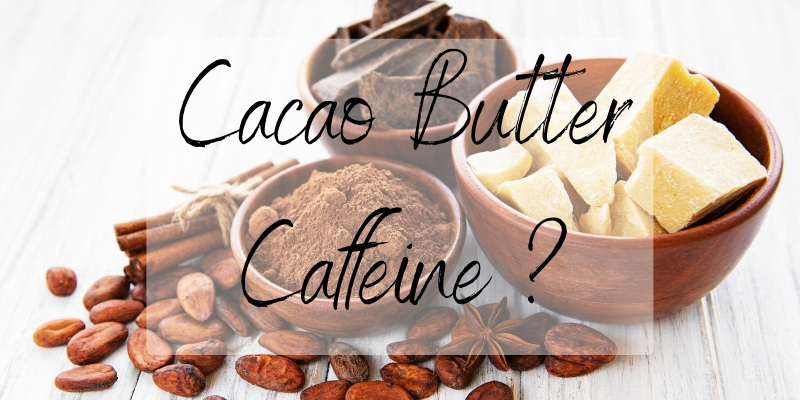 Cocoa butter has no caffeine

Cocoa butter has no caffeine because it’s the cocoa powder that has caffeine.

This is why a bar of chocolate will say it has x amount of caffeine in it, and it will vary from chocolate to chocolate.

It’s not as strong as actual coffee but it’s still enough for those who are ultra-sensitive to it.

How cocoa butter is made

The reason cocoa powder has caffeine, but cocoa butter does not is because caffeine is, after all, a solid. As tiny and powdery as it might be, it’s deeply ingrained into the cocoa powder.

Let’s take a look at how cocoa nibs are processed, so we can understand this better.

This one is the result of cocoa powder being heated, which makes it into a liquid actually. That cocoa liqueur is then pressed until the solids (powder) separate from the fats (butter).

The end result is a very dry-looking plate of cocoa powder, and very little cocoa butter still being present in it. So little actually that it’s counted as not being present.

But if you’ve ever gotten cocoa powder on your hands and tried to rub it off you’ve noticed it’s a little bit sticky. That’s the leftover cocoa butter.

Back to cocoa butter, you’ll notice it has a pale cream/off-white sort of color and smells a whole lot like chocolate. The darker the cocoa butter the better (to a point). It makes up a little over half the cocoa bean’s weight and it’s really tough when cold.

So that’s how you get two separate items from a cocoa bean.

And when you’d like to form a bar of chocolate you will need to continuously mix and press the cocoa butter with the powder, thus tempering it. If it weren’t tempered it’d just crumble apart and wouldn’t ever be shiny. 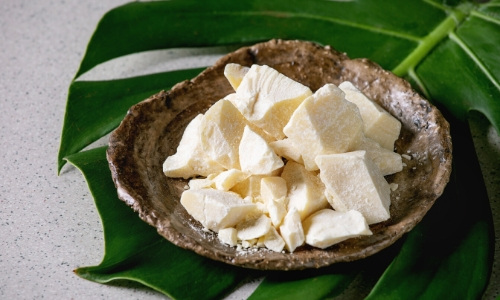 Check if your cocoa butter is mixed

Most of the time cocoa butter is pure. It’s such a sought-after item that folks are willing to pay extra to get the organic, natural versions and some companies may also produce cocoa butter-based products.

But in those cases you need to look at what you’re buying. Some items have caffeine or theobromine or theanine – all three are natural stimulants, and they will affect the body like caffeine.

A cocoa butter that’s been mixed with matcha powder is going to have some theanine, and if you’re planning to mix this into a food – like an energy bar maybe – then it will give you a caffeine-like boost.

Another example would be cocoa butter with ground coffee, used as a sort of body scrub. There is caffeine there, from the ground coffee, but unless you’re going to eat the mixture the caffeine won’t really affect you since it’s very hard to absorb it through the skin.

Whether you’re using pure cocoa butter or getting a product that’s mixed with cocoa butter there’s a couple tips you should know.

1. White chocolate has no caffeine

White chocolate has cocoa butter, but no actual cocoa powder. This stumped us for years – why is it chocolate if it has no cocoa powder ?

Apparently containing just one of the cocoa ingredients is enough.

But this also means white chocolate has no caffeine, which is great if you’re someone who either needs or wants to cut down on their caffeine intake.

It also makes it safer for young children and very old folks, if either of them has a caffeine sensitivity.

As long as it’s a bar of pure, white chocolate and it has no chocolate filling or anything else that may contain caffeine, it’s safe.

2. Cocoa butter is a great base for nut butter

If you’re looking to amp up your nut butter game then switching from coconut butter to cocoa butter may get you there.

For example a hazelnut spread made of blended hazelnuts, cocoa butter and a bit of brown sugar may get you in Nutella territory, with fewer calories and just a couple of ingredients.

Keep in mind that cocoa butter is harder than coconut butter, so you may want to add less of it what you normally would.

It does melt, only it needs a few minutes at human body temp to really start melting.

The upside to this is that you can make your nut butter really thick and creamy, with more emphasis on the nuts you use.

3. Use cocoa butter as a hair mask

Another great way to use cocoa butter is to help your hair become soft and shiny. It’s more of a pre-wash than a leave-in hair mask, but it’s great for moisturizing hair.

Seeing as cocoa butter is very solid, you’ll need to warm it up a little before you apply it, and rub it all over your hair. Warm, never rub hot oil or fat on your hair or body.

A little goes a long way, and if you like you can even use this in conjunction with a bit of argan oil to make it more manageable.

Leave it in for however long you like before you shower, just make sure to wear a warm towel on your head while you do this. The cocoa butter will still get melty on contact with your skin, so keep the towel on.

When washing it out, be gentle and let it all melt in the water. A bit of it might become moisturizer for your skin as well.

Whichever way you decide to use cocoa butter, the caffeine level is nonexistent so no worries. The way it’s made it won’t affect your total caffeine intake, and it’s actually delicious !

One last tip, when baking. Instead of lining a cake tin with baking paper, line it with cocoa butter, and a light dusting of flour on top. This will create a non-stick layer and infuse the cake with a wonderful cocoa hint ! Great for banana bread !