Cocoa butter is amazing on its own and it’s really the soul behind any bit of chocolate. You may be a fan of cocoa butter even if you don’t care for chocolate, since it’s also used in some skincare products and other nut butters.

A very common question is if cocoa butter is actually vegan. The name may be a little misleading, and for folks who are vegan or simply need to avoid dairy in general this is an important point.

So, today we’re going to talk about whether or not cocoa butter is truly vegan, and we’ll cover the topic from two standpoints. First we’ll talk about ingredients, since that’s the first and biggest concern for most folks.

Then we’ll talk about the other part of vegan products – the impact of the industry on the environment, how ethically sourced cocoa butter is, and so on. 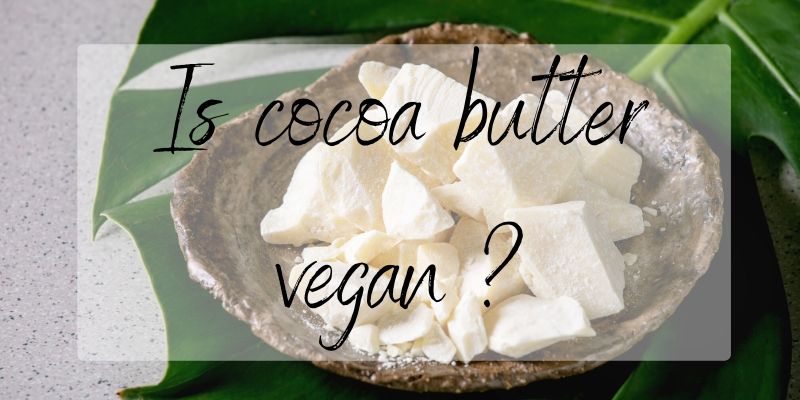 Table Of Content show
1 Is cocoa butter vegan ?
1.1 The ‘butter’ in the name may be misleading
1.2 Vegan chocolate is usually dark chocolate
2 How cocoa butter is made
2.1 Cocoa beans are as vegan as it gets
2.2 Keep an eye out for mixed cocoa butter
3 Cocoa industry and its impact on the environment
3.1 UTZ and other fairtrade programs

Judging by ingredients only, yes cocoa butter is vegan. There is no dairy at all in cocoa butter, since this is just the fats that cocoa beans naturally contain.

This means that cocoa butter is extracted from roasted, ground, and pressed cocoa beans, nothing else added.

Cocoa butter is a little over half of the total weight of a cocoa bean, so there’s quite a lot of it in each and every bean.

The ‘butter’ in the name may be misleading

Cocoa butter is dairy-free, despite having the word ‘butter’ in its name.

The word ‘butter’ is only as relevant as it is in any nut butter – simply a way to indicate that the product has a high fat content, like dairy butter.

And that like dairy butter it solidifies at cold temperatures, and melts at human body temperature – approx. 35 C/95 F.

Cocoa butter is a little special in this case. Where other nut butters like coconut butter or shea butter may be more malleable at room temperature, cocoa butter is solid. As solid as a bar of dark chocolate, and it will break into shards instead of crumble nicely.

Speaking of chocolate, if you’re a dark chocolate fan you may be pleased to find out that it’s the most vegan chocolate out there. 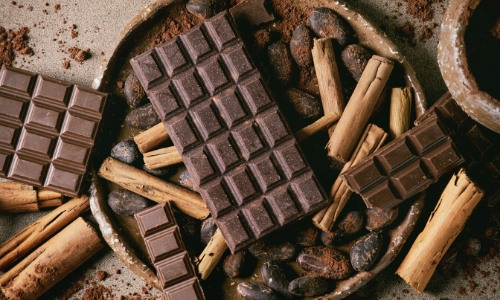 By this we mean that dark chocolate – especially the high percentage ones like 85 % or higher – has no milk or dairy added and is simply a combination of cocoa powder and cocoa butter, with a bit of sugar.

Keep in mind that depending on the company, the chocolate bar may be manufactured in a place that also has dairy products – like milk chocolate for example.

So trace amounts of dairy may be present even in dark chocolate, and that is always stated on the label, at the end of the ingredient list. Something like ‘may contain traces of peanuts or dairy‘, or possibly ‘this product has been made on a line that also makes dairy products’.

There are, of course, companies that make chocolate that uses no dairy at all. Those will state on the label that they’re dairy-free and may also have a vegan certificate on the packaging.

In order to really understand how cocoa butter is vegan we need to take a look at how it’s made, since it’s probably the most important part.

How cocoa butter is made

Cocoa butter is fairly easy to extract, but it does take a while. It’s one of the reasons it’s on the expensive side.

Let’s start with the cocoa pods. Once they’re fully grown they’re picked and opened, exposing the cocoa beans inside. 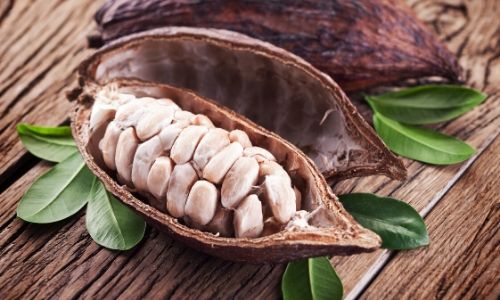 The beans are left to ferment in vats for several days, during which their cocoa/chocolate flavor is developed. They don’t look particularly great, not do they taste great when raw.

After the beans have fermented, they’re dried and roasted. This again will take several days and the entire process can take several weeks (two at its fastest pace).

Once roasted, the beans are ground fairly small, warmed, and put into a hydraulic press. Due to the warmth the ground cocoa beans become a sort of thick liquer.

This liquer is pressed until all the cocoa butter has been removed, and only cocoa mass is left. That cocoa mass is then ground into a fine powder, and that’s how you get cocoa powder !

Cocoa beans are as vegan as it gets

Back to the cocoa beans themselves. Since cocoa butter is made exclusively out of cocoa beans, there’s no reason for it to not be vegan.

There is no dairy in cocoa beans, yet there are fats.

If you think fats in beans or seeds are odd, remember coconut butter, or the fact that coffee has its own natural oils (especially Robusta), or peanuts and peanut oil for that matter.

Keep an eye out for mixed cocoa butter

There are products that contain a mixture of cocoa butter and other ingredients. Those cannot be legally named ‘cocoa butter’ but they may be labeled as ‘cocoa butter based’. This may confuse those who are new to cocoa butter, so be careful and read the label. 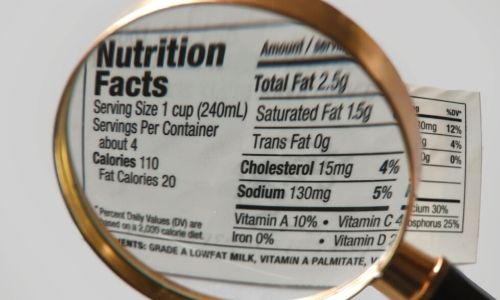 In most cases the cocoa butter is mixed with other nut butters, with shea butter or mango butter being very common additives. These are usually used in skincare products though.

You may also find cocoa butter mixed with a little coconut butter in sweets, especially organic or vegan versions.

Most of the time though cocoa butter isn’t mixed with anything animal related like dairy or honey, unless we’re talking about chocolate or specialty spreads.

Cocoa industry and its impact on the environment

Another important point in deciding whether cocoa butter is vegan is the impact the cocoa industry has on the environment.

Cocoa has been a part of our lives for a very long time, with the Mayans being the most prevalent users.

Over time cocoa production became very big and, like coffee, turned from a luxury item into a common item. This meant larger production and more and more farms.

This meant that cocoa farms extended over large swaths of land, mostly in South America, West Africa, and parts of Southeast Asia. For a very long time South America was the leading region in cocoa production, with Brasil and Ecuador in the lead.

Currently the world’s largest cocoa exporters are found in West Africa, with the Ivory Coast producing about 38% of the total world production, and Ghana 17 % (as of 2017).

There was an entire scandal about child slavery in the cocoa industry, which was addressed near the end of the 20th century.

Cocoa farms are the primary source of income for many families in West Africa and South America, so over time many regulations were implemented both to protect them and the environment.

Read Also:Here’s How To Store Cocoa Butter To Make It Last Longer

UTZ and other fairtrade programs

There are several certificates you can look for on your cocoa butter, or general cocoa products. Most commonly you’ll find them on chocolate and chocolate-related items.

Their aim is to ensure the cocoa farmers involved are treated fairly and paid well, as well as extra care for the environment. Examples like using less pesticides and artificial fertilizers, better waste management, and overall land protection.

UTZ are not the only ones doing this, they’re simply the most prominent in their field.

Other labels to look for are the ISO certificate, released by the International Standardization Organization. The one for cocoa farms and the cocoa industry aims to protect cocoa farmers while also giving them a plan to develop their farms within 10 years.

The goal of those 10 years is to turn cocoa farms into sustainable cocoa farms, to attention to how the farm affects the land and how the workers are treated.

Other labels are Fairtrade and Rainforest Alliance, along with the organic label (the green leaf with stars).

The whole reason such certification programs exist is because great cocoa demand led to a sudden increase in cocoa farms, and most of those were only aimed towards profit.

This meant many factors were disregarded in favor of a high crop yield. Factors like cocoa tree age, excessive use of fertilizers and pesticides, poor waste management from farms, unethical treatment towards workers, poor working environments and a general lack of care towards how beneficial the farm was in the long term.

This all changed when consumers started demanding more and more human rights for the workers involved and also noticing how much cocoa farms impacted the land (both plants and animals).

In a way it’s very similar to ethically sourced coffee, since coffee and cocoa grow in the same regions and are in equally high demand.

So in short, is cocoa vegan from an environmental standpoint ? There’s definitely room for improvement but there’s also more and more farms that are adhering to the certification programs listed above.

Progress is being made and large cocoa and chocolate producers are taking action towards selling only ethically sourced cocoa or cocoa-based products.