Cocoa butter and cocoa powder are part of our everyday lives, whether we notice them or not.

Either in sweets or skincare products, both items are around us and we thoroughly enjoy their delicious aroma.

But how much do we really know about cocoa butter and cocoa powder ? exactly how are they different, and is there a difference between cocoa and cacao ?

This is what we’re going to cover today, because understanding the cocoa bean will help us really understand the many items that contain cocoa in some shape or form.

So let’s start with the two most common byproducts of the cocoa bean: cocoa powder and cocoa butter, and really explore them. 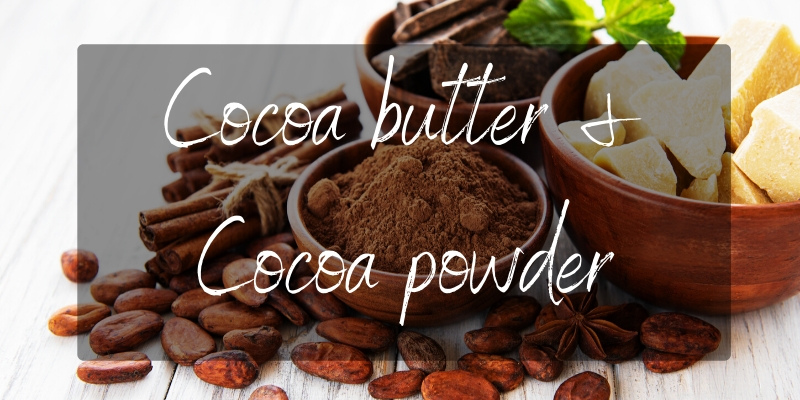 What is the difference between cocoa butter and cocoa powder?

What is cocoa butter ?

Cocoa butter is the fat naturally found in cocoa beans. It’s extracted from roasted and ground cocoa beans, and it makes up a little over half the bean’s total weight.

A little bit of cocoa butter remains in the cocoa powder, but it’s a very small amount. Still, if you ever get cocoa powder on your hands you know it won’t brush off as easily as flour would.

Cocoa butter is usually off-white or light cream colored, especially the less processed versions. It smells and tastes like you would expect from a bar of dark chocolate, except it’s not sweet at all.

This butter is probably the hardest butter around. At room temp it’s as tough as a bar of dark chocolate, breaking and splintering rather than crumbling. 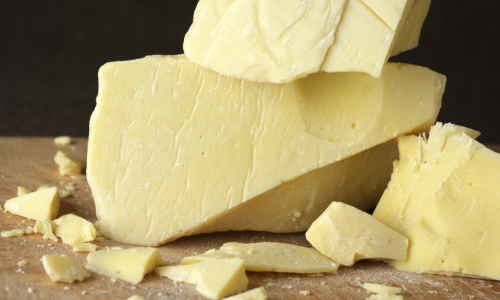 Cocoa butter can easily be introduced in nut butters instead of coconut butter, though you may need to use less since it will harden the butter maybe too much.

Finding cocoa butter isn’t the easiest feat – cocoa powder is more common. This is because when making chocolate the butter is added and blended back into the cocoa powder in a very specific process that results in the shiny, hard look of chocolate bars.

Fun fact: white chocolate has no actual cocoa powder but has a lot of cocoa butter, leading to its great taste.

What is cocoa powder ?

Cocoa powder is a different product although it comes from the same cocoa bean as the butter.

The powdery mass is what remains when the butter is extracted , and you’ll notice there are two main versions of cocoa butter: the darker, slightly reddish version and the paler (almost purple) version.

The darker version is the Dutch processed cocoa, and we’ll cover that a little farther along in this article. For now know that Dutch cocoa is smoother in taste, blends into liquids easier and generally produces a darker, richer chocolate.

Broma cocoa – the lighter one – is the ‘natural’ version of cocoa, and despite looking paler offer the stronger cocoa flavor. It’s not the most common cocoa powder because the process takes a bit longer and the end result is not as visually appealing as the darker, Dutch version. 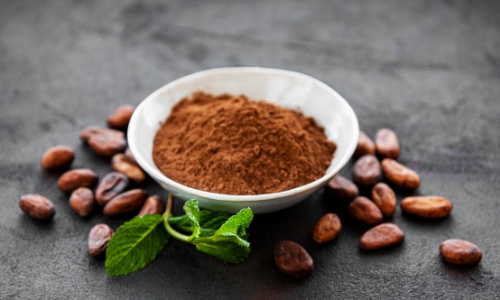 Whichever kind of cocoa powder you get, both will have some amount of caffeine in them. This is because cocoa beans are distant relatives of the coffee bean, and have small amounts of caffeine.

Not enough to wake you up in the morning, it’s even less than a cup of tea. But it’s still noticeable for folks who are very sensitive to caffeine or are allergic to it.

And no, cocoa powder does not dissolve or disappear into a liquid, like sugar or salt. Cocoa powder has a good amount of fiber is it since it’s basically the ground up inside of the cocoa bean.

The same goes for cinnamon and ground coffee actually, since both have a lot of non-soluble fiber in them.

You should know that there are two ways of processing cocoa beans. One is the Dutch, which we’ve mentioned earlier produces the darker cocoa powder, and the ‘natural’ Broma version.

We’ve written natural like that because it’s only a little bit more natural than the Dutch version. So let’s take a look

First, both versions start off from freshly picked cocoa beans. They don’t taste even remotely like chocolate on the inside and are actually a very pale cream color.

They need to be fermented for several days in order to develop the chocolate flavor, and roasted to darken.

So, freshly picked cocoa pods are opened and the beans are left to ferment in containers for several days. 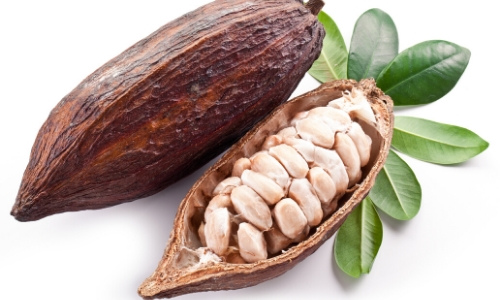 Once properly fermented they are left out to dry completely. This may take several days, meaning it can take as much as two weeks for a cocoa bean to be available for sale since it was harvested.

The beans may be roasted at the farm, or the chocolate companies may roast them once delivered. But all cocoa beans are roasted.

This develops the chocolate flavor even further, and helps separate the butter from the solids.

This is where the two processing methods come in, and here they are.

Dutch processing is the most common, and its result is the dark, slightly reddish cocoa powder we know today.

The cocoa beans are ground and warmed, and this transforms them into a chocolate liquer due to the high fat content.

A hydraulic press squeezes the liquid, with the cocoa butter coming out one end and the cocoa powder staying withing the press.

The remaining powder is then washed with an alkalizing agent to reduce its pH. This means the cocoa powder will not be acidic, meaning it can be used in recipes that require baking powder (not soda) as a leavener.

The overall flavor of the Dutch processed cocoa beans is deeper, slightly bitter and very rich. The alkalizing treatment is why the cocoa appears so dark and reddish.

By comparison the Broma method is simpler, and can be done two ways.

Either follow the Dutch process but stop after the press has removed all the butter, or hang whole roasted cocoa beans in a very warm room (above body temperature) to let the butter melt and drip into trays.

The end result is effectively the same – no alkalizing treatment.

This kind of cocoa powder is considered to be more natural,or simply raw. Its acidity level is higher than Dutch, so mind what you use when baking as it might just change the outcome of a cake.

Read Also:Here’s How To Store Cocoa Butter To Make It Last Longer

Byproducts of cocoa beans are the cacao powder, cacao butter, and cacao nibs. 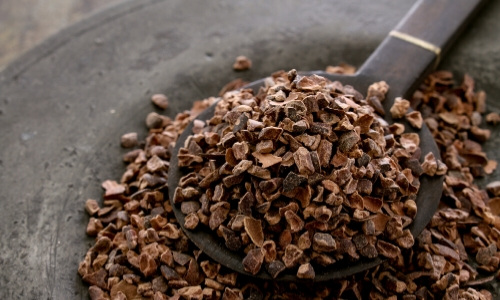 The nibs are the cocoa solids that are then ground into cocoa powder. You may find them for sale in grocery stores more easily than cocoa butter.

You can grind them at home with a good burr grinder, just be careful since they will produce a very fine dust like regular cocoa powder.

They are bitter, so keep that in min if you use them whole in baking recipes.

Can you get cocoa butter from cocoa powder ?

You can’t get cocoa butter from cocoa powder, despite a small amount of it still being present in the powder.

The reason is that it would take simply too much pressure for the butter to actually leave the powder.

If the hydraulic press used in the cocoa farm didn’t manage to get more than a certain amount of butter out, you won’t do a better job at home.

And, if by some twist of fate you had the most amazing hydraulic press known to man and could (in theory) squeeze harder than the one at the farm, you’d need pounds and pounds of cocoa powder to a couple ounces of butter.

Really not worth the time and effort.

Does cocoa powder have caffeine ?

Yes, cocoa powder does contain some caffeine. It’s about 230 mg of caffeine per 100 grams of cocoa powder.

For reference an espresso shot (1 oz/33 ml) is somewhere around 60-70 mg caffeine. Most folks take a double shot and drink more than one coffee a day.

Keep in mind that a bar of chocolate does not use 100 grams of cocoa powder. Most of it is cocoa butter (no caffeine), milk, sugar, and then cocoa powder.

This significantly lowers the caffeine content, but if you’ve got a caffeine sensitivity or are allergic to it you may want to avoid cocoa powder. 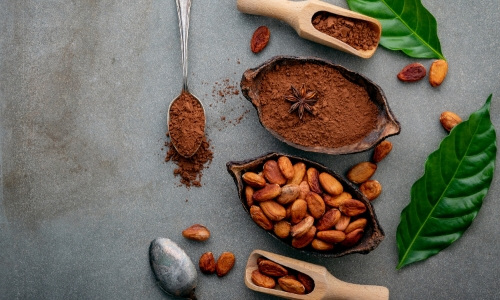 Let’s talk a little bit about cacao and cocoa. You’ve seen it written both ways on different items and they don’t really seem to have a logic.

Well, they actually kind of do, but only to a point. Here’s what we mean.

The whole thing starts from the Spanish word ‘cacao’ (meaning cocoa, who would’ve guessed ?). This is what the original word was – remember the Aztecs and their history with chocolate.

Cacao is mainly used for the raw (or Broma) powder, the ones that haven’t been alkalinized.

So far so good, but things get a little messy. Some companies consider this distinction to be merely semantics, and don’t discriminate between the two word versions.

This way, depending on what company you get your cocoa from, it may say cacao or cocoa. But almost all raw/natural/organic versions will say ‘cacao’.

Hopefully this entire article helped you better understand cocoa beans, powder and butter and gave you a competent explanation if what Dutch and natural cocoa are.