Want that beautiful, sizzling bacon with eggs in the morning ? Then you may be wondering if you should use oil with the bacon, as well as the eggs.

Worry not, today we’re going to talk about whether there’s any point to using oil with bacon, and how to get the best results. 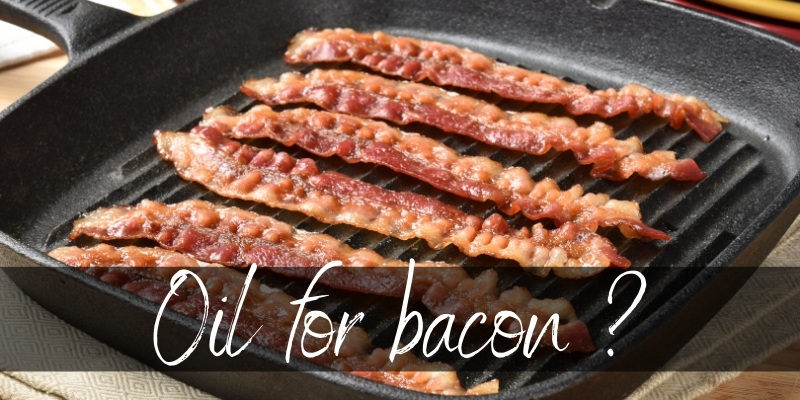 Table Of Content show
1 Do you need oil to cook bacon ?
1.1 The case of lean bacon
2 How to cook bacon without oil
2.1 Caution while cooking bacon
3 What to do with rendered oil?

Do you need oil to cook bacon ?

Bacon cooks very well in its own fat, so adding more oil does not help. Do not add oil to cook bacon. As bacon contains its own fat (the white streaks), it will melt into the hot pan and fry the bacon.

You can then use the melted fat to fry eggs and get a great bacon flavor if you want.

A lot of people like to eat their bacon baked. Even for baking, you should not use any additional oil. But in both frying and baking, you should choose the pot carefully because by the end of the cooking, a lot of liquid fat is expected in your cooking pot.

If you have taken a shallow pan or pot, the oil might spill over, if you use a lot of bacon and it renders a lot of fat.

The case of lean bacon

However, there can be some types of bacon identified as lean bacon that seem to have less fat in their meat. But other types of bacon such as British bacon or American bacon (Streaky bacon) have plenty of fat, more than you need to cook the meat, and there is no need for you to put extra oil to cook them. 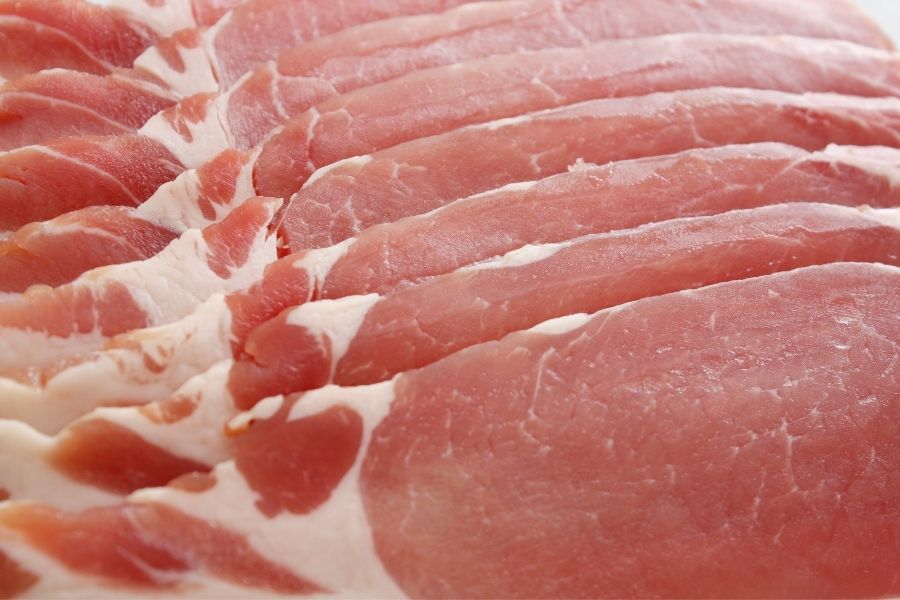 But we can’t imagine a piece of bacon without fat. No matter how little there is, the fat would still be enough to cook the bacon without requiring oil from your kitchen.

Don’t worry though. If you feel like your bacon needs a little extra oil, feel free to use a few drops. The point is that the bacon should not stick, so make sure to not use too much.

Bacon with less fat, bacon with fat removed, cuts from closer to the bone, and center cut are all real things. You may or may not find enough fat to cook them without additional oil.

In such cases, using some oil is no sin. But instead of olive oil, use neutral flavor oil in favor of the unique flavor of the bacon fat.

How to cook bacon without oil

You should remember to take a few steps in the beginning of the cooking to make sure everything goes smoothly. First of all you should use a cold frying pan. A non-stick fry pan is also okay.

Now take the piece of bacon and gently rub it in the inside of the skillet or pan, whichever you are using. This will leave a small layer of fat on the surface of the pan and when you start cooking bacon, this layer of fat will melt and provide the initial grease so that the meat does not stick to the pan’s surface.

Now before you put the pan on the heat, put the bacon in it. Now put your pan on the fire. As the pan heats up, the bacon also gets heated up. After a few minutes, the fat in the bacon starts to melt and provides the grease required for cooking.

It’s best to cook bacon on medium, to get the fat rendered out, and then cook it on a lower heat to make sure it gets very well cooked through,

Depending on the thickness of the bacon, cooking it may take anywhere from 2 minutes to 10. It also depends on how cooked you want it. If you like it extra crispy and it’s a thick cut, it will take the whole 10 minutes.

If you like your bacon softer and only slightly crisped at the edges, you can get that in 2 minutes with a thin strip.

Just be a little mindful. It does not take long to fry bacon, and it’s usually a messy process. Why? As there is a lot of oil rendered by the meat during its cooking, sometimes, your pan has more oil than it can safely handle. 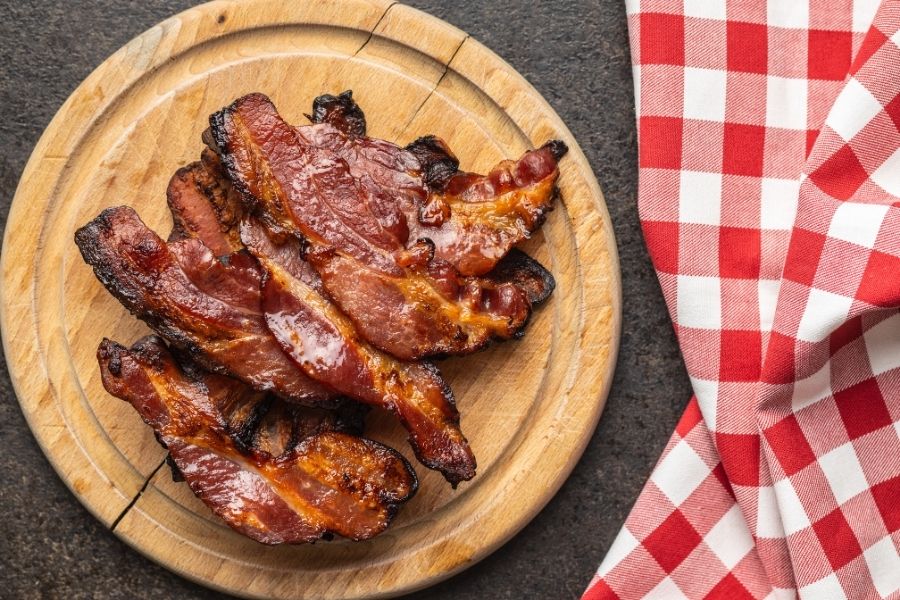 The situation becomes all the more complicated as the grease will putter out of the pan, all over the stovetop. This means extra cleaning work, but it’s also a fire hazard.

If you have an open flame close to there you’re cooking bacon, you can get yourself a terrible grease fire. If that is the case, turn off the gas immediately, and DO NOT THROW WATER ON IT !

Throwing water on a grease fire will only make it sputter and spread. It’s best to put a lid on it, or suffocate it on some way. It’s best to have an actual fire extinguisher at hand for these cases.

What to do with rendered oil?

The bacon does not take long to cook. It takes about 10 minutes and within that time frame, the bacon may render enough fat that you may have to drain it from the pan after you are done with the cooking.

You should pour the fat in a jar if you want to use it later with some other dishes. If you want to throw it, you can also pour it in a plastic bag once the liquid fat cools down but before it solidifies.

This detailing about how to use the excess rendered fat was just to make you understand how much of fat is there in the meat. It’s a lot and you absolutely don’t need to add extra fat to cook bacon.