Durians. As great as they may taste, the smell makes most people turn away from them. If you’ve never had this spiky, confusing fruit, then you may be curious to know just what a durian smell like. And why everyone’s so impressed by it, be it in a bad or good way.

Well, this is what we’re going to cover today so hopefully you’ll get all the answers you were looking for. We’ll see just what durians smell like, if everyone agrees on the smell, and how to pick a great durian so you can try it for yourself. 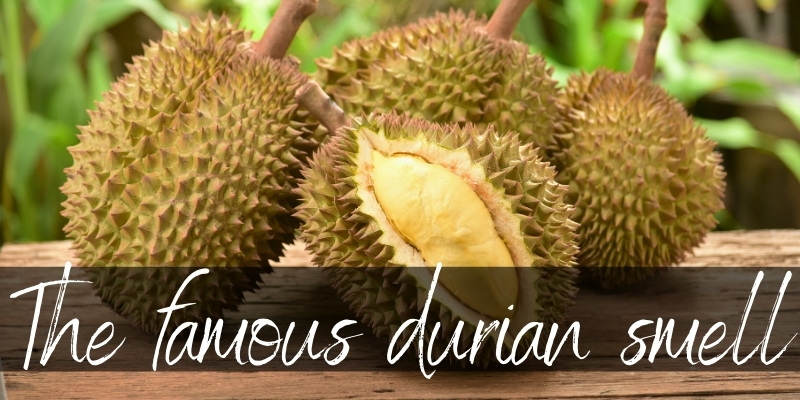 Durian has a very pungent smell that is best described as onions, rotting meat, stinky cheese, and something very similar to gasoline. It’s been described as ‘turpentine and onions, garnished with a gym sock’ by a famous food writer (Richard Sterling).

There is something about the smell of a durian that just seems to put people off. It’s so bad that you’re not allowed to bring a durian with you on public transit and hotels in Singapore !

It’s not only the smell itself, as in the various stinky notes. It’s how strong the smell is. It managed to reach all the way into the pilot’s cabin, if you’re on a plane.

Why does durian smell so bad ?

The reason durian smells so bad has actually been discovered by science. Durian releases a chemical compound called ethanethiol, which gets stronger and stronger as the fruits ripens.

Ethanethiol is made up of different chemicals that can be found in other foods, lending them their smell. A study managed to break down all the components that make up the powerful smell. It turns out there isn’t one but 50 different compounds that give durian its potent scent.

There’s the smell of leeks, onions, rubber, the smell of something burnt, honey, and so much more. In short, durian smells terrible because it’s made up of a bunch of other smells.

Read also: Why Is Durian So Expensive ? 4 Big Reasons

Does durian smell bad to everyone ?

Some people aren’t put off by the smell of durian. Those are mostly the Thai folks, and those who have grown up eating durian or are somehow used to very strong smells.

Much like other strong smelling foods, durian takes a while to get used to. For example eggs, fish, broccoli, or even some nice and stinky cheese are all foods that no one bats an eye at, in the West.

That’s kind of the same for durian-loving countries. That’s not to downplay just not strong durians smell, don’t get us wrong. It’s just that when you grow up with something, you don’t notice it and it doesn’t bother you as much.

And a very interesting fact: durians are more of a treat and celebration fruit. So those who eat durian regularly associate it with some sort of festivity, and the smell becomes even less offensive.

Durians are native to Southeast Asia, which is a popular destination for many tourists. If you find yourself in one of those countries (like Thailand, Malaysia, Singapore, Philippines, or Cambodia to name a few), try to suppress your first impressions of durians.

These fruits are very loved there and are a cultural heritage.

Despite durian’s awful smell, it tastes sweet. It reminds you of custard, almonds, vanilla, and some say even caramel. It’s not the sweetest fruit, but the contrast between the awful smell and the pleasant taste really impresses people.

This fruit is usually eaten raw, on its own, but you may also find foods and desserts flavored with durian flesh. The flesh itself is fairly little on the fruit, with the smell and the seeds taking up a large portion.

While you can’t eat the shell (spikes and all that), you can roast the durian seeds and eat them.

Don’t try and eat the seeds without cooking them ! They can be harmful to humans if uncooked, so make sure to grill, roast, boil or heat them up in some way before eating.

Now let’s see how to pick a nice, fresh durian so you don’t end up with one that’s both rotten and smells terrible.

How to pick the perfect durian

Picking the perfect durian isn’t as difficult as it might sound, but it may be tricky if you’ve never done this before. What you need to look for a is a durian that actually smells.

Yes, if the durian doesn’t smell, or smells very little, it’s not ripe yet. As easy as it may be on your nose, it won’t be really edible.

You need to look for a durian that smells fairly strong, but at the same time a little earthy and fresh. Once you get used to the smell, you’ll easily detect those notes as well. 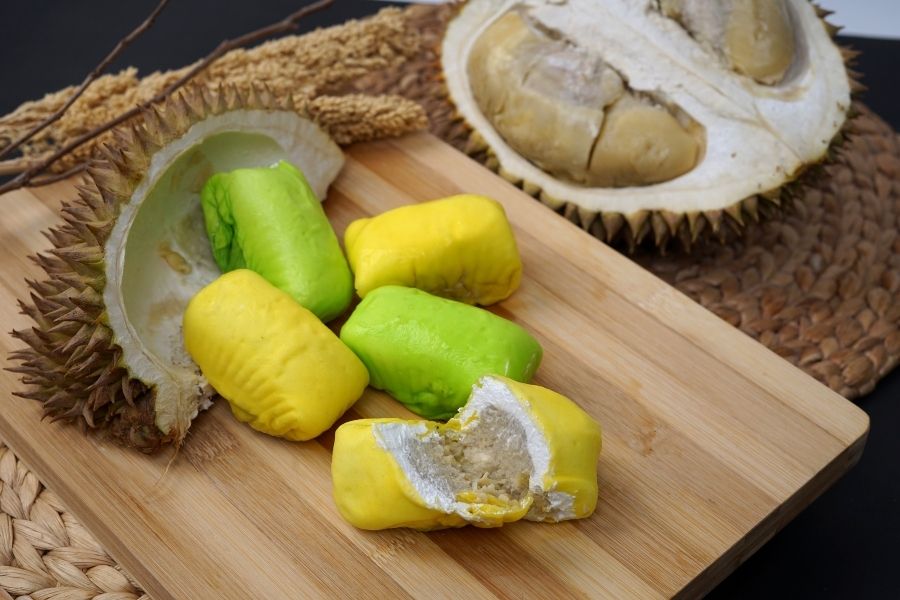 Another thing to look for is how soft the outer shell is. Despite all the spikes, if you press a durian with your hand, it should give a little when it’s ripe, just like an avocado or kiwi.

Of course, you can buy an underripe durian and keep it in your home for a few days, until it ripens. It will smell from a mile away though, so prepare yourself mentally.

Here’s what to avoid then looking for a fresh durian:

And yes, if you’re feelin overwhelmed by durians why not ask a local to help you out ? Most of the time people are friendly, and some may even take extra pride in showing you the perfect durian if you’ve never had it before.

Read Also:How To Tell If Durian Is Rotten

Durians smell terrible, but taste pretty good. Especially when you compare the two senses. If it’s your first time buying a durian or tasting it, it may be too strong of a smell but you will get used to it if you interact with it regularly.

After all, there are people who love durians, so there has to be a way to tolerate the smell. Here’s hoping you’ll get to enjoy this fruit too.