Poutine is one of the most famous dishes and also one of the simplest and most comforting. There’s the gravy, the cheese curds, and the glorious fries. But does the wonderful poutine have any meat in it ? What’s the gravy made of ?

Today we’re taking a look at this simple yet delicious Canadian staple, so let’s find out together. 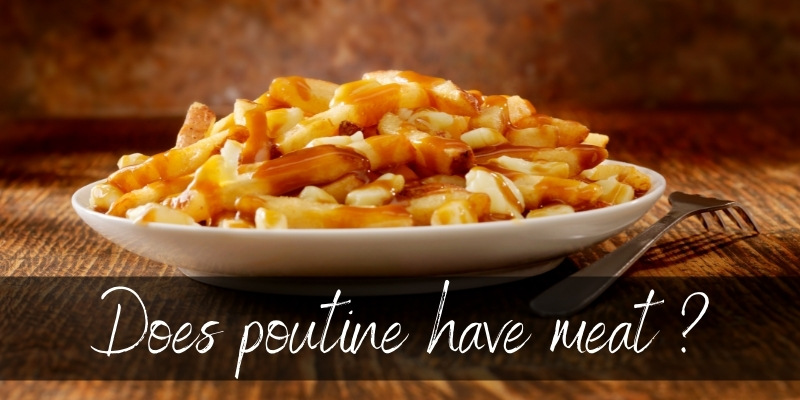 Table Of Content show
1 Does poutine have meat ?
1.1 What meats go with poutine ?
1.2 Does poutine go well with alcohol?
2 Tips on serving the best poutine possible
2.1 Always make poutine after a roast
2.2 Use thin fries, and make sure they are 100% crispy
2.3 Use fresh mozzarella balls if you can’t find proper curds
3 Is poutine good the next day ?
3.1 How much gravy do you use for poutine ?
4 Where did poutine originate?

Does poutine have meat ?

Poutine is made of fries with cheese curds and beef gravy on top. Hence, it does have meat in it because the gravy is made of beef stock. Vegetarians can’t eat poutine in its traditional form.

Poutine does have some beef in it, in its traditional beef gravy version. The beef gravy may be switched to another meat, such as chicken, pork, duck or anything you like.

However, there is the option of swapping the beef gravy with vegetable gravy. After all, it is not that hard to make it as the ingredients are pretty accessible. To get a rich, umami flavor in a veggie-based gravy, be sure to add shiitake mushrooms and a clove of garlic. And for an entirely vegan meal, swap the cheese curds with nutritional yeast. It looks a lot like shredded parmesan, and it brings a umami and nutty flavor.

What meats go with poutine ?

Poutine can be made with any meat you like, as long as you pair it nicely with the gravy. The key to great poutine is to not smother it in meat, and instead let the gravy take over in terms of flavor. Remember that this is a snack, not an entire meal.

If you do want to add extra meat, try not to stray from the key points of poutine: delicious, simple, easy to put together. So be sure to add something simple to eat and bite-sized, like bacon chunks, pulled pork, braised beef or chicken.

Read also: Does Gravy Have Dairy ?

Does poutine go well with alcohol?

Poutine does go very well with alcohol, as long as you consume both sparingly. Both poutine and alcohol are high in calories and should not be the only real food you eat throughout the day.

However when you do see poutine on a bar table somewhere, it’s usually accompanied by beer. Of course you can pair it with anything you like, but beer seems to be the most natural choice.

An interesting take on the gravy would be to add a glug of beer, wine or, brandy to the gravy. Mostly for flavor, since the alcohol will cook off as the gravy simmers.

You might think poutine is just a plate of fries with a bit of cheese and gravy on top. In truth, it is exactly that and so much more. The fries are there to provide structure and something for the gravy to cling to. The cheese should be soft and squeaky, not aged at all. And the gravy should be fairly thin, but not completely liquid.

In the end, if you’re simply hungry any poutine will do. But here are three keys to getting the perfect plate of poutine outside of Canada. 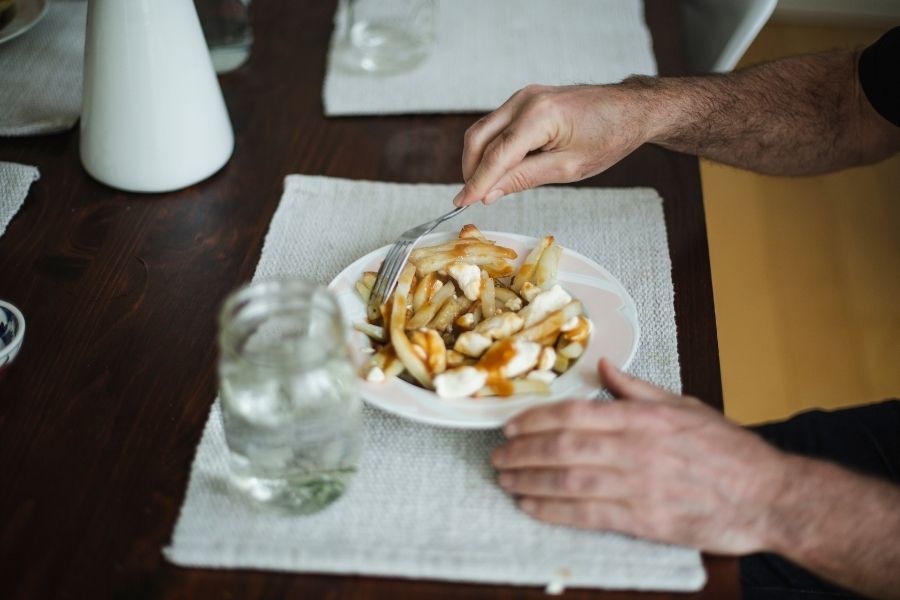 Always make poutine after a roast

A good ol fashioned poutine starts with good ol fashioned beef roast. Or any sort of beef stock, usually something leftover from a roast. Juices left from a steak are not okay, we need the browning of a piece of beef left in the oven for house on low.

For this reason we recommend making your poutine gravy after you’ve made roast beef, with the leftover juices in the pan. If there are any bones left do not throw them away !

Alternatively, you can get some beef, bones and all, specifically for this reason. Just do you best to not use instant gravy or bouillon cubes, because the overall flavor will be pretty different.

Use thin fries, and make sure they are 100% crispy

Everyone makes fries the way they want., and that’s totally okay. But not when making poutine. For this dish, you need the skinny fries that get crispy all the way through. You can definitely pull this off with homemade fries, but the extra moisture in the potatoes will often result in a soft french fry.

So. What we recommend is you either use the French method and double-fry the potatoes, or use frozen fries. Those always come out crispy all over.

Just don’t use potato wedges, or steak potatoes. The fries have to be pretty thin so the gravy can drizzle down and coat all of them. Big chunky fries will be too much potato.

Use fresh mozzarella balls if you can’t find proper curds

If not, you can try fresh mozzarella balls. The ones that are still in their whey package. They will be nice and squeaky, and whey will also get a little bit gooey if the fries and the gravy are steaming hot. A perfect, hot, saucy mess !

Is poutine good the next day ?

No, poutine won’t be very good the next day as it will lose its texture and become soft and soggy. The fries will absorb the moisture from the gravy and become soft. You can try baking the poutine under the broiler, but the very middle of the dish will still be wet.

The best thing to do if you’ve made too much poutine is to mash it roughly with a fork, and incorporate it into an omelette the next morning. It will be a very hearty and filling meal, and it might even work as a brunch or lunch !

How much gravy do you use for poutine ?

When building your poutine plate, try to only coat the fries in a little gravy, don’t drench them. Too much gravy and the fries will become soggy. A good rule of thumb is a single ladle of gravy per serving or per person.

That being said, you should also take your own preferences into account. Some folks like to keep their gravy separate from most of the fries, while others like all the gravy on all the fries.

Where did poutine originate?

Poutine was first made somewhere in Quebec in the 1950s. The exact establishment to first serve poutine is unclear, and it took a few decades for poutine to become well known throughout Canada. In its first years it was regarded as a regional treat or snack, and it was served mostly in Quebec due to easy access to fresh cheddar cheese curds. The ‘fresh’ was an integral part of its flavor, and when some chefs tried to serve other cheese curds, the dish wasn’t as delicious.

The composition of poutine made many people regard it as something sloppy and filling, to eat after a night of heavy drinking. Its reputation declined but it did not disappear from people’s minds. This continued until it somehow became widely accepted, and many people credit chef Martin Picard. He served poutine with foie gras, which was very well received.

After this several upscale restaurants began adding poutine to their menu. Nowadays you can get poutine in restaurants, fast food joints, roadside bars, or just make it at home.