You’ve definitely heard of Colby and Cheddar, and may have even tasted them. These two American staples are present in so many dishes, sandwiches, and are the star of the show when it comes to mac and cheese.

But what is the difference between Colby and Cheddar cheese ? After all, they seem similar but they have to be different, else they’d be the same food item.

This is what we’re going to talk about today, and clear up the confusion. 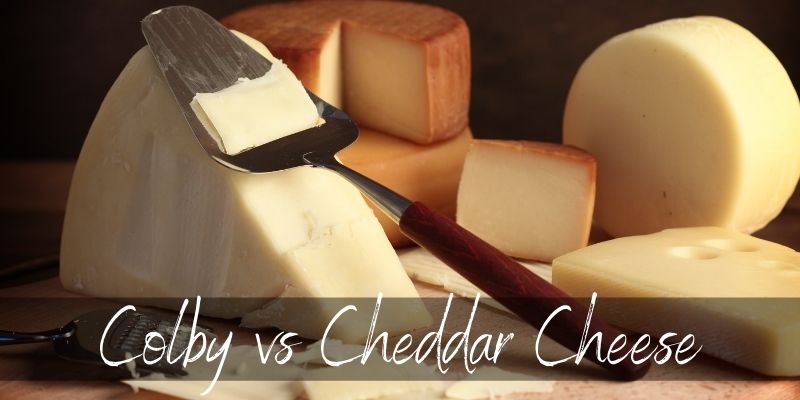 Main differences between Colby and Cheddar

The difference between the Colby and Cheddar cheese depends on a wide range of factors, such as the cultures used, the temperature setting, and its duration.

Other factors include cutting the curds, whether these curds are rinsed, and many more. All these factors add up to affect the cheese’ texture, aging characteristics, creaminess, taste, etc.

Even though Cheddar cheese strikes some similarities with Colby, the later is taken while still young and doesn’t have that distinctive sharpness of the aged Cheddar.

Moreover, the Colby cheese texture tends to feel softer than Cheddar because it is washed, then pressed. Meanwhile Cheddar is left to marinate in the protein acidic whey.

Cheese making is a very complicated and complex process, and some recipes may be very similar to one another yet still produce different cheeses.

The Cheddar cheese is the kind of semi-hard cheese that is made from the cow’s milk. Its taste varies from a highly incisive to mild.

All in all, it is among the most popular cheese worldwide, thanks to its introduction by the British, who were the first to make it, before later introducing it to their colonies.

On the other hand, Colby cheese is a complete American cheese, also made from the cow’s milk and has a semi-hard stature, similar to that of Cheddar.

Typically, this cheese is made from pasteurized milk. It has a short aging process and most popular among US citizens. Even though some people will use Cheddar and Colby cheese interchangeably, both actually have varying flavor profiles.

1. Cheddar is a British cheese, Colby is American

Cheddar cheese has quite a long history. This type of cheese has been manufactured ever since the 1100s in a village known as Cheddar, located somewhere in the South-western part of the United Kingdom. 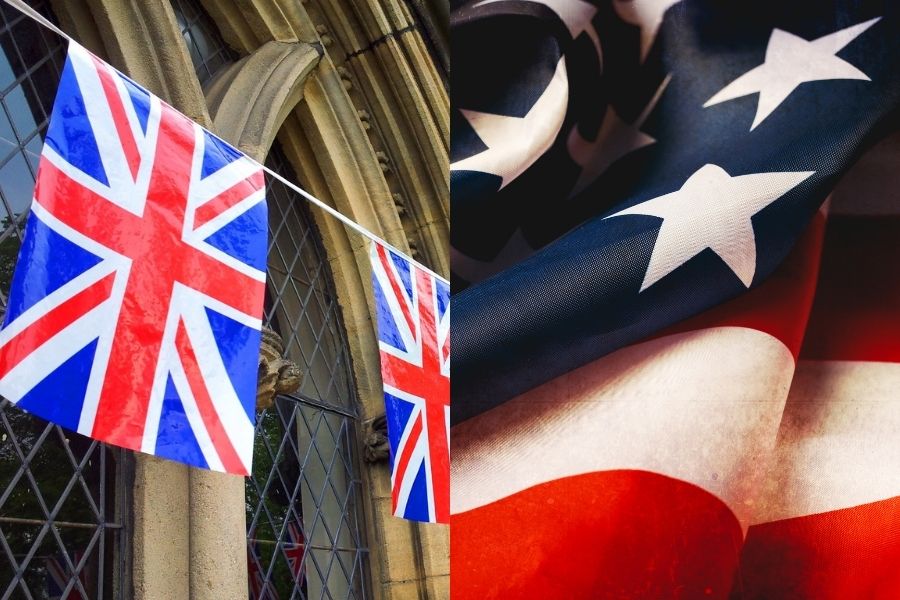 Nowadays it’s thought of as an all-American cheese, and in a way that’s true.

The Cheddar cheese being manufactured today is only generic, as the real, old-school Cheddar which was made in the UK at the time, is referred to now as Western Country Farmhouse Cheddar. It’s easily recognizable as it comes with a seal that shows its origins.

Unlike Cheddar cheese, whose first manufacturer can be traced to the 1100s, the Colby cheese first appeared in the late 1800s.

The person documented to have first made this cheese was Joseph Steinwand, who was from Wisconsin. He developed this cheese purposely for his father’s factory, to get a share of the cheese market.

As more and more people started consuming this cheese, it became quite popular in the coming centuries. Colby prided itself as one of the first American-made cheese that did not borrow from the European-made cheese.

Thanks to the multiple different methods used to manufacture Cheddar cheese, it can be made into various distinctive tastes and flavors.

Usually, a starter culture is added to the cow’s milk and then set using rennet. Once the milk turns into curds, it is stirred vigorously over a heat source to make it release whey and reduce its moisture content.

Afterward, the curd is pressed through a select method referred to as cheddaring. The curd blocks are carefully placed, one on top of the other to release the whey. This stacking and re-stacking process are done several times until this cheese attains a stringy texture.

It is then cut and salted, producing the final blocks of cheese.

With the Colby cheese, its manufacturing process starts just like Cheddar. However, this one is not put through the cheddaring process.

Unlike Cheddar cheese, this one is washed with water before it is stirred. This stirring gives this cheese that open texture, which is not present in Cheddar, after which it’s salted.

Another thing that happens when the curds are washed is that the acidity goes down, resulting in a milder, less sharp cheese. This makes it a decent alternative to Gouda cheese, actually.

During salting, a mechanical press is used to remove the whey. Afterward, it is dried out and kept in a temperature-controlled place to mature.

3. Colby is milder, while Cheddar is nutty

Many people notice Cheddar cheese through its orange color. However, this color results from the use of a natural food coloring known as annatto.

Typically, the Cheddar cheese is a pale white or creamy color when being manufactured. Depending on how your cheddar cheese is processed and the time allowed for the aging process, the cheese can come in a wide array of flavor profiles, from a very sharp to mild.

The more the cheese is aged, the sharper the Cheddar cheese flavor will be. Also the annatto flavor will be more distinct, lending a nutty, somewhat spicy tinge to aged Cheddar.

Most people will argue that Colby cheese’s flavor is like that of Cheddar. This argument is valid to some extent, as most cheap Colby you will get at the store is almost hard to distinguish from mild-flavored Cheddar.

But a shoulder to shoulder comparison proves something different. The Colby kind is milder and creamier as compared to Cheddar. It possesses a more significant moisture content and often softer.

Unlike Cheddar cheese, this one doesn’t age well and will mostly get cracks when dry. To enjoy its full flavor, it ought to be taken while still young.

To be clear though, young Cheddar is very hard to tell apart from slightly aged Colby, so be very careful when reading the label.

4. Cheddar is noticeable in food, Colby is milder

Cheddar is primarily used to make soups or shavings used in roasted vegetables. Besides, it can be grilled and used in thickening polenta. Some people also love adding it to garlic bread to give it that cheesy flavor. To enjoy the full flavor, its better served at room temperature.

As for Colby, you can use it as a table cheese or blend it with other cheese types, such as the Monterrey Jack Cheese. For those who love Cheddar cheese, you can mix it with Colby to reduce the sharp flavor.

Furthermore, it can be grilled and also goes well with pears, rye bread, and apples.

If you were putting together a cheese platter, then Colby would be one of the milder cheeses to pair with a really sweet jam, or some prosciutto.

This is the real question, in a way. Flavor or no flavor, that can be fixed with spices and some add-ins.

But melting properties seem to be what most folks look for when they pick out a cheese. 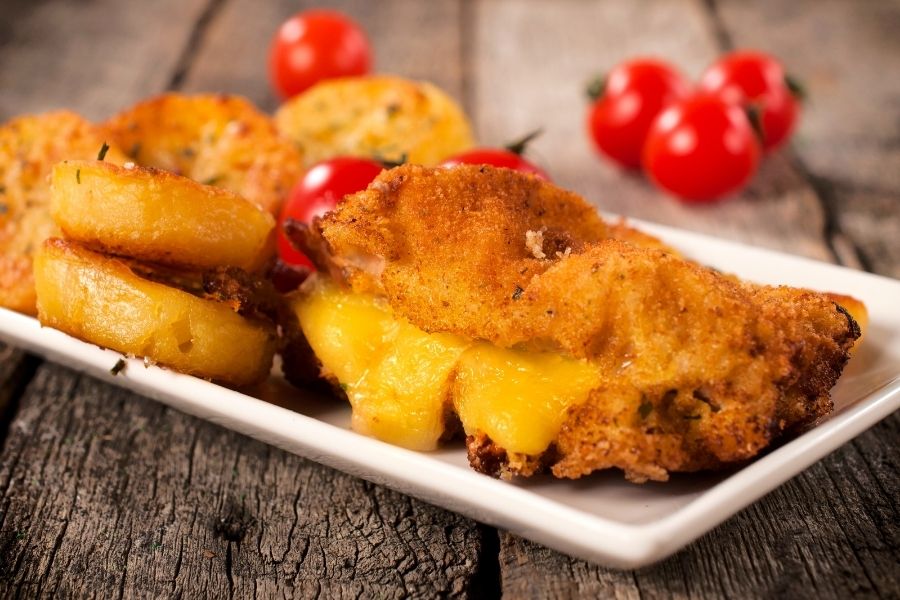 So which melts better, Colby or Cheddar ? It seems both cheeses melt very well, maybe aged Cheddar melts a little better. It’s drier with a higher fat content so you may get a Parmesan-like situation.

That being said, if Colby is all you have then that will work too, just know it’s going to release a little more moisture in your food.

Another important point when talking about melting cheese, keep in mind that you will almost always need more cheese than you think. Both for flavor and for stringiness and for that extra oomph, maybe throw in another handful of cheese.

To sum up, both of these cheese types are popular. But have you ever stopped to think about the difference between a block of Colby and that of Cheddar cheese and wondered if you can use them interchangeably ? Well, we hope this article answered all your questions.

Overall, both types are a nutritional addition to a balanced and healthy diet. They are an excellent source of calcium and protein, not forgetting the associated health benefits, such as enhancing weight loss, promoting gut health, decreasing cardiovascular disease risk, and improving bone health.

Nonetheless, some particular types of cheese are high in fat or sodium, so you better track your intake as too much of this could negatively impact your overall health.