Ah, pumpkin spice ! It’s the heart of fall, there’s no walking around town without catching a whiff of it. You might even have some in your pantry right now.

Pumpkin spice has become an essential part of fall, especially since Starbucks came out with their world-famous Pumpkin Spice Latte.

But does pumpkin spice have any actual pumpkin in it ? You might think it does when you look at the name. But the truth is a little different, and this is what we’ll discover today.

And yes, we’ll talk about the PSL too, don’t worry ! 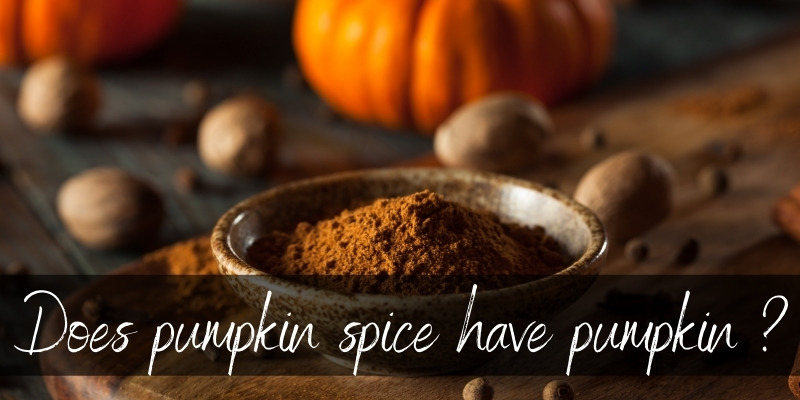 Does pumpkin spice have pumpkin ?

No, pumpkin spice mix has no pumpkin in it. It’s a traditional mix of fall spices, usually added to pumpkin pie. The spices are cinnamon, nutmeg, cloves, allspice, and sometimes ginger.

Each individual spice comes in varying proportions, according to each manufacturer. Some may have a lot of nutmeg and ginger, some may not have cloves at all.

What about pumpkin spice latte ?

Taking a look at the recipe on their site, a 16 fl oz serving of PSL has:

Let’s take a look at that pumpkin sauce for a bit. On their site the ingredients are :”sugar, condensed skim milk, pumpkin puree, contains 2 or less of fruit and vegetable juice for color, natural flavors, annatto, salt, potassium sorbate”.

So yes, there’s definitely some amount of actual pumpkin in a PSL. As for their pumpkin spice topping, it’s cinnamon, ginger, nutmeg, and clove. 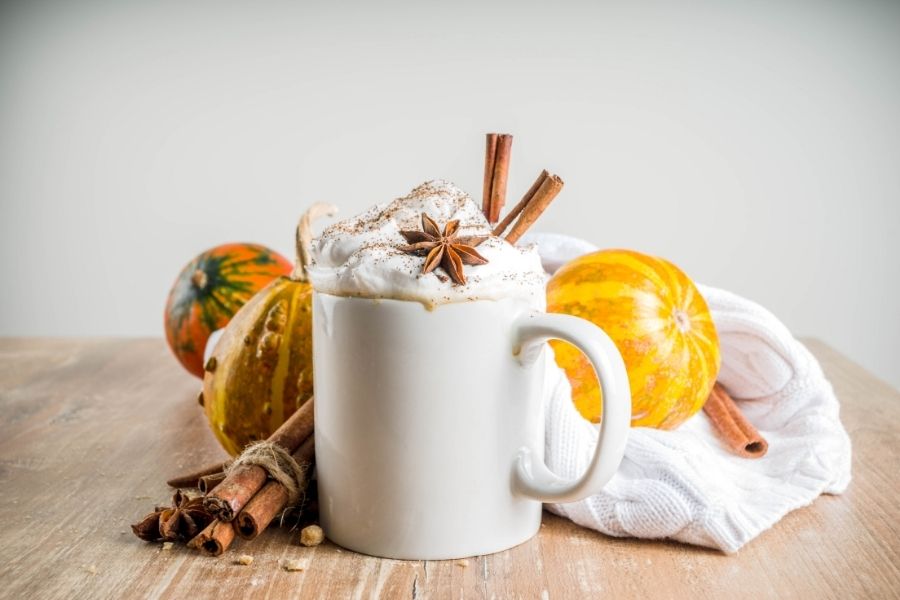 What is pumpkin spice, anyway ?

Pumpkin spice is just a pre-made spice mix that was born sometime in the ’50s in America. Manufacturers put it on the shelves as a shortcut for home cooks, especially around Thanksgiving.

The spice mix was essentially the same as today: cinnamon, cloves, nutmeg, allspice, ginger in varying proportions. Because it was so convenient it became a staple of fall flavors, and nearly every sweet food item had a dash of pumpkin spice.

In truth, pumpkin spice is not exclusive to pumpkin pie. You can easily use it with other ingredients, like apples, peaches, in a cinnamon roll, banana bread, hot chocolate, anything really.

What spices go in pumpkin spice ?

These are a lot of spices you can use to season anything pumpkin-based, but there are a few that are absolutely traditional. Cinnamon and nutmeg are non-negotiable. They’re the heart and soul of fall, so they go in every baked good from September to… well, actually they’re common throughout winter too. So if you’re not a fan, expect them to die down by February.

Cloves are a common addition as well, sometimes accompanied by star anise. This brings a licorice-like flavor, vaguely reminiscent of mint but without the menthol.

Allspice is another option, slightly peppery in flavor. Kind of like a cross between a dull cinnamon stick, and black pepper. Use sparingly because it can take over the entire dish, much like nutmeg.

Although it’s not common you can also find vanilla in some pumpkin spice mixes. Whether it’s vanilla flavoring or actual vanilla beans, the final result is a warm tone. It takes the edge off harsher spices like nutmeg or allspice.

You can also find ginger in a pumpkin spice mix ! Yup, it’s got a lemony-spicy flavor that goes great with everything, regardless of season. And it pairs amazingly well with cinnamon !

Can you substitute pumpkin spice for apple spice ?

Yes, you could swap the two. There are a couple of differences between them, but the ingredients are mostly the same, and in slightly different proportions. 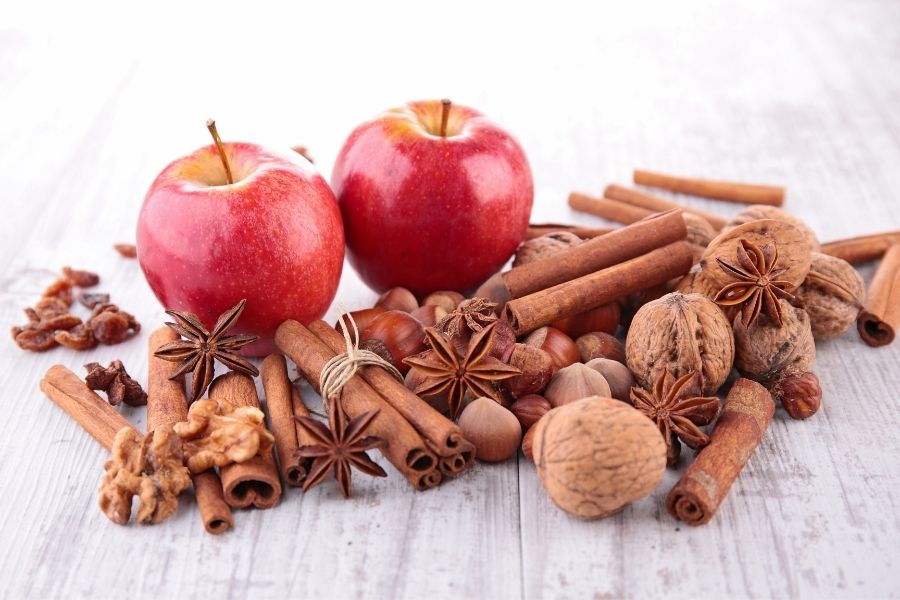 You’ll only notice a significant difference in flavor if you have a strong opinion on cardamom or cloves.

Make your own pumpkin spice !

Okay, what if you can’t find any pumpkin spice where you usually shop ? Or maybe you want to make your own mix ? Whatever the case, pre-made pumpkin spice is amazingly easy to replicate at home. The biggest factor is your taste buds, and what your spice preferences are.

How much of each spice you use is entirely up to you. We just remind you that nutmeg and allspice are very strong, so you may want to go very easy on them. Cinnamon is usually the bulk of the spice mix, but you can get creative !

Don’t add sugar just yet. You never know what you’ll be adding this spice to. If you add sugar with the spice mix, it will be hard to control the amount of sugar in your desserts or drinks.

Did you know you can make your own pumpkin sauce ? After all, the ingredients are right up there and the recipe itself is easy. If you don’t feel like roasting an entire butternut squash, you can just get a can of pumpkin puree.

It might be a little thicker than you like, but remember that you’re adding it to a drink, so it will dilute a lot. Still, if you want to dilute it you can add some water or milk. If you add milk it won’t be shelf-stable, but it may taste better.

So get your pumpkin puree, and now we have to add the milk. It’s up to you if you want to use condensed milk, or powdered milk. Condensed milk will make it a little thicker, and sweeter.

And finally, add your spice mix. Add a little at a time and keep tasting. It should be stronger than you’d like, because you’ll be adding just a few pumps to a drink and the flavor will dilute.

If you’re wondering if you can use pumpkin pie filling, then yes you can just keep in mind that it’s already spiced and sweetened. Not heavily, but be sure to check it for flavor. All it’s missing is the milk, evaporated, condensed, or powdered.

And that’s it, now you can make your own PSL at home ! You’ve got the spice mix, the pumpkin sauce, and you’ve most probably got the espresso ready too.

So have at it, and enjoy the cold season !