As fall rapidly approaches – summer is ending in a month, you know – our minds turn to rusty leaves, cool air, pumpkins and the ever-present spice mix that’s in everything, everywhere. We’re big fans of that, feel free to judge us.

One thing that’s always in that spice mix is cinnamon, no matter what else is in there. And you may be tempted to bring the cold season sooner with a bit of cinnamon in your life.

So, naturally, you go for a cinnamon-laced coffee. But it turns into a sludge and makes your coffee nearly impossible to drink. Why is that ? Does cinnamon even dissolve ? Here’s what’s happening and how you can avoid that. 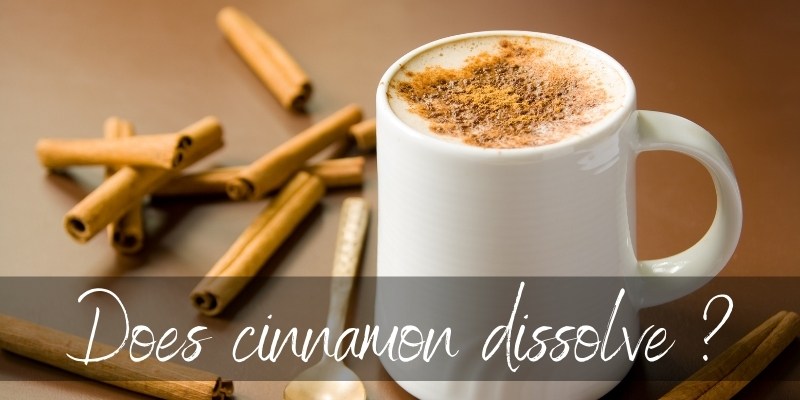 No, ground cinnamon cannot dissolve because it is plant fiber. Cinnamon is actually the rolled-up bark of the Cinnamomum verum tree, and like any tree bark it cannot dissolve in water. The only way to incorporate cinnamon into a liquid is to steep cinnamon sticks, or to use a drop of cinnamon oil.

The pumpkin spice mix does include cinnamon and it’s not really meant to be dissolved in water or coffee. It’s meant to be used in pumpkin pies, pastries, cakes, or anything that has a bit of texture.

For drinks the cinnamon flavor comes from the added cinnamon oil. It’s incredibly potent and you only need a little to bring attention to the cinnamon.

Read also: Why Are Pumpkins Orange ?

Why is cinnamon spicy ?

Cinnamon is spicy because its essential oil is spicy, and it contains about 90% cinnamaldehyde. That is a compound that can lead to skin irritation if applied directly to the skin without first being diluted with a carrier oil. A small amount of ground cinnamon won’t be spicy, but a heaping teaspoon will definitely give a strong, spicy kick.

There are two main types of cinnamon, Cinnamomum verum and Cinnamomum cassia. The verum variety is the sweeter, less spicy, milder version that is completely pleasant to taste. It has much less cinnamaldehyde in its composition, letting you taste sweetness and overall flavor of the cinnamon.

The cassia variety is the strong, spicy cinnamon. It’s also the most commonly sold cinnamon, and the one you’re most likely to have in your spice cabinet right now.

Both varieties do the job just fine, though the cassia can be a bit much for some people.

Why does ground cinnamon turn slimy in water ?

Cinnamon turns slimy in water because it’s a fibrous powder, and its fibers will absorb as much moisture as they can. This leads to the creation of a slimy sludge, and it can effectively trap the passage of water.

How to use cinnamon in food and drink

You’re definitely going to want to add cinnamon to everything in the following weeks, so here’s a handy guide on how to add it and which type works best for whatever you’re preparing.

Always remember that less is more with cinnamon. It can really overpower your foods and drinks, so don’t add too much. And if this is something you’re preparing today and having tomorrow, you should know the cinnamon will be even stronger after it’s had a chance to sit and develop its flavor. Don’t overdo it.

Cinnamon oil is the purest form of cinnamon flavor, and it’s also the hardest to work with because it’s all too easy to use too much. Really, a single drop of cinnamon oil is enough for a tray of cookies ! Since the oil is where most of the flavor resides, you’re going to get a lot of payoff for using this.

This method works great if you’re preparing something liquid, like coffee, tea, creams, ganache, and it even works for cake batter and cookie dough.

For drinks, only dip a clean toothpick in the cinnamon oil, then dip that in your drink. Don’t add more than that because this is a really strong flavor, you don’t want to overdo it. 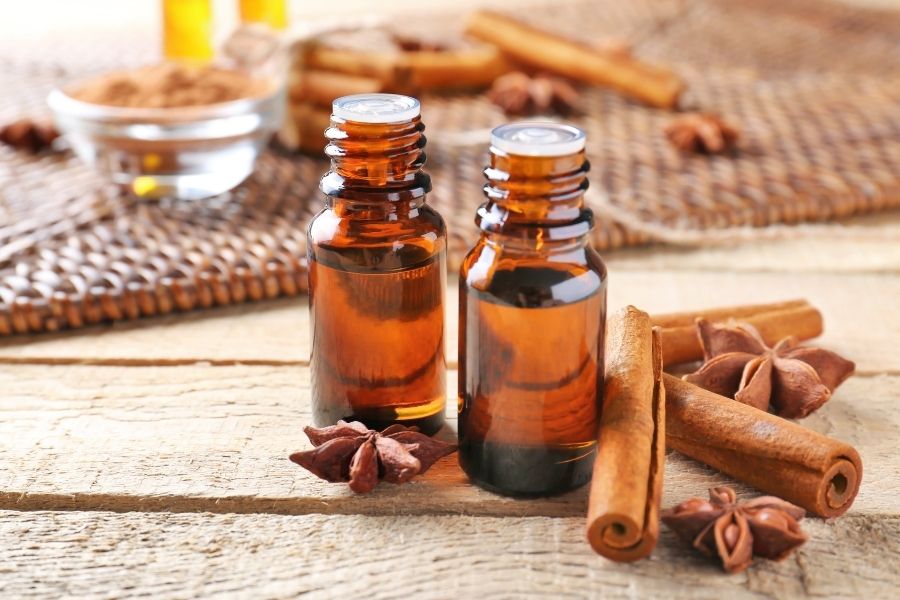 Cinnamon sticks not only look great, but they’re also a great way to add flavor. You need to steep these in hot water, or in some tea, or milk, or coffee, or anything you like. The flavor will seep out of the cinnamon sticks and blend into what you’re preparing. This way you get no sludge.

Another great way to use cinnamon sticks is to throw 2-3 of them into where you store your ground coffee. As the sticks sit with the coffee, they will infuse it with cinnamon flavor. The coffee won’t taste completely of cinnamon, but it will have a nice, subtle hint.

The downside of using cinnamon sticks is that you can’t really reuse them afterwards. So you’re kind of wasting them. Oh, one more thing you can do with cinnamon sticks: grind them at home to make your own fresh ground cinnamon. It always has a stronger flavor.

Ground cinnamon is the most common way to add some cinnamon into anything. This works great for things that have texture, like porridge, cakes, pastries, creams, even whipped cream.

The more you leave ground cinnamon opened, the more the flavor will evaporate. So if your packet of ground cinnamon was opened half a year ago, you won’t be able to do much with it. It’s lost nearly all its flavor, and it will only taste like sawdust.

Can you use cinnamon in hot coffee ?

Yes, you can use cinnamon in hot coffee by steeping a cinnamon stick, or adding less than a drop of cinnamon oil per cup of coffee. Don’t use ground cinnamon because you’ll get some really difficult sludge and drinking your coffee will be a pain.

If you’re looking to get that spicy flavor in your coffee but don’t want to add ground cinnamon, there a re a few things you can use instead. The key here is what you’re trying to achieve.

Do you want that pumpkin pie spice flavor ? Reach for a pumpkin spice mix, as it will have cinnamon along with other things.

Do you want the pumpkin in pumpkin pie ? Look for a pumpkin syrup, Starbucks doesn’t have the only bottle. A quick search on Amazon will net you 5-10 brands that offer this kind of flavor.

Do you want to go for gingerbread ? There are gingerbread syrups, along with the speculoos version (Dutch ginger and cinnamon cookies).

Do you want spicy, but not cinnamon ? Go for the other spices like cardamom, nutmeg, clove, star anise, and maybe even ginger. They can be sweetened to your taste, and they provide a very different yet spicy flavor than cinnamon.

A completely different option is to add a chai or masala spice mix to your coffee. It’s the spice mix that goes into chai (black tea with spices and milk).

And there you go, you’ve got a whole slew of options to make your coffee (or tea) that much more appealing as you wait for the first leaf to turn yellow.