Ever needed to make a quick pumpkin pie but got stock on the filling ? If you’re in a hurry you might not have noticed you picked up a can of pumpkin puree, instead of pumpkin pie filling.

Does that spell trouble for your pie ? Is there any way you can use that puree ? Luckily for you the situation isn’t dire. In fact it’s totally salvageable.

We’ll guide you through the difference between pumpkin pie filling and pumpkin puree so your pie will be safe. And we’ll show you how to make your own pumpkin mix, if you’re in the mood for a DIY ! 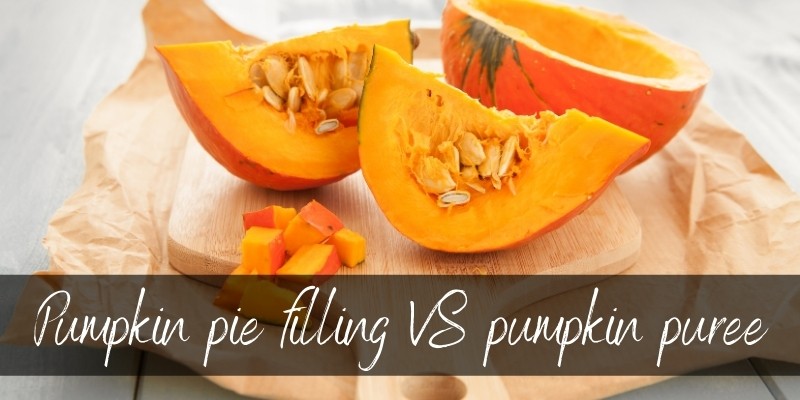 Canned pumpkin puree has only roast pumpkin, and nothing else. No added sugar, no added spices. Just roast pumpkin, that’s been already blended for you into a fine puree,

Which you use depends on what you’re making. If you’re making pumpkin soup then you need canned pumpkin puree, with no added sugar or spices. The same goes if making anything savory that’s pumpkin-based.

When making pumpkin pie, you will need more than just the canned pie filling. If you look closely at the can, it tells you you’ll need evaporated milk and two eggs to whip up the filling.

Why is that ? Because if they were to can the whole mix – eggs and milk included – it would not be shelf stable. Mostly because of the eggs.

So be sure to pick up a couple more ingredients when shopping for pumpkin pie filling. If you have what you need to make the crust at home, you’re good. If not, you may want to add those ingredients too. Or maybe you can find a frozen pie mix as the freezer section.

Okay, now let’s talk about how to use that pumpkin puree you bought by mistake.

You can swap pumpkin pie filling for pumpkin puree

If pumpkin puree is all you’ve got, don’t worry. You can still use it, you just have to add the spices that usually go into pumpkin pie. This is actually a blessing in disguise !

Why ? Because those pie mixes come pre-spiced and pre-sweetened. Using simple pumpkin puree means you have total control over what your pie filling will taste like.

So open the can, and taste it. How sweet is it ? Nearly all the time it will need some added sugar, so feel free to add as much as you like. If using granulated sugar keep in mind two things.

First, taste the mix after each tablespoon of sugar you add. It will melt into the mix when the pie bakes, so know that it will be sweeter than that.

Second, the spices will bring out the sweetness even more so go easy on it. It’s always easy to add, but you can’t take out any sugar.

Third, remember that evaporated milk has its own sweetness. In fact, it might be best to add the sugar last, after mixing in eggs and evaporated milk.

As for the spices, add as much cinnamon and nutmeg and cloves as you like. Most people stop at just cinnamon, and that’s fine. We recommend adding a couple of drops of vanilla essence in there.

Make your own pumpkin pie filling !

Alright, now let’s get to that DIY we promised. You’re in the mood for some home-made ingredients, right ? If not, you’ll disappoint the whole pumpkin patch !

Seriously though, the only thing that beats knowing you made that pie from scratch, is having more time for other fall activities. So if you’ve got some time and actually enjoy kitchenwork, then let’s go !

You’ll need to roast your very own pumpkin for this, and we recommend starting with a butternut squash if it’s your first time. Easier to handle, and way smaller.

If you insist on using a traditional pumpkin, go ahead, the process is mostly the same.

Preheat your oven, as high as it will go. Do your absolute best to cut the squash in two, lengthwise. The knife will get stuck several times, please be very careful and give it time.

Whichever pumpkin type you use, you now have to scoop out the insides. Grab a fork, a spoon, a spaghetti strained, what have you, and get to work on it.

Once the seeds and fibers are out, place it cut-side on a baking tray lined with a baking sheet. We recommend lightly spritzing the sheet with a neutral cooking oil, to make sure nothing sticks.

Let it roast for about 2 whole hours. It all depends on how thick the meat of the pumpkin is. If you’re using butternut squash it will take a little more time but yield more filling.

You’ll know it’s done roasting when it starts to cave in a little. Take it out, and by God let it rest. Do not handle hot roast pumpkin, you’ll burn your fingers off. Give it a couple of hours to rest, at least.

Once the pumpkin is sufficiently cooled, you’ll have to take out the useable part and discard the outer shell. You’ll need a big bowl to collect all the pumpkin, a tablespoon, and lots of patience. It will be a little sticky, a little slippery, and you may get some pumpkin juice all over you.

When you’re done collecting all the roast pumpkin meat, set it aside, and look for a mesh strainer or a sieve. The pumpkin has a lot of water, so be sure to strain that put as best you can.

You can leave it in, if you like. It makes for a moist cake if you’re using it like that. Depending on how creamy you want your pie filing to be, you will either use a fork to mash the pumpkin in the bowl, or put everything in a blender.

Mash or blend until you get the texture you like. Both ways are very easy and work well.

Now all you have to do is add the spices and sugar. No really, that’s it.

Once you’ve added everything, you can use all of it, or freeze it. Yes, roast pumpkin freeze amazingly well ! Just be sure to use an airtight container when placing it in the freezer. In theory it will be good by next Thanksgiving, but we really recommend you use it until then.

Yes, canned pumpkin is real, roast pumpkin. You may think it’s fake because of its texture. Canned pumpkin has been already pureed, and the water hasn’t been removed from it. So it’s a very runny, orange-looking pumpkin pure and it’s definitely pumpkin.

Try checking the ingredient label on the back, if anything’s been added you’ll see it there. Here’s hoping your pumpkin pie will turn out amazing and your Thanksgiving a success !

Best Kiwi Substitutes – 3 Ideas To Try, And Then Some !

How To Store Gooseberries So They Last Longer

Why Is White Chocolate White ? It’s In The Ingredients

What Fig Is The Sweetest ? Here’s What You Should Know

What Do Figs Taste Like ? Here’s What To Know