When you think of eating rhubarb, you probably think of pies, tarts, jams, and other delicious baked goods. But is it safe to eat rhubarb raw instead of cooked or baked and, if it is in fact safe, is it at all a palatable taste?

Read on to see what we found out ! 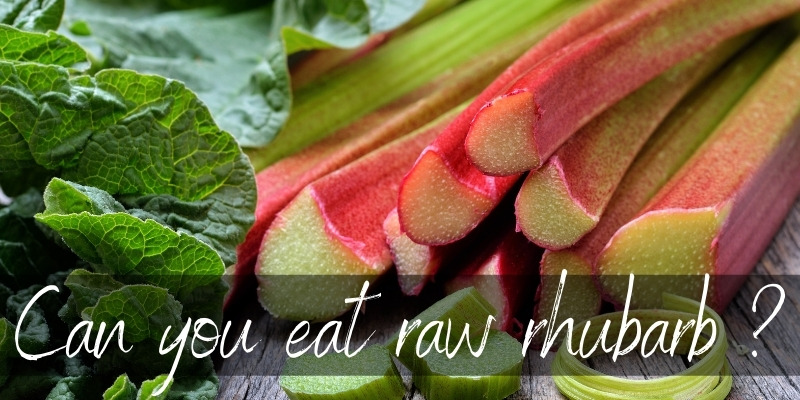 Can you eat rhubarb raw?

Yes, you can eat rhubarb raw as long as you are eating the vegetable’s correct parts, because some are actually poisonous to humans. Do not eat the leaves on a rhubarb stalk, they’re poisonous. The stalk by itself is safe.

Not only is it safe, but some people also absolutely love the crunchy, crisp snack and would be shocked to hear that you have never tried it. Now rhubarb on its own can be a little bitter, so there are some tricks to eating it (like dipping it in sugar), but it is perfectly safe and can be quite the tasty treat.

Before we can get into all the delicious ways you can eat rhubarb, let’s make sure everyone has a solid understanding of just what rhubarb is. It is a little bit strange. Rhubarb is a vegetable that looks a lot like celery, but the stalk is more of a pinkish purple color than just green. For centuries, people have been using rhubarb for baking and other culinary purposes and for medicinal purposes. For now, we will just focus on the culinary side.

What part of rhubarb can you eat?

So there is a good chance that you have heard that rhubarb is poisonous. There are several variations of that statement as some people say eating it raw is poisonous, and other people focus on certain parts. The latter is the correct statement.

As long as you stick to the stems/stalks of rhubarb, you will be perfectly fine. But you must stay away from the leaves because those are poisonous. Remember, stalks are safe, and you will be just fine.

This can get a little dangerous when you’re at the produce section and staring at rhubarb next to some Swiss chard. Why ? Because they look very similar, and are easy to confuse. Swiss chard is edible, stalk and leaves. Rhubarb, not so much.

What happens if you eat the wrong part?

Alright, so now that we have established that you can eat the stalks, but not the leaves, what happens if you eat rhubarb leaves? Well, rhubarb leaves are poisonous because they have very high oxalic acid concentrations, which is poisonous to both humans and animals.

When you eat oxalic acid in small quantities, it will probably just produce some more minor symptoms like gastrointestinal problems. Still, it can cause more severe problems like kidney stones, kidney failure, and even be fatal if you eat too much.

It takes a lot of rhubarb leaves to be fatal to a human. Even so, it is a good idea to reach out to a doctor or vet immediately if you or your pet have ingested rhubarb leaves.

How to eat rhubarb raw

Now that we have established what part of the rhubarb is safe to eat raw and what part is not safe to eat, how do you eat it and make it taste good? Raw rhubarb has a rather bitter flavor that most people do not enjoy by itself. Even if you are eating it raw, it is good to add something to it or eat something with it.

People enjoy rhubarb with a lot of different dips like brown sugar, white sugar, maple syrup, honey, and even flavored jello. You may notice that all of these dips are sweet. That is because the sweetness of the different dips creates a great contrast to the bitter flavor of the rhubarb to make a delicious treat.

It’s similar to dipping a granny smith apple into caramel. Of course, you can dip your rhubarb into whatever you want to, but we highly recommend keeping your dip sweet. However, some people do dip their rhubarb into salt and absolutely love it.

Dipping your stalks of rhubarb directly into a sweet dip is probably the easiest way to eat raw rhubarb. But making a rhubarb compote and adding it to yogurt or over fruit can be absolutely delectable. Like with the dips, the rhubarb bite is the perfect complement to a sweet yogurt or sweet fruit.

Finally, you could decide to cut up your rhubarb and add it to a salad, either fruit or on top of greens. If you are making a fruit salad made of deliciously sweet fruits, adding a little bit of rhubarb can give it a little contrast of flavor and texture. It is also great on top of a green salad as a little extra garnish.

What are some other ways to eat rhubarb?

Just in case you are interested, let’s go over a couple of the different ways you can eat rhubarb that is not raw. The most common is rhubarb pie and other baked goods like tarts and crisps. Those treats allow you to mix the rhubarb with sugar and fruits like strawberries to highlight the flavor and cut down on the bitterness. 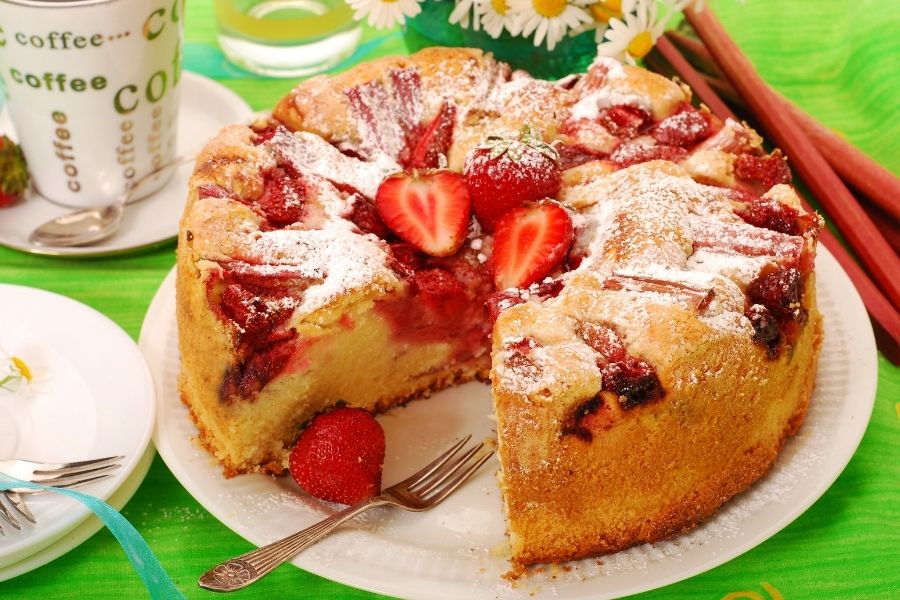 However, there are also lots of sauces you can make with rhubarb, such as a rhubarb hollandaise. You can make delicious relishes, and you can even make tasty cocktails (and mocktails) with rhubarb.

Rhubarb is really such a versatile and delicious vegetable when you know what to do with it, and now you can add one more rhubarb treat to your collection: raw rhubarb with dip, as a compote, or a little added spark to your salad! Of course, just to mention it one last time, whether you are cooking it or eating it raw, make sure that you only ever eat the stalks and throw away all of the leaves.