You are in the vicinity of the produce market stalls and you come across the leafy red stalks of vegetables of Swiss chard and rhubarb. You seldom or never used these in your kitchen adventures. Swiss chard vs rhubarb? It’s not a boxing match, but how do you use any of these ?

They are both leafy vegetables, with Swiss chard being used more as a vegetable. It is related to the beet family and it can be used raw in salads, stir fries, omelets and soups. The raw leaves are palatable as tortilla wraps. 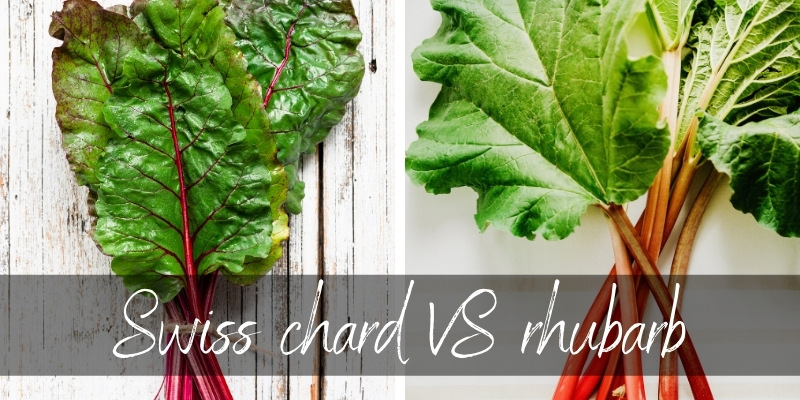 The main differences between Swiss chard and rhubarb is the way both are used, and how they are classed. Rhubarb is a fruit, and is used in sweets and desserts. Its leaves are poisonous, so only the stalks are edible.

Swiss chard is a vegetable, closely related to beets. Both the stalks and the leaves are edible, and they’re usually found in savory dishes.

That being said, rhubarb and Swiss chard look very similar. So much, you might think they’re the same. A great tip to differentiate them is to look at the leaves.

Swiss chard leaves are shinier, a bit more ruffled-looking, and not as wide as rhubarb. They have more of an oval shape and the color of the stalk goes all the way into the veins of the leaves (red or white).

Rhubarb leaves are wider towards the base, kind of like a triangle. Their veins are almost always white, despite the stalk being red.

Now here’s how to pick which to use, according to what kind of dish you’re making and how much of the plant you can use.

Swiss chard for the leaves and stalks

Swiss chard is usually compared to spinach because of its green and earthy flavor. Both leaves and stalks of the Swiss chard are edible and are typically boiled or sautéed. Its bitterness is diminished when it is cooked. 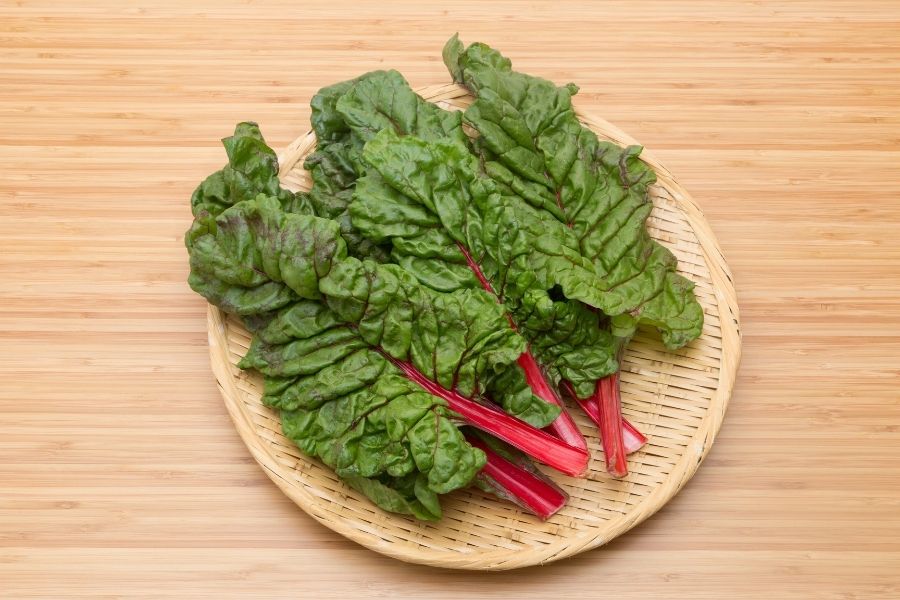 Rhubarb for the stalks alone

Rhubarb, on the other hand, is a fruit and you may only use the stalks. Its leaves are never used, because they contain significant amounts of oxalic acid, which could prove fatal.

We say that rhubarb is used as a fruity component because of its tartness and acidity. It’s perfect when combined with a sweet fruit such as strawberry, in a pie.

Chards are biennials, rhubarbs are perennials

In its 2 year cycle, Swiss chard is sown between June and October in the Northern Hemisphere. Chard is harvested when the leaves are young and tender or after maturity, when they have become larger and have tougher stems. Most chards produce 2 to 3 crops a year.

Rhubarb, in its 3 year cycle, is grown widely, and with greenhouse production, is available throughout the year. One type of rhubarb is grown in hothouses or heated greenhouses and is called hothouse rhubarb. It is available in consumer markets during early spring, before the outdoor grown rhubarb is available.

Hothouse rhubarb is brighter red, more tender and sweeter tasting than outdoor rhubarb. They are harvested in temperate climates in April or May (which is mid to late spring in the Northern Hemisphere) and October to November in the Southern Hemisphere.

Why do we compare Swiss chard with rhubarb? Because there are different varieties of Swiss chard that are mistaken as rhubarb. Their red stalks and leaves are similar.

This proves can be a problem from two perspectives. First, you buy ruby chard, expecting it to be rhubarb. You put it in a sweet pie and it comes out… not sweet, nor tart. Just confusing.

Second, and this is worse, you buy rhubarb because you thought it’s ruby or rainbow chard. You know chard leaves are edible, and you unknowingly poison the entire dish with rhubarb leaves.

So be very, very careful what you pick up from the grocery store. Heck, if you’re not sure it’s best to only use the stalks, it’s safer that way.

Let’s discuss how to eat Swiss Chards and Rhubarbs. Swiss chard have been eaten for centuries while rhubarb is a fairly recent discovery as an edible food source.

Swiss chard have highly edible leaves. It has been used in cuisines for centuries because it shares similarities with beets, spinach and cardoons. Throughout the centuries, Swiss chard has been called many names such as silverbeet, beet spinach or leaf beet.

Swiss chard doesn’t get as much attention as the kale, spinach, and beet, but several Swiss chard recipes prove that it is just as versatile.

The rhubarb is grown primarily because of its fleshy leafstalks, known scientifically as petioles. The rhubarb’s use as food is a fairly recent innovation. Its first usage is recorded in 18th or 19th century England when affordable sugar became widely available.

Rhubarb is commonly stewed with sugar or in pies and desserts. You can also find it pickled, or in very savory dishes, or dehydrated and infused with fruit juice. In America, it is mixed with strawberry juice to imitate the famous strawberry rhubarb pie. 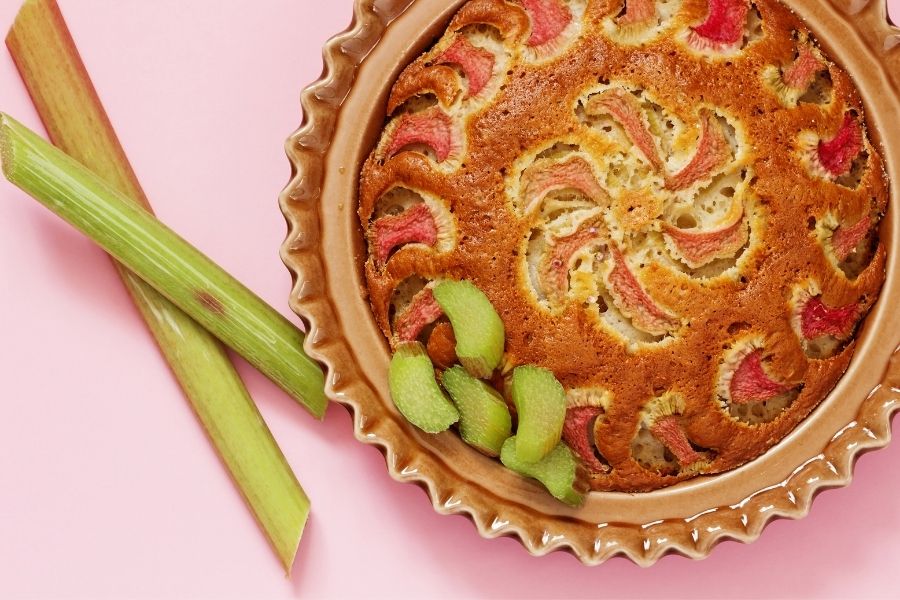 Celebrate any occasion or meal with the stalks of this bright rhubarb vegetable that will sweeten up your cakes, crumbles and after meal blues.

Swiss chard vs rhubarb – we can’t really say who won. As a matter of fact, they complement each other. Don’t let anyone of them step on the stems of their God-given talents. The Swiss chard best best for main courses, while the rhubarb is great for sweets and desserts.