One of the most commonly asked questions when it comes to bread is: does it contain eggs? So, if you had this question bouncing around your culinary brain, you are certainly not alone! 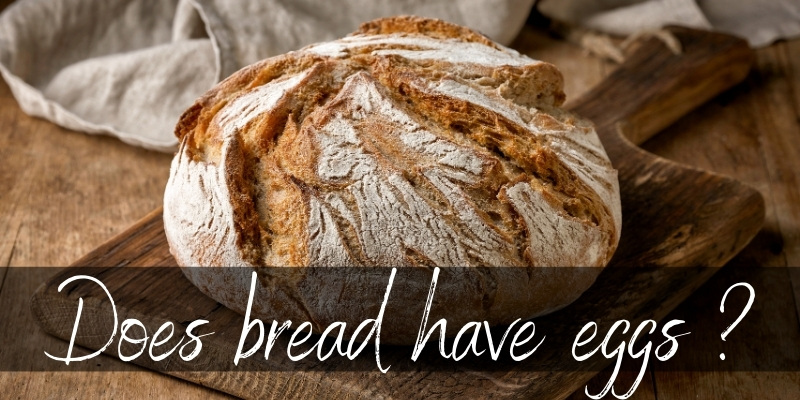 Is there egg in bread ?

Traditionally, no, most bread does not contain eggs, milk, or any other animal products. However, there is certain bread that does contain eggs, and we’re not talking about those beloved egg and cheese croissants you get at the corner bakery!

You may find some bread that does not contain eggs, but has an egg wash on the top to give them a shiny, golden color.

Bread rises due to the yeast content, and gluten provides a chewy consistency. So, why is it that some bread has eggs and some don’t? For this we have to look at bread’s backstory, to really understand it.

For the most part, bread is not made with eggs. The bread was one of the first nutrient-rich, filling foods to be enjoyed by humans! It came about during ancient times, rising in the ranks in the civilization of the Fertile Crescent, bread pun sort of intended there!

The Fertile Crescent is in fact named because of its crescent-like shape! It spanned from North Africa from the Nile River, and reached into the Arabian Peninsula through the Euphrates and Tigris rivers.

However, despite bread’s linkage to the Fertile Crescent civilization, remnants of bread and bread-making tools have been found by archaeologists all over the world, including rice-based bread discovered in parts of Asia!

Why bread is not traditionally made with eggs

Well, in ancient times, people needed food that would satiate their hunger while also using minimal resources. Hence, unleavened (or non-rising) bread came to be! These people had absolutely no reason to add eggs to their bread; it would simply be a waste of resources, and eggs weren’t commonplace.

If you’re wondering if that means early civilizations didn’t even use yeast, wonder no more! They didn’t use any rising agent! Their bread was very different. They were flatbreads, more like modern pitas and tortilla wraps.

Yes, eggs are used in baked goods today to help dough and batter rise. But in bread, we tend to use yeast nowadays since it is much better at giving bread that nice fluffy, light as air rise.

What kinds of breads do not contain eggs?

Most of the bread you will find at your local grocery store will not contain eggs. This is because eggs tend to make bread dough heavier, richer, and denser. So, why would bakers use eggs when they could just use yeast? There is really no need for it in a commercial sense.

For the most part, bread is made with just flour, water, salt, and yeast. When the bacteria in your standard cooking yeast begins to activate, it puffs up the dough so much that the resultant risen dough can make more than one loaf. Yeast allows you to make the most out of your ingredients, raising your bread without killing your wallet.

So, what kinds of bread do not contain eggs? Pretty much, all of your favorites! Here are just a couple of them we know you love just as much as we do!

White bread is a sweet, comforting, and easy-to-make bread that we all know and love! Despite it sitting on every bread shelf in every grocery store all over the world, white bread did not originate in a factory.

In fact, white bread can be traced all the way back to ancient Egypt! White bread displays that pure, crisp white color because of how it is made. To get that color, you must remove the oil-containing germ and bran from the wheat.

In ancient Egypt, this was a very difficult process to do by hand, so, white bread was only made on very special occasions hosted by the upper class and royalty.

Interestingly enough, white bread’s lack of these oils and its lack of eggs allows it to last a great deal longer on the shelf and in your home. That’s just one of the many reasons we as a society love white bread as much as we do!

Similar to white bread and the French baguette, Italian bread does not contain any eggs! However, if you’ve ever snapped a loaf of this beautiful, fragrant bread in half, or taken a glorious bite of one, you will have certainly noticed how different it really is! 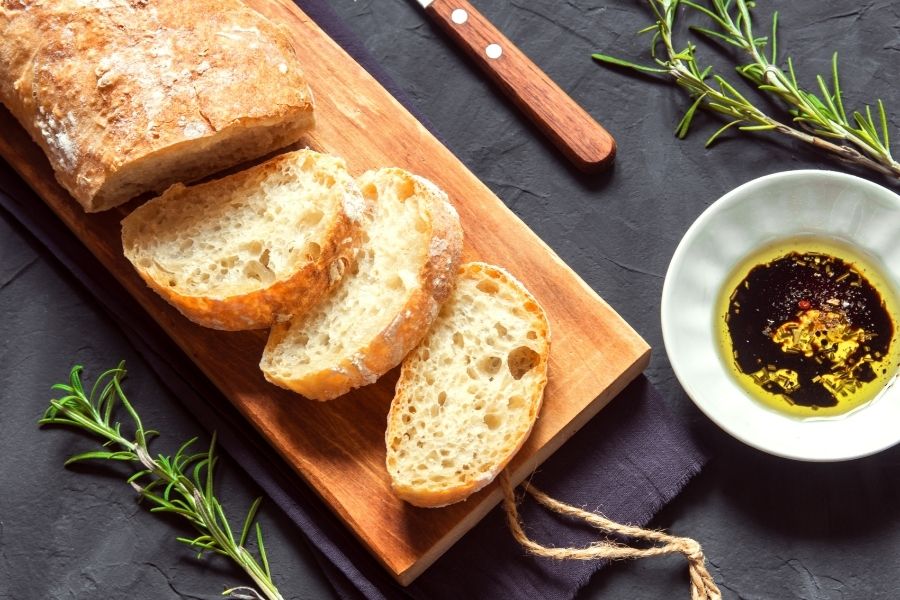 In addition to flour, water, salt, and yeast, Italian bread actually contains some milk, olive oil, and even sugar, at times! So that’s why it has such a unique, unbeatable (haha, egg pun!) flavor!

What kinds of bread contain eggs?

As we now know, eggs help provide a rich, fluffy texture to the bread, along with helping them rise instead of or in addition to yeast. But, you may be interested to know that eggs are also used in bread to give them a nice warm, golden color.

That’s why the following egg-containing bread is certainly more yellow than your traditional yeast-only bread!

Challah bread is a traditional Jewish bread. It is normally eaten only for holidays and special occasions, hence its beautiful, braided design.

Though not all challah is made with eggs, most is due to the Hebrew tradition. Plus, the added egg makes this bread a whole lot fluffier, heartier, and more golden! In fact, due to its egg content, challah bread almost tastes like a mildly sweet cake!

Similar to challah, brioche is the French twist on egg bread. In fact, its egg content makes brioche more similar to a pastry than to a bread!

Its light, fluffy, decadent texture is only enhanced by all the butter that goes into it. Therefore, brioche is oftentimes used not only to hold egg and bacon, but also, to make French toast that is to die for!

Plus, brioche was loved by many of France’s greatest historical figures, including King Louis XIV and the enlightenment thinker Jean Jacques Rousseau!

Although whether or not eggs are used in naan bread is up in the air, we decided to put it under egg-containing bread. Why? Because using eggs in naan has become increasingly popular recently! 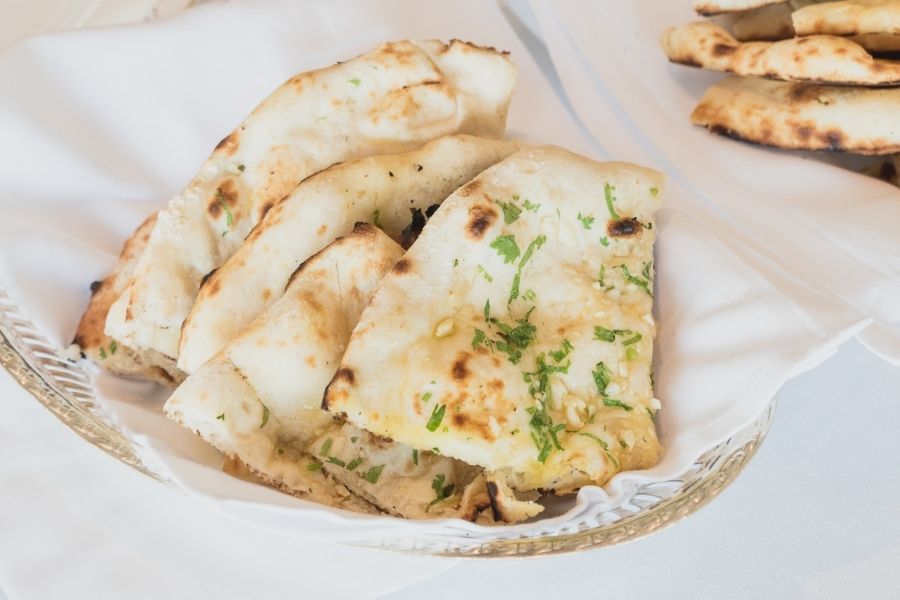 Eggs help give naan a richer, softer texture, as does yogurt, which is also used to make naan sometimes. That’s why you may see naan paired with both savory and sweet dishes!

Okay, this one was more for fun! Easter bread is that sweet, rich bread served around the Easter season. It is traditionally eaten in Italy, but its popularity has grown recently and is enjoyed by many!

Easter Bread does not technically need to contain eggs within its dough, although it absolutely could. Sometimes, Easter bread is simply challah or brioche, but it can also just be a yeast bread.

However, Easter Bread must contain whole eggs (shells and all) within it! How is that possible? You simply dye your hard boiled eggs with your favorite food colorings, press them into your bread dough, and bake! Out of the oven will come a beautiful ring of colorful bread, similar in look to a bird’s nest!

If you want to eat a bread that doesn’t contain any egg, it would be better if you ask the person you buy from if it has any, or if you are in a supermarket you can simply check the label.

I hope this article helped you know what to do when buying or making bread if you want to avoid eating eggs.