Mascarpone and cream cheese are two soft cheeses you can easily find in the dairy aisle. They’re commonly used in desserts, though you may also find them in some savory dishes as well. In fact, they’re so common they are easily confused for one another, at least in terms of appearance. 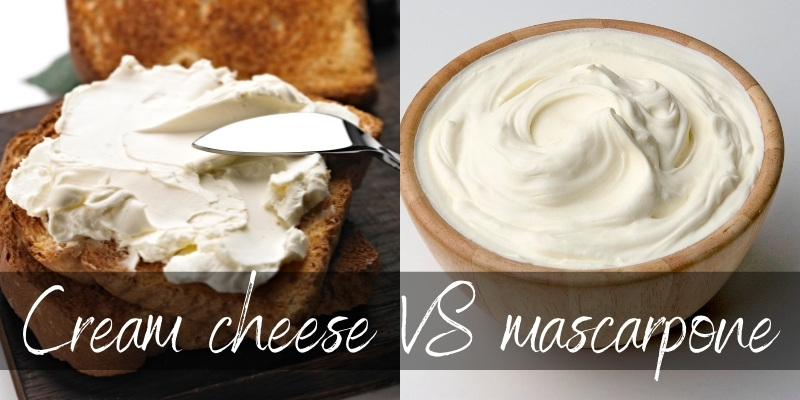 Mascarpone cheese is higher in milkfat than cream cheese, and lower in moisture content. This results in a denser, creamier texture than cream cheese. There’s a significant difference in flavor as well, with mascarpone being on the milky sweet side, while cream cheese is rather tangy with a hint of salt.

Both may be used for cheesecake, though the original version uses cream cheese. And both cheeses work great as a base for fillings, creams, frostings, and anything you can imagine. Now let’s take a closer look at what each of these cheeses is.

Mascarpone is an Italian soft cheese, made entirely out of cream, and nothing else. The cream is left to sit and curd, or in some cases tartaric acid (leftover from wine barrels) may be used to help the process.

The result is a fat, creamy soft cheese with very little whey left in it. As mascarpone is made from cream, it is higher in fat and also requires an extra processing step. This makes is more expensive than cream cheese, at least double if not triple the price.

Read also: Why Is Cheese So High In Calories ?

Since mascarpone has so much milkfat (at least 55%) it can easily separate if you overmix it, or leave it in a warm room for too long. when working with mascarpone, remember to have everything chilled and work fast.

What is cream cheese ?

Cream cheese is an entirely American product, the result of an attempt to reproduce a Neufchatel cheese. The producer tried adding some cream into the cheese mix, and instead ended up with cream chees, rather than Neufchatel.

To be clear, cream cheese is made from a combination of whole milk and cream, with more whey (or moisture) present in the final product than mascarpone.

This is the cheese of choice for cheesecake, morning bagels, salmon spreads, anything you can think of. Now let’s take a closer look at a comparison between mascarpone and cream cheese, just to make sure we’ve got everything right. 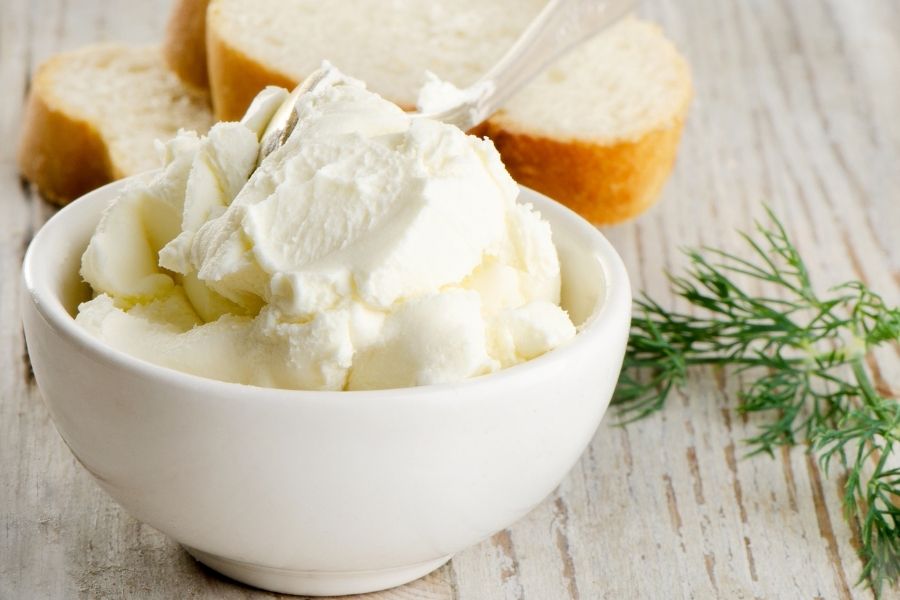 1. Mascarpone has a higher fat percentage

Mascarpone has a high fat percentage, over 55%, simply because it’s made entirely out of cream. And not just any cream, this is a cream that has bee thoroughly separate from the milk. Some call this cream double cream or heavy cream, with a fat percentage way over the common 10%.

Because of this high milkfat content, mascarpone has a subtly sweet, milky flavor. This becomes even more apparent when you mix it with something that requires a bit of fat for the flavor to come to light, like cocoa or coconut.

Conversely, cream cheese has a lower fat percentage (around 33%) because it’s made form a combination of milk and cream. It has a slightly higher moisture content, and this shows in how easily it can spread in a piece of toast. By comparison, fridge-cold mascarpone is very dense and difficult to spread, almost like butter.

An important distinction between mascarpone and cream cheese is the flavor. Because mascarpone is usually made with tartaric acid, or sometimes citric acid, it has a subtle, mild taste. Some would say it has no taste at all, instead being a great way top introduce other flavors.

Cream cheese is made with lactic acid, the acid that naturally forms as the bacteria in milk eat up the lactose. So, the result is a mildly tangy taste, reminding people of cheese (in a good way). There is also a hint of salt added to cream cheese, noticeably more than in mascarpone.

The result is a cream cheese that is tangy, very slightly salty, and it works amazingly well with sweet dishes or even with toast and jam.

Can you substitute cream cheese for mascarpone ?

Yes, you can sue cream cheese in place of mascarpone, or the other way around. You will need to account for the lower fat content of cream cheese, by adding some softened butter. Despite cream cheese being slightly salty, it will not ruin the flavor of your dessert. In fact, it may being more dimension to the dish.

Conversely, using mascarpone instead of cream cheese will result in a very heavy and rich dessert, and you may need to add a bit of salt. There is no tangy note here, so you will have to add something to cut through all that richness. Or, you can leave it as-is and have the most decadent dessert possible. Yum !

In short, mascarpone and cream cheese are very similar, and they may be used in pretty much the same way. You just need to account for the slight difference in flavor. In our opinion cream cheese goes much better with fruity flavors, while mascarpone goes better with richer flavors like chocolate or caramel.