Have you heard of people putting ice in their milk ? As weird as it may sound to some people, it might be the best thing ever for others.

There’s this urban legend that people started putting ice cubes in milk back in the 30s, when fridges weren’t the most common and milk had to be drunk the same day it was delivered.

We’re not really buying that one, but hey you never know ! Still, is putting ice in milk even a good idea ? Is it a bad idea ? Let’s debate the pros and cons, maybe we’ll come up with an answer. 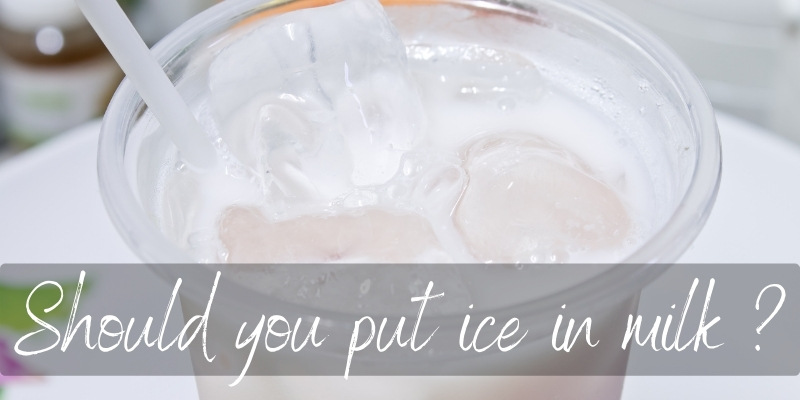 Table Of Content show
1 Milk with ice cubes
1.1 Pros
1.2 Cons
1.3 So is it bad or not ?
2 Ways to keep your glass of milk cold
2.1 Use an insulated, double walled glass
2.2 Keep heavy glass mugs in the fridge
2.3 Drink smaller servings, faster
3 Never freeze milk, it will curdle
4 Conclusion

Milk with ice cubes seems to be a very personal choice. While some people say it helps keep the milk cold, some say it waters it down too much. In a way both groups are right, but we all have to pick a side eventually.

So let’s see the pros and cons of each side, and pick our own.

Adding some ice cubes to a glass of milk will keep its temperature very low. The milk is cold, the ice is cold, and cold milk just tastes great for so many people.

The ice won’t have time to melt because you’re drinking the milk faster than that.

Some say it goes great with a warm cooking, because of the contract in temperature.

When you add ice cubes to a glass of milk you water it down. As the ice melts (and it will melt), the extra water will water down the milk.

Aside form this, some things just seem ‘wrong’. Like steak with ketchup or petting a cat backwards, milk with ice just seems wrong.

Read also: Why Is Milk Sweet ?

Personally we think adding ice to milk is a bad idea, because it will eventually water down the milk. Aside from that, there are many other things you can do to keep your milk cold, aside from adding ice.

Now, if your opinion is that ice in milk is the best thing ever, you’re going to disagree with us and that’s okay. Even so, we’d like to present a few alternatives to using actual ice.

Ways to keep your glass of milk cold

There’s a few things you can do to keep your glass of milk perfectly cold. Granted, they may not be as satisfying as hearing ice cubes smack against the glass.

But they’re perfectly viable and practical ways to keep anything cool, really.

Use an insulated, double walled glass

One of the first things you can do is get yourself at least one double walled, insulated glass. It doesn’t have to be a travel mug, it can be just one of those nice looking glasses that seem extra thick.

That being said, if you want to use a travel mug because it fits more milk then you do you.

The whole point of a double walled, insulated anything is keeping the outside temperature away from the inside one. The ‘air’ between the double walls is actually a vacuum, and it won’t transfer heat.

The only way your milk will warm is through the top part that’s exposed to the air.

A heavy glass mug may be easier to get a hold of, since you might already own one. It doesn’t look like something you’d drink milk out of, but it’s definitely going to keep the milk cold.

A thick wall of glass will keep cold for longer than a thin one. If you know you’re in love with milk, drink it often and in large amounts, and absolutely need it cool, using a thick mugs might be a better idea than ice.

You can even keep the mugs in the freezer if you want to have the coldest milk possible.

Another idea would be to just drink smaller servings of milk, but faster. Even if it means refills, getting fresh milk each time may just be worth the effort.

And seeing as they’re smaller servings, they won’t have time to warm up enough.

Never freeze milk, it will curdle

You might be wondering if it wouldn’t just be easier to freeze some milk into an ice tray and use those as ice cubes. Well, in a way you could. The milk would freeze and when it thawed in the fresh milk there’d be no water. 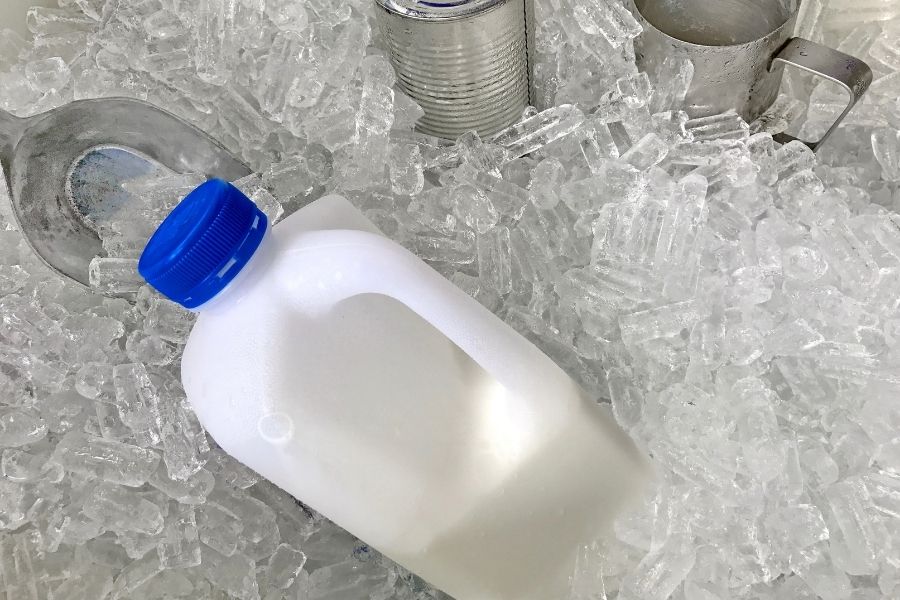 But there’s a big problem. Milk curdles when frozen and thawed. You see, milk is mostly water, then protein and fats and a wee bit of salt. When you freeze milk you form ice crystals out of all the water.

The fat and protein separate into grains, and when you that the whole thing you’ll get whey and grains of protein and fat.

You’ll read here and there that milk can be frozen, thawed, and hen used. But that’s never for drinking, it’s for cooking or making cheese where you’re messing with the milk’s texture anyway.

You can put ice in milk, it doesn’t spoil the milk or something like that but it can make it underwhelming because it will water it down too much. If you really like drinking milk that much and you need it to be cold, go ahead, put ice cubes in milk, no one will judge you, or will they? You will not know anyway.

But as we said before, put ice in milk only if this is the last option to cool down the milk.