Nachos are delicious, and most of us have had it at some point. Maybe even several times ! They’re a delicious mix between triangle corn chips, melted cheese, jalapenos, any choice of meat, tomatoes, coriander, sour cream, and anything else you can imagine. But once you stop to think about this delicious dish (snack ?) you can get a bit confused.

What’s the difference between nachos and tortilla chips ? Are tortilla chips the nachos ? Why are round corn chips called nachos ? Aren’t all of these called Doritos ? This is all especially confusing and frustrating if you’ve never has nachos before, and want to assemble your own but don’t know exactly what to buy. So let us help clear things up. 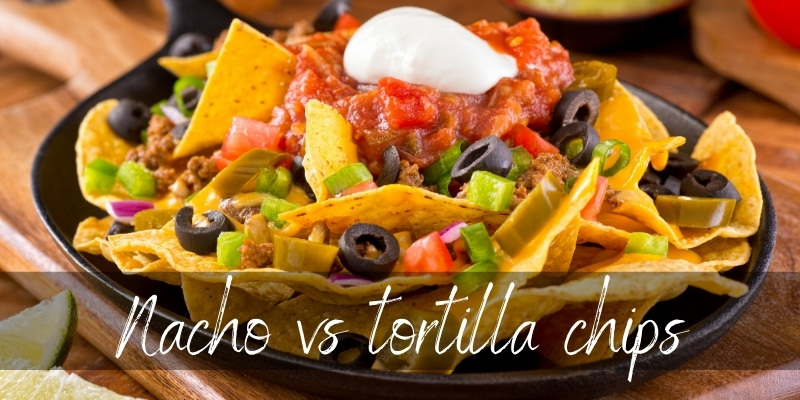 Tortilla chips are the triangle chips and half of the nacho dish. The other half is the various toppings and sauces used, and together they make they dish called nachos.

But people tend to use the words interchangeably, saying ‘nachos’ when they mean ‘tortillas’. A tortilla chip is not a nacho, but if you put some cheese sauce on it, it becomes a nacho.

Why are tortilla chips triangles ?

You may be wondering why the tortillas are triangles, of all things. The very beginning of the triangle corn chip is humble, indeed. Tortilla chips are called this way because they are actually a big, round tortilla cut into triangles.

This all started back in the 1940s when Rebecca Webb Caranza had a tortilla-making machine that would sometimes make misshapen tortillas. Instead of throwing them out, she decided to cut them into triangles, fry them up, and sell them as-is. They were a hit, and thus the nacho dish was born.

Nachos were actually invented at about the same time as the tortilla chips, but Ignacio ‘Nacho’ Anaya. He first served this appetizer at a far he worked at, with just some melted cheese and pickled jalapenos. It was very well received, and spread throughout America.

Outside of America, tortilla chips are simply called nachos, and are always served with some sort of dip. Sometimes you can find them by their brand name, the most common being Doritos.

What about round nacho chips ?

There are round tortilla chips, simply because someone thought to make a chip that could hold more sauce and topping. The round edges help hold everything onto the chip.

Are they the real, original tortilla chip ? No. But are they equally delicious ? Yes. In the end it’s the toppings that make the nacho what it is, regardless of the shape and quality of the tortilla chip.

Why are tortilla chips different colors ?

The original difference in color for tortilla chips came from the type of corn they were made from. The most commonly used corn is yellow, so the tortilla chips are yellow. But there are blue, red, and purple corn varieties and they produced differently colored tortilla chips.

Nowadays the purple and red ones are artificially colored, but they’re simulating the original colors from the different varieties (albeit brighter than normal). 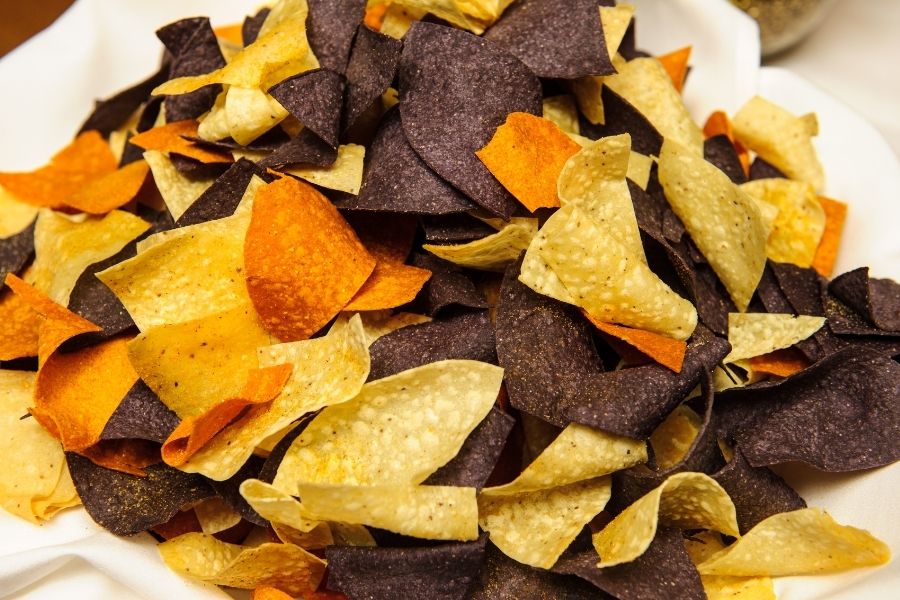 You may have noticed an important detail earlier. Tortilla chips are made from tortillas, the flat, round cornbreads that have no leavening agent added. They an be shaped and cooked in many ways.

A flat tortilla, fried, and used topped with meat, cheese, beans, and a few veggies is a tostata. A tortilla wrapped around the ingredients is a burrito. A tortilla baked or fried into a U shape is a hard shell taco, though you can make is soft as well.

In short, tortilla is actually just a way to bring a lot of toppings and sauces to your mouth, in any way you see fit. In this case it’s not hard to see how triangle chips were derived from tortillas.

Tips on assembling the perfect nachos

So, now you know what nachos are. You need some good, sturdy tortillas, and you need some great ingredients. A bit of creativity will always help, but in truth it’s your stomach calling the shots when it comes to nachos.  If you’re assembling nachos for the first time ever, make sure you have at least cheese (melted or a dip) and jalapenos available. These will provide you with the bare-bones nachos, but it’s the first-ever version and very easy to understand in terms of flavor.

Any nacho is a good nacho, just like pizza. But there are ways to make sure you always get a really good nacho plate. Let’s take a look at the best tips on how to assemble the perfect nachos.

Never buy pre-shredded cheese, even if it’s more convenient. It’s coated with an anti-caking agent that will prevent it from melting. Even if it takes more effort, grate your own cheese and melt it yourself, it’s worth it.

Have an array of sauces available. Small portions, and don’t crowd all of them onto the plate. Have something like sour cream, guacamole, cheese dip, and salsa at your disposal. Use the melted cheese as a way to hold everything together.

Bring some veggies into the mix. Even if they don’t sound like they belong, you need something ‘wet’ and fresh to counter all that goodness. Veggies like zucchini, cucumber, tomatoes, olives, lettuce, arugula, onions, spring onions all go very, very well with nachos.

If you want to get extra fancy and creative, arrange a baking sheet nacho. Preheat your oven to 400 F/204 C, coat a baking sheet with cooking oil (not olive!), arrange a layer of tortilla chips, grated cheese, beans or meat, another layer of tortillas, more cheese and meat, and another final layer of just tortillas and cheese. Pop it in the oven until the cheese has melted and the tortillas are crispy and hot.

When adding veggies, add them last. They will seep a lot of moisture and eventually get the tortillas soggy. Even better, you can use little ramekins of bowls to keep the veggies and each person can get their own.

And that’s pretty much it. You can now assemble your very own nachos, with any kind of tortilla chips you like, whether they’re triangles or they’re round or they’re a bit different. As long as you’ve got something corn-based and crispy, you’re good to go.