It’s pretty safe to say peanut butter is everyone’s best friend and one of the two most important ingredients in a sandwich, the other being jelly.

Because of this we tend to have peanut butter just laying around the kitchen, and sometimes we may have a jar or two extra. Those jars may be tucked somewhere in the back of a cupboard and only discovered when rooting for a snack.

And when we do find said jar of creamy (or crunchy) PB, we’ll wonder if it’s still good. Most likely, it still it.

Peanut butter has a pretty long shelf life, if kept properly. So let’s see if peanut butter can go bad, and explore how to tell when it’s time to throw it out. 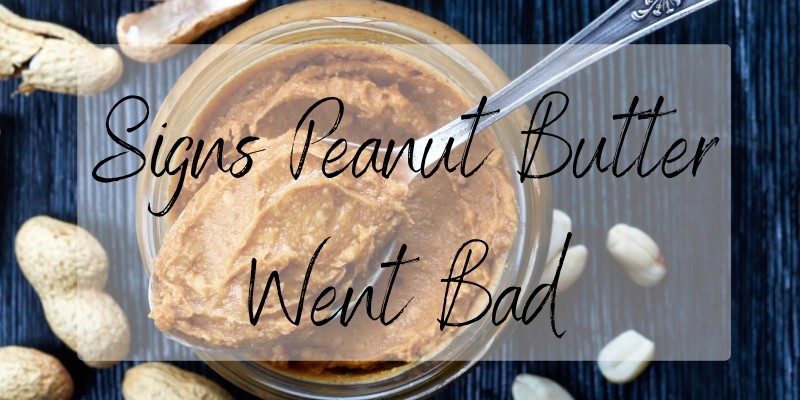 Yes, peanut butter can go bad but it takes a very long time to do so. By going bad we mean to the point where it would cause harm if eaten.

Peanut butter is made of pretty much just peanuts, which are mostly fats, protein and some fiber and a bit of carbs. It’s the high fat content that makes it last a long, long time.

That and the naturally low moisture level – somewhere under 2%. And yes, peanut butter does feel moist but it’s actually the peanut oil, not water,

If you were to press all the oil out of peanut butter you’d be left with a crumbly, dry mass of crushed peanuts.

There are two versions of peanut butter, and they differ in terms of how long they last, and even in flavor.

Processed peanut butter is what you’ll find on the shelves, like Jif or Skippy. They’re on the market to provide stable peanut butters that won’t separate over time and have a bunch of stabilizers and thickeners.

Over time they’ve evolved to offer flavored versions, or versions that are streaked with jam or honey or chocolate.

Natural peanut butter is a pretty vague term at first, but in reality it’s just the most basic version of PB: peanuts, and maybe some salt. This kind of peanut butter is runny and will separate over time. Simply stir it back in and you’re good.

Between the two, processed peanut butter stays edible and keeps its flavor for much longer due to stabilizers. Natural peanut butter has only a few months to live.

How long does peanut butter last ?

Whichever kind of peanut butter you get – processed or natural – they will both be influenced by oxidation. That’s just the level of air exposure they have.

The more you open the jar, the more air gets in. So this is an important factor we’ll be keeping our eyes on. 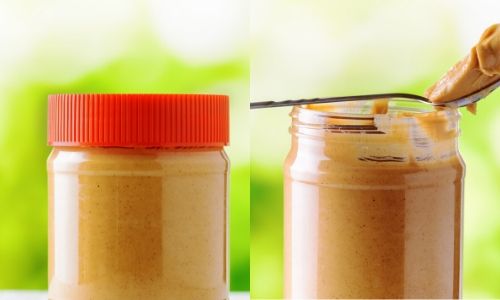 Unopened peanut butter will keep as long as the ‘best by’ or ‘eat by’ date says. This may differ from brand to brand but in general, processed peanut butters keep for several years if unopened and kept at room temp.

Natural peanut butter that’s never been opened may keep up to one year, but it will separate. Again, no issue, simply stir the peanut oil back in and you’re good.

On the other hand opened peanut butter will last much less. This is where processed peanut butter really shines, in that the stabilizers will really help it last longer.

You can keep a jar of processed peanut butter and eat from it every now and then for almost a year without it turning bad. Assuming the utensils you use are clean or have no bacteria on them like leftover butter, haven’t been licked and dunked back int the PB.

A jar of natural peanut butter that’s been opened and eaten from every now and then will not last longer than 3-4 months. It may last a little longer than that, if you keep it at a lower temperature but not in the fridge.

This is mostly due to the lack of stabilizers and thickeners that processed peanut butters have.

On one hand, natural PB is just peanuts, the most peanut-y flavor you’ll find.

On the other hand, natural peanut butter may be too short lived for some folks.

How to tell if the peanut butter is spoiled

You’re going to have to look at and smell the peanut butter to notice there’s anything off about it. Some jars may look bad even if they’re not, and some may look okay but be rancid.

It really depends a lot on the type of PB you have, and how long it’s been opened for. Let’s take a look at the main factors.

First, you should check how the peanut butter jar looks. Did its color change, did it darken significantly or change color in any way ?

And did any of the oils separate ? If it’s a natural peanut butter that’s not a bad sign since this can easily happen. But if it’s a processed peanut butter, it’s not meant to separate at all.

If it did separate you can be sure it’s not going to last for much longer.

Second, you may open the jar and give it a little sniff. What does it smell like ?

You should detect peanuts, and whatever flavorings were added (if any). 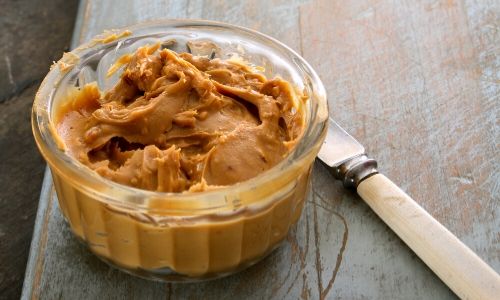 If it smells burnt or charred, it might be a bad sign. Some peanut butters may have that smell by default, but most develop it when they start to go bad.

It you detect any pungent odors it’s time to toss it because it’s definitely bad.

Third, look at the texture. It it’s starting to develop ares where it’s significantly dry compared to others, then it might be going bad as well.

Keep in mind that mixed peanut butter – the kind that has dashes of chocolate or honey or jam – may prove harder to detect any bad odors or weird change in texture.

And finally, you should take a look at the ‘best by’ date, or any other date that states you should only keep the jar open for a certain amount of time.

If it’s still within that date it might still be alright, but think about the temperature you’ve kept it at. Room temp peanut butter will last as long as the label says.

But if your room is fairly warm  – over 20–22 C/68–72 F – and the peanut butter’s always been kept at a warmer temperature it might turn rancid fast.

We should take a moment to talk about rancid peanut butter, and what it really means.

Since peanut butter has a very high fat content – both processed and natural versions – it’s not going to have lots of room for moisture/water.

This means that when peanut butter goes bad, it won’t develop mold or much of a bacteria culture since there’s barely any moisture to sustain them.

But the oils and fats can and do get rancid. This is how peanut butter goes bad, and folks have mixed opinions on this.

You see when fats turn rancid their chemical composition changes and they give off a bad odor. They’d also taste pretty bad, a bit sour but also as if you’d dropped a bit of detergent in.

Now, some may say that rancid fats aren’t going to harm you. We have never personally tried rancid peanut butter, and we wouldn’t recommend it to anyone.

There have been some brave souls to tried it and claimed it wasn’t so bad. Some folks may have very underdeveloped taste buds and not even notice the rancid smell or flavor and may eat it without knowing.

In any case, while is no definitive proof that rancid peanut butter is bad for you, we strongly recommend you throw it out. Even if it’s the last PB jar in the house.

There are a couple of options you have when it comes to storing peanut butter. One option may be better for you than the other, or maybe not.

It really depends on your personal style and how much peanut butter you eat, as well as what kind you have.

Objectively you should keep peanut butter at lower temperatures – not too low though – to stave off fat oxidation and keep it fresh for longer.

In reality things are often very different, and we should really talk about that. 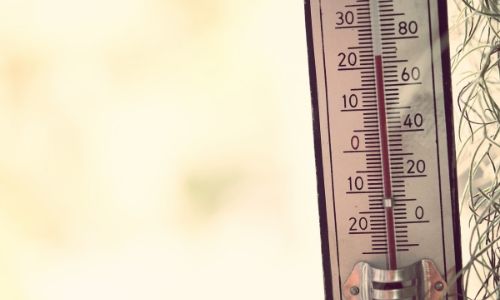 Most folks store their peanut butter at room temperature. That means that it’s usually in a cupboard in the kitchen, or maybe in a walk-in pantry or on a shelf somewhere.

It’s definitely not kept somewhere cold, that’s for sure.

Now, you may look at the back of the peanut butter jar and some may have storage indications, some may not ans you should really follow those.

The upside to keeping PB at room temp is that it’s definitely going to be spreadable. And that’s really important, given how folks usually use peanut butter.

It’s more of a spur of the moment thing than a planned meal, like you just root for a snack and find some PB along with other items like an apple or jam or pretzels.

And you can’t really wait around for cold PB to soften if you spontaneously decide to have a snack.

If your household goes though peanut butter quickly them this is the best storage option since it won’t have time to spoil. And if it’s processed peanut butter (usually thicker) it’s definitely going to be spreadable at room temp.

A cold pantry will keep it fresh for longer

On the other hand, you may store peanut butter at a colder temperature, though not as cold as a fridge. So maybe somewhere around 10 C/50 F would be alright.

This way it may be somewhat spreadable – though you may have to give it a minute – and still keep fresh for longer.

If you were to stick it directly into the fridge it might get too hard and you’d have to wait around for it like you would for a stick of butter.

This method would probably be best for folks who don’t eat a lot of PB and want to keep it fresh past its expiration date, since that’s totally possible with a fridge.

An upside to this is that natural peanut butter may not even solidify so much in the fridge or a pantry, since it has no thickeners or stabilizers – like palm oil. It may also keep much longer than its expiration date too, as long at it’s tightly closed.

So how should you store your peanut butter in the end ? Store it according to how fats you go through it and whether it’s natural or processed.

What you need to remember is that warm rooms and natural PB do not mix, at least don’t expect it to last for very long.

Alright, so that’s all about peanut butter and how quickly or slowly it can turn bad. We sincerely hope you won’t try rancid peanut butter since there’s really not scenario where that’s a valid move. Unless it’s the Apocalypse, and then you’ve got bigger things to worry about.

Hopefully you got a good idea on how to store peanut butter and you’ll enjoy it to the fullest.