Carrots are in everyone’s kitchen and part of pretty much ever food possible, along with onions, tomatoes, potatoes and fragrant herbs.

And if you’ve ever handled a carrot you may have wondered why carrots are always so consistently orange, at all times, in all their forms. That’s a lot of pigment.

You may have also noticed some strains of purple or yellow carrots and mistook them for something else in the grocery store.

Well, this is what we’re going to cover in this article. W’re going to find out why carrots are orange, why they’re still orange to this day, and if the other ones (i.e. purple) are weird. 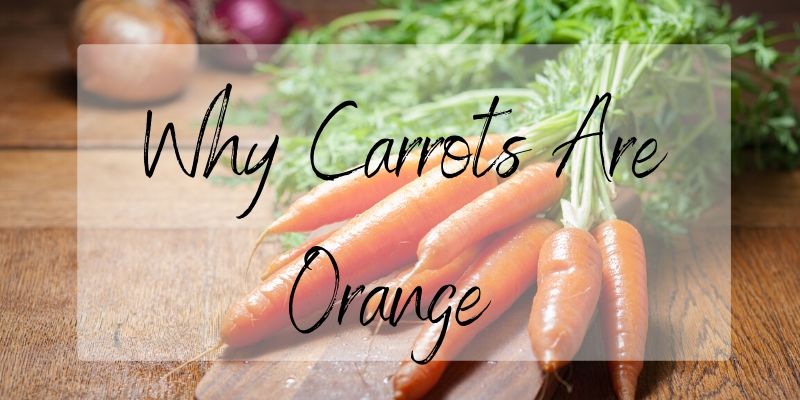 Table Of Content show
1 Why are carrots orange ?
2 Carrots can be different colors
3 There are two main types of carrot
4 Orange carrots became popular in the 15th century
4.1 Some say William of Orange is to blame

Why are carrots orange ?

Carrots are naturally orange due to the pigment beta-carotene. This is what makes anything orange, including oranges, peaches and even mangoes (to some degree).

The whole carotene family was named after carrots, suggesting carrots have been orange for a very long time and this was a fact of life.

But carrots are not constricted to just one color. True, you’ll find carrots to be orange pretty much everywhere you look nowadays but this wasn’t always the case.

Carrots can be different colors

Various antioxidants give carrots their different colors. It’s actually a combination between antioxidants and pigments and each carrot color is a mutation that happened hundreds of thousands of years ago.

The birthplace of the carrot is believed to be in the region occupied by modern Iran, Afghanistan, and some include Turkey as well.

But, the original carrot wasn’t orange. It was actually white and through selective breeding several color mutations became available.

There are two main types of carrot

The Western carrot is white, yellow, or orange. Its original version is the white, but it’s the yellow carrot that was most used and bred to get the crops we have today.

The Eastern carrots were purple, red and (nearly) black. They are the ancestors of the red and purple carrots we have today. 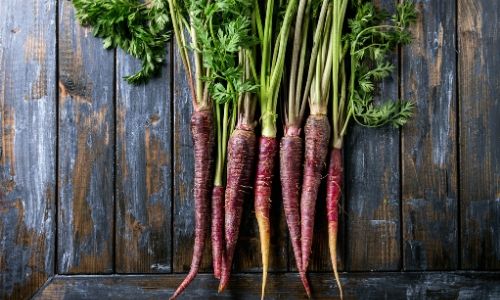 Due to carrots becoming a widely appreciated crop some variants were preferred. It appears that the orange carrot is actually a mutation of the yellow carrot, and it happened many hundreds of years ago.

As the carrot became popular throughout the Arabian peninsula and northern Africa, it found its way into Spain when the Moors invaded in the 8th century.

They had a significant influence on the land, including what crops were sown, which now included the carrot and it was apparently already orange.

The other colored variants were still being cultivated in other places, like the red, purple, white and yellow carrots.

As time went on carrot crops became more and more specialized. The Dutch were the main growers and exporters of carrots, and the variant they used was the Western carrot.

They started to guide their crops into producing sweeter, less bitter carrots.  The aim was also to reduce the hardness of carrots, their woody texture.

So the yellow carrot became the focus of selective breeding, until the orange carrot was obtained. It was significantly easier to eat and had a great reception, and the main reason we have mostly orange carrots today.

As it became popular it remained the sole version of carrots grown in Europe. It’s this orange carrot that the colonists brought to America in the 1700s, along with other crops.

Some say William of Orange is to blame

Sometime in the 17th century we will find William the Silent, a Dutch Count. He’s important because back then the Dutch were under Spanish influence, and they eventually had an uprising led by William.

At the time William was appointed as Prince of Orange, a county in modern day France. The revolt against the Spanish was successful, and William of Orange became a Dutch hero.

All of the above is true and easily verifiable, and now the folk tale begins.

Back in the 17th century the Dutch were still very famous carrot farmers, and it’s said that they began only planting orange carrots, in honor of the Prince of Orange.

Whether that’s true or not is still disputed, but it’s a very common and widely accepted bit of lore and it kind of stuck.

Nowadays the carrots you find are orange, but the other variants are starting to make a comeback.

You’ll find the other carrot variants in health food stores, and usually packed along with the orange carrots.

So in short carrots weren’t originally orange. The orange carrot we know today is actually a mutation of the yellow carrot, which is a very rare version of the white carrot.

Orange carrots are the product of selective breeding, which is why they’re sweet. And although they pack a white a bit of crunch, they’re significantly softer than the yellow carrots of several centuries ago.