Making a great pumpkin pie without evaporated milk is an easy task. And in fact you can easily make a delicious pie just with milk or other ingredients you have at hand.

We’ll go into the proper portions below but you should rest assured your pie will still turn out perfect. After all evaporated milk is really more of a preference than a need for the recipe so you shouldn’t let it hold you back. 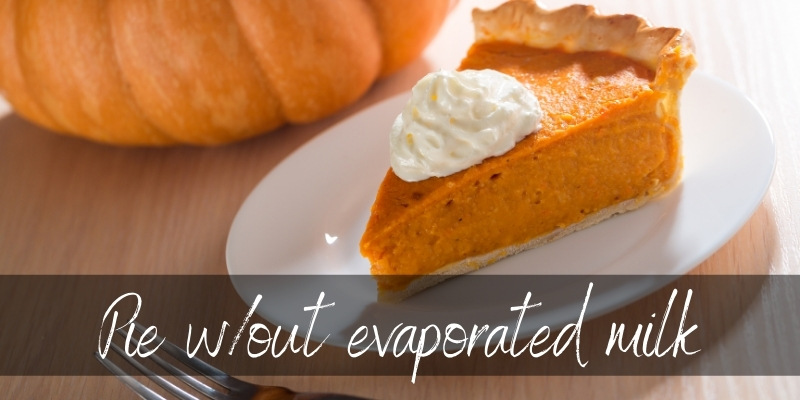 Even if you were to directly replace evaporated milk with the same amount of regular milk your pie would still come out fine. Just a little bit soggier due to all the extra moisture.

While we can use regular milk if we want that perfect pie texture, we need to make sure we got the moisture levels controlled. After all we want our pie to be great and not just passable. However the great news is you likely have all you need at hand.

Add cornstarch to your milk, until you get a thick, creamy texture that’s very similar to evaporated milk. If you’d like to amp up the milk flavor be sure to add some powdered milk in the mix.

One and a half cups of cream can easily replace a can of evaporated milk and won’t affect neither texture nor flavor. It’s easy to add to any recipe and you likely have some at home, so it’s a great alternative.

Yogurt can also be used over evaporated milk, but it has to be thick enough. So plain Greek yogurt should be your first pick. Add as much yoghurt as you would evaporated milk.

Keep in mind that yogurt is tangy, so your pie filling will be a little tangy as well. If that’s okay with you then go ahead. It could be a welcome change from the traditional pumpkin pies !

As we said there’s no trick to evaporated-milk-less pie, and you can fully follow your own favorite recipe just by adding these changes. But what if we told you you could go one step further ?

Why not try a crustless pumpkin pie ?

Suppose you or your family are fans of crustless pies. In that case, you should know that replacing the evaporated milk might improve your recipe.

The risk with not properly preparing a crust is making the overall texture of your pie more plain. On the other hand it sure saves time and the flavor is still there, so there’s a lot of reasons to go for it.

While it would be easy to assume that a pumpkin pie without evaporated milk would crumble when we take away the crust that’s not the case at all. We have made sure our recipe still grant the same texture as any other pumpkin pie. So going for a crustless recipe is totally fine.

Texture is really the main factor we are taking away from when we remove our pie crust. So we’ll need to add cornstarch to make sure the pie still has that perfect consistency. And since we are using cornstarch, we can rely on whole milk again.

The proportions do change however so make sure to note it down. We’ll be using one cup of milk and half a cup of cornstarch or crumbs, your preferred option to thicken a pie. This amount is roughly for 8 servings so you might have to tune the proportions if you cook more or less. But this way you can have a great texture without relying on evaporated milk or spending all that time on a crust mix.

So far we’ve replaced evaporated milk with well, more milk. So in a sense we really haven’t changed the recipe a lot. Milk is just a mainstay in baking but there are valid reasons to avoid it. The good news is that yes, we can replace evaporated milk with non-dairy products, but it might take some more testing to make sure you have the perfect recipe.

Okay, now we need to look over all the milk equivalents. Almond milk is one of the most popular options, but if we are going to rely on it, it must be vanilla almond milk. Vanilla is just the flavor that affects the recipe the least, and in fact you likely won’t notice the change as long as you nail the proportions.

For almond milk this means adding cornstarch as usual but also cutting down on sugar. The vanilla flavoring adds to the sugar level so not accounting for it will affect the resulting flavor.

Coconut milk is also a popular option amongst various circles, though it usually presents the complete opposite problem. Coconut milk usually packs less flavor, or at least it does in its natural presentation. So you might need to amp up the spices or sugar if you want to make up for it.

Another option would be cashew milk. It’s the creamiest, thickest vegan milk and it’s definitely a good addition to a pumpkin pie. Even so, you’re going to need to thicken it.

And last but not least Soy milk is an option you can also consider. The makeup of soy milk means that it even gets that classic brown look milk gives to baked goods. It’s really easy to find plain soy milk in stores as well and the flavor is subtle enough that you really don’t need to mask it nor change the sugar levels. Soy milk can very easily be used as a 1:1 replacement for traditional milk.

As we’ve seen there’s really no shortage of ways to get the perfect pumpkin pie without relying on evaporated milk. All it takes is some creativity and the drive to try out new things and at the end of the day that’s what cooking is all about.