Salami and pepperoni have always been a confusing topic.

Which was first, and which is better ?

Does it matter which you put on pizza ?

How can you tell them apart, and is there really a difference ?

Well, this is what we’re going to find out today. The main difference between salami and pepperoni, and clear up a few of the most common questions.

But to do that, need to understand what each of them is, and them compare them. So let’s start with the basics. 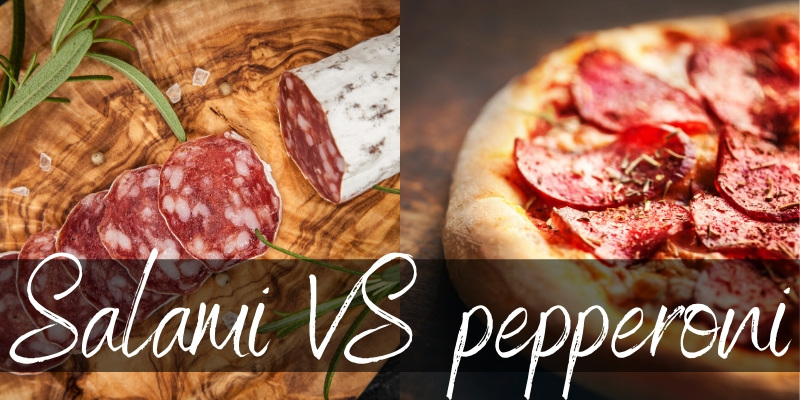 Salami is a type of deli meat that’s actually closer in resemblance to cured, dried sausages. Salami as we know it today is usually of Italian descent, though there are plenty of Spanish, East European, Greek, Asian, and African salamis.

Each region and country has its own style, but the most common ones in the West and in America are the European salamis, especially Italian.

So salami is a very wide and all-encompassing term for any large sausage made of ground meat, fat, and herbs that has been cured and dried, and/or smoked.

It may have white, benign mold on the outside, or it may be plain.

This food item is a very old way of preserving meat, since it has a long shelf life if kept a very cool temperatures. This was important during winter when food was scarce and meat was a an important energy source.

Pepperoni is a type of salami that was born once Italians started emigrating to America.

It’s derived from traditional Italian spicy salami or sausage, and is today very well known as its own food item.

The name pepperoni is actually meaningless in Italian. It’s derived from the word ‘peperoni’ (single ‘p’), meaning peppers, as in the many peppers (hot and mild) added into this salami type.

The usual ingredients are beef, pork, spices including paprika and chili powder, and it’s almost always a fine grain salami.

You’ll find pepperoni on pizza usually, though it’s more than just that since it can be used in pace of salami. Just keep in mind that pepperoni is spicy and will tint the food a red-orange color due to the paprika powder.

Pepperoni is so famous and lover that some folks see is as a different item than salami. In truth, all pepperoni is actually salami, but not all salami is pepperoni.

Main differences between salami and pepperoni

Alright, now you’ve got it clear which is which. Salami and pepperoni are great toppings for any pizza and they’ve both got their own fan base.

But there’s a few crucial differences between these two that you may want to impress your friends with, or simply know for your own satisfaction. So here they are.

The first and probably most important difference, the which is which and who was first.

Salami came first, as a type of deli meat and cured sausage. It encompasses so many versions and recipes it’s really a very wide concept.

Even some legit sausages may be called salami, in some cases, especially if they’re on the thicker side.

Pepperoni is a type of salami, as in one of the many recipes/versions of salami out there. It just so happens to be wildly popular in America, and a very delicious variety of salami to boot.

2. Pepperoni is meant to be red and spicy

When you look at a roll of salami, and a roll of pepperoni you’ll notice a few things.

Probably the first thing you notice is that pepperoni is a bright orange-red, with very fine grain and just barely there fat marbling.

The reason pepperoni is so red is because it has two key ingredients that give it that amazing flavor.

One is paprika, which is powdered red pepper (mild). It’s an European condiment and is widely used in many sausages and salamis, but nowhere is it as common as in pepperoni.

The flavor is kind of sweet and it does resemble bell pepper.

The other key ingredient is chili powder. This bright red, spicy powder is responsible for the hot kick you get from pepperoni, and it also drowns the pepperoni in a red-orange hue that will stain any pizza very nicely.

Both paprika and chili are great when heated, but chili is especially wonderful when hot so it makes sense that pepperoni is one of the most common pizza toppings in America.

As for salami, there definitely are salami types that do have chili powder and paprika as well. It’s just that salami is usually mild and only has the colors of the dried, cured meat and fat used in the stuffing.

3. Salami can be from anywhere, any recipe

Salami is a very wide term, we’ve established that. But that means you can find any and all kinds of salami.

Spicy salami, aged salami, cooked (as in, not dried but still cured) salami, smoked salami, any meat you can imagine in any diameter and from anywhere possible.

A few examples include:

There are many more examples of salami but there are some of the most famous. Ingredients may vary from recipe to recipe, especially the spices used.

Some may have just salt, pepper and garlic, other may include allspice, or mustard seeds, fennel, rosemary, or an entire host of herbs that are specific to that recipe in particular.

Pepperoni is just one recipe, though the proportions of beef and pork may vary according to the manufacturer. But all pepperoni has just paprika and chili powder, along with salt.

4. Pepperoni is beef and pork, salami can be any meat

In terms of the meat used pepperoni and salami are a bit different.

The reason for this is flavor. Each salami type is different, and pepperoni has a specific salty-meaty- spicy flavor, with just a hint of sweetness.

Other meats would overpower the flavor, for example venison is pretty strong, as is horse or donkey and none of them would give the same flavor in the end.

Salami on the other hand can be anything, depending on the recipe used. For example an Italian donkey salami from the province of Vicenza (North-West) is lean donkey meat (60%) and pork underbelly or fat (40%), along with seasonings.

5. Salami can be coarse grain, pepperoni is always very fine

The way salami is made is pretty much like a sausage, at least in the beginning. You need ground meat, a casing, and the accompanying salt and spices, and a starter culture.

A very important element is how finely the meat is ground, because this changes the texture, how long the salami needs to cure and dry, the overall flavor and the look.

A coarse ground salami will have noticeable chunks of fat, and meat pieces just as large.

These dry a bit slower, and need thorough mixing when the mixture is first being made.

In our very personal opinion these salamis look the best, since they look more rustic and traditional and salami is pretty much just that. examples include Soppressata, any chorizo, cacciatore.

6. Pepperoni is often a pizza topping in America

A very well known fact is that many pizzas in America are pepperoni pizza. It’s a national favorite and it’s very delicious.

This led to a rise in popularity for pepperoni, and folks started using it in other meals too, like sandwiches or meat and cheese platter, even adding it to pasta.

The whole reason pepperoni became a staple in pizza, and not something else is a bit of a mystery but we can take a look at some facts.

Pizza became common in New York, where the highest number of Italian immigrants lived. Pizza is also a very much loved Italian food.

And since many Italians came to America, they brought their skill in handling meats and cheese, and this lead to them recreating a lot of traditional recipes with that they had on hand.

That was pretty much the birth of the pepperoni salami: an American-Italian love affair that resulted in pepperoni being present in many (if not all) butcher shops, and it because a topping due to how common it was.

And, since people sometimes like to stick to traditions, pepperoni became the best topping on pizza and for a while was the only topping.

As for salami, you can find it too on pizza, just on much fewer pizzas. Where you’ll find it is most likely a pizza that’s labeled as gourmet, or you might find it in upscale pizzerias. 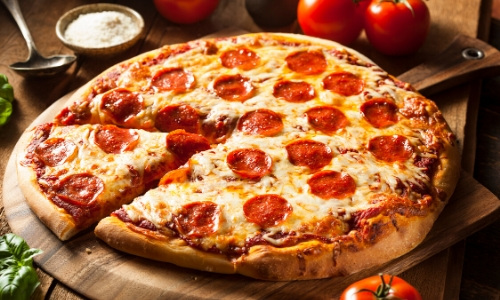 A few interesting facts about salami and pepperoni

Since we’re talking about the differences between pepperoni and salami, let’s also share a few interesting facts about them.

Both salami and pepperoni are safe to eat uncooked

Since both salami and pepperoni are dried, cures and possibly smoked sausages they are safe to eat uncooked.

Salami is not raw, and neither is pepperoni. Both can be sliced and eaten as-is on a meat and cheese platter, without any cooking.

If you want to be on the safe side you can cook them for a bit, and the best method is to lightly fry them in very little oil. Or better yet no oil, and you’ll only get the delicious salami fat in the pan.

And if you’re wondering about the pepperoni on pizza, that’s a very well cooked slice of salami so you’re safe.

The white stuff in salami and pepperoni is fat

Whenever you look at a slice of salami you notice the white marbling. If you’re wondering what that is, it’s fat. High quality, fresh fat and it’s usually pork fat.

Some other types may be used but this works best.

Even finely ground salami like pepperoni has some fat dotting it here and there.

Pepperoni and salami are sometimes halal and kosher

For those who need their food to be halal or kosher, know that not all salami is kosher or halal, and neither is all pepperoni.

As a reminder, halal meat is only meat that has been obtained from an animal sacrificed using a specific method, and blessed by the butcher.

Kosher meat is meat that has only been handled with meat-specific instruments, and has not been mixed with non-kosher meat or foods.

For example pork is not kosher, but mixing several meat types in a single salami (assuming all of them are kosher) is up for debate.

You may find kosher and halal salamis, but you will need to look very carefully at the ingredient list. Your best bet is to go to traditional Jewish and Muslim butcher shops since they will definitely observe traditions.

Finding these items in a regular supermarket may be more complicated.

What Is Salami Made Of ? How It’s Made + A Few FAQ

Here’s What Sausage Casings Are Really Made Of, And Why It Matters

Why Is Tofu So Expensive ? Here’s What’s Really Happening

What Do Raw Eggs Taste Like ? Here’s What We Found Out