Are you a pepperoni fan ? Then you may have some at home right now, or may have had a few slices of pepperoni lately.

No worries, we’re in love with the stuff too ! Crispy, salty, slightly spicy slices on top of a nicely done pizza is on of our favorite sights.

And since we’re fans of pepperoni, and also dedicated to helping folks understand their food, today we’re going to talk everything pepperoni.

What pepperoni is, what it’s made, how it’s made, and all that good stuff.

Pepperoni is a type of fermented, dried sausage that has become one of the most popular lunch meats in America, and for good reason.

It’s beef and pork, with a deed orange-red hue due to the high amounts of paprika and chili powder used in the making.

Pepperoni is a default topping for pizzas and as such many people come in contact with it daily.

Yes, pepperoni is actually a type of salami. This is because salami is a type of large, dried sausage that may be cured or fermented beforehand.

You may also find salami to be smoked, and have a layer of benign mold growing on the outside casing.

The reason you may not think pepperoni is a type of salami is because pepperoni has its own presence in the food industry, almost as a separate food item.

Still, pepperoni is a specific recipe in the salami range, and it’s wildly popular.

Pepperoni has been a part of pizza and our everyday lives for a long time, but no one is sure how pepperoni came to be.

There are rumors and stories, and the most plausible one starts like this:

Pepperoni started back when Italians emigrated to America. This happened long ago, so pepperoni has had lots of time to cement itself as a public favorite among cold cuts and delis.

Back in Italy there’s a few salamis that are spicy and red, and the pepperoni is an American incarnation of those salami.

Since pepperoni was commonly found in many Italian butcher shops and pizza was an Italian food, they eventually merged and became the pepperoni pizza we know and love today. 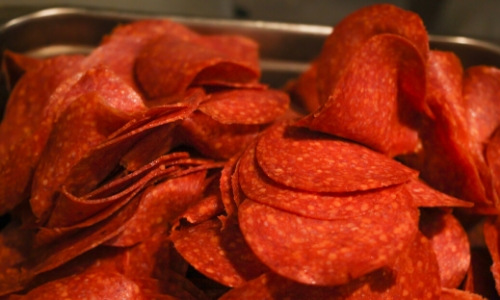 Why pepperoni and not another salami ? We really have no idea, it might be because of the spicy kick that goes well with gooey cheese.

Or it may have been incredibly common and cheap back in the day, so it just stuck and now everyone thinks pepperoni when they hear pizza.

The thing is, no one is sure how pepperoni came to be. Whether this story is the truth or it’s something folks keep hearing, it sure sounds delicious and like pizza and pepperoni were made to be together.

What is pepperoni made of ?

The ingredients in pepperoni are simple enough, but the whole sausage requires a lot of care and time to fully ferment, develop, and dry out.

Certain meats are used, in certain combinations, though you may also find the recipe a bit tweaked here and there.

Tradition states beef and pork are used for pepperoni

Like any sausage or salami, pepperoni starts out as finely ground or chopped meat. Some versions may have a coarser grind but traditionally it’s a fine grind.

Pork and beef are used, in varying proportions. It’s usually higher in beef meat, and the fat is high grade, fresh pork fat.

Salami and sausages need both meat and fat to really suck in the flavor from the other ingredients, but also to preserve better. Fat, if kept at a cool temperature, is a very goo way to preserve meat.

It’s not pepperoni is there’s no paprika and chili

Another very important aspect is the spices. These give the pepperoni life, and two of them are crucial here.

Paprika powder is bright red with an orange tone, and it’s what give pepperoni that tasty, slightly sweet tone and it’s heavily used in many European salamis and sausages as well.

Then there is chili powder, which is equally bright red but hot and this is what brings everything together. Especially in a very thin, crisp slice of pepperoni that’s fresh out of the oven on a pizza.

There are other ingredients too, like salt and curing salt, and sometimes peppercorns but those won’t be present in every pepperoni. The main reason is that peppercorns are really flavorful and may overshadow the paprika. 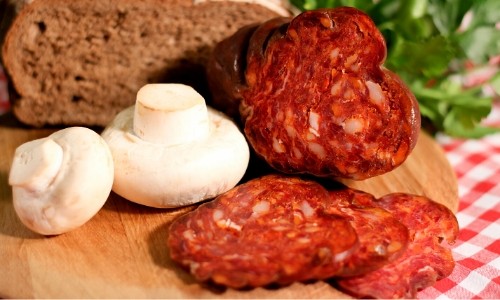 How pepperoni is made

The process of actually making pepperoni is simple, but lots of details need to be observed.

After all, the meat starts out as raw and it needs to be very well cured and fermented in order to avoid any food poisoning.

First, the ground meat is mixed with the seasonings – chili, paprika, salt, curing salt. A starter culture is usually added to pepperoni, since this is a fermented sausage/salami.

The meat mixture is left to ferment for several days in a controlled, warm environment, after which it is fed into casings.

The casing is usually artificial, like cellulose or collagen. The main reason behind this is that pepperoni demand is very high so its production must be fast, and with a high yield.

Cellulose and collagen casings are cheaper and easier to work with, while still providing the meat protection.

After the pepperoni has been fed into the casings and shaped (twisted at each end to separate them), a long line of pepperonis is obtained.

Those long lines are hung to slowly dry out and cure over the following months.

Some pepperoni versions are also smoked, both to increase flavor but also to better preserve the meat.

After several months in a low temperature room (very well controlled), moisture should evaporate and the meat should be cured.

This prevents the spread of unwanted bacteria, and keep the food safe.

A very well trained butcher or food technician is required to check the salami from time to time, to really made sure everything’s going well. 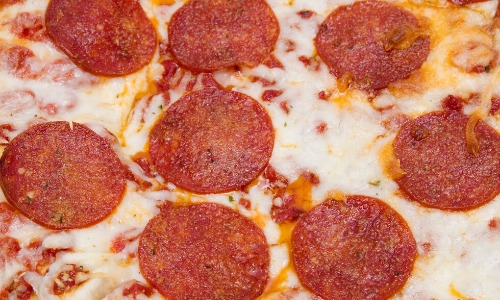 So now we know what pepperoni is, and how it’s made. We know the meat that’s used and we know it takes a very long time for this salami to be done.

Let’s cover a few common questions folks have about pepperoni, and you may find your question answered here as well !

Yes, pepperoni can go bad like any salami if it’s kept in a warm room for too long.

Ideally, pepperoni and salami in general should be kept in a low temperature room , like a pantry that can consistently stay at 10 C/50 F. Or, better yet keep it in the fridge.

If it comes in a plastic cover (aside from the casing) keep the salami in it.

And if you’ve got pre-sliced pepperoni know that constantly exposing it to air will reduce moisture and it will dry out eventually.

It takes about 6 weeks for salami (and thus pepperoni) to go bad if kept at low temperatures. It lasts longer if kept in the fridge.

The only problem is that a roll of salami that’s already been cut, of a packet of sliced salami will dry out unless it’s well closed after each use.

You’ll notice the pepperoni has gone bad when it’s both dry and moldy on the outside.

Can pepperoni be frozen ?

Yes, you can freeze pepperoni to keep it for longer.

Make sure to freeze it in small portions so you only take out as much as you need, as opposed to thawing the whole roll and then freezing it again. 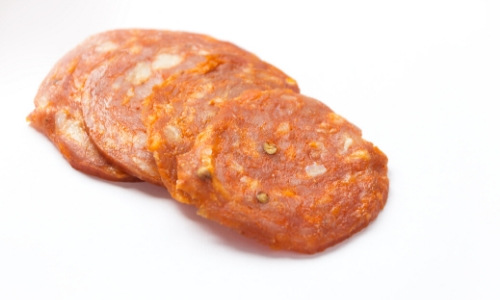 In the freezer pepperoni can last up to 6 months, just make sure to keep it in an airtight container or very well wrapped in plastic.

Also when thawing it make sure to thaw it in the fridge, overnight so you don’t get as much moisture and the pepperoni won’t stay in water that much.

Can pepperoni be made of chicken or turkey ?

Yes, you can find pepperoni that’s made with turkey or with turkey as well as beef or pork. The flavor will be different and you should find a ‘turkey’ or ‘poultry’ label somewhere on the front.

If not, be sure to check the back of the package for the ingredients.

This depends on the brad. Some brands have gluten free lunch meats, some do not.

Most of them are gluten free to begin with, since fillers aren’t usually used when making salami or pepperoni. The meat sticks together due to the pressure of the casing and due to fermentation.

If you’re especially sensitive to gluten then be sure to check the ingredient list for anything wheat based or related, including the casing.

Why is pepperoni fermented ?

Pepperoni is a fermented salami, and this is to keep bacteria away.

During the fermentation process benign starter cultures are added to fight off any possibly dangerous bacteria on or in the meat.

This process takes a few days and is necessary to keep diseases at bay.

The end result is a funky smell and tang, much like aged cheese. Most folks love that so in time fermentation became a flavor preference, as well as a way to keep the meat safe.