If you love sweet potatoes, then you know preparing them can be a real pain sometimes. They’re very difficult to cut through, especially if you get bigger ones. Cutting sweet potatoes is a frustrating mix of jammed blades, splits going the wrong way, and the occasional accident.

But why are sweet potatoes so hard to cut ? What’s in their genetic makeup that makes them both delicious yet frustrating ? Here’s what we found out. 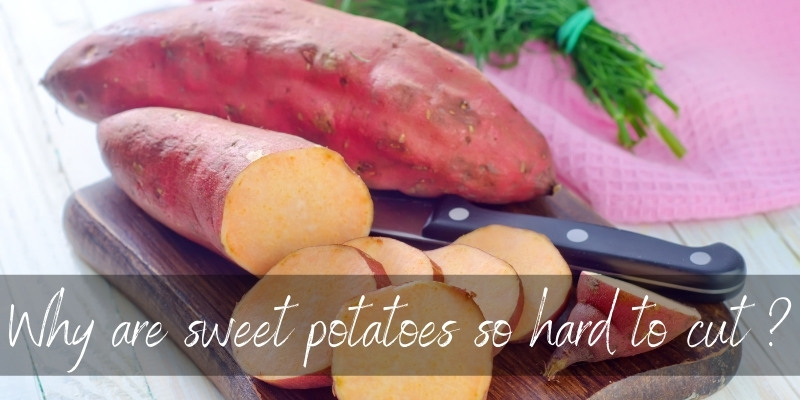 Why are sweet potatoes so hard to cut ?

The main reason sweet potatoes are so hard to cut is that they’re much denser than a regular potatoes. Sweet potato has smaller molecules, and they are packed much tighter than other vegetables. They resemble carrots and butternut squash in this regard.

Despite being similar, sweet potato and butternut squash are not within the same family and are not related. Nor are they related to carrots.

Sweet potatoes are not related to regular potatoes

They’re not even related to potatoes ! The reason sweet potatoes have their current name is because when Columbus and his crew first landed in America, the sweet potatoes were already a significant crop of the native population. The most common name at the time was batata, which became mixed with the West Andes word for potatoes, and the result was patata.

Sweet potatoes are also sometimes called yams, and the history of this naming is probably the most confusing. There is no specific, agree-upon vegetable that was the original yam, but instead several tubers are/can be called yams in different parts of the world.

To clear things up, let’s explain:

Read also: Is It Safe To Microwave Potatoes ?

Alright, now we know these are are very different plants, so let’s get back to the question. Why are sweet potatoes so hard to cut ? Aside form being so darn dense, they’re also very sticky, due to their high sugar content.

How high ? About 4.2 grams of sugar per 100 grams of raw sweet potato. That’s a little over 4% of the entire tuber. And you may have noticed that roast sweet potato gets a very intense sweetness, much like caramel.

That very same sugary sap that gets released when we cut through sweet potatoes also makes a knife’s mission much harder. The sap sticks to the blade, which then sticks to the flesh of the potato.

So you get stuck and attempt to wiggle the blade out of the sweet potato and end up jut splitting it at an angle. These things are difficult to cut, especially with a thicker blade. There’s a way around this, though.

How to soften sweet potatoes for cutting

Most of the time when you need sweet potatoes, they will end up in a stew, a mash, a puree, and rarely as a fry. But this method will work very well even if you’re looking to make fries. So take a look. 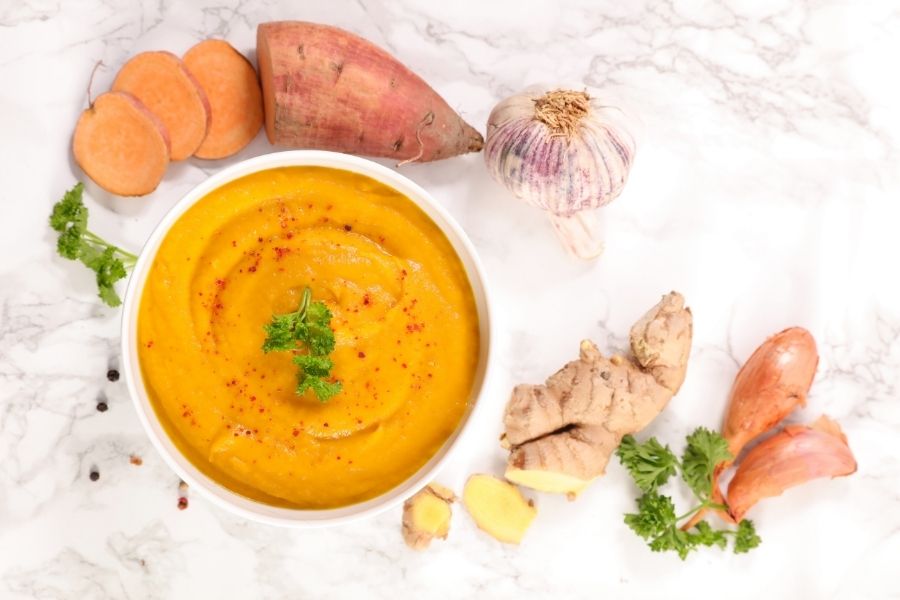 You’d first need to fully peel the potato, and chop off the ends. Place them in a pot with cold water, bring to a boil and let simmer for at least 30 minutes.

The outside will definitely soften, and your potatoes will be much easier to cut through. Now, let’s talk about what you’re cooking, because it can change how long you cook them

So if you need your sweet potatoes soft, for mashed sweet potatoes or cream soup, then you can let them cook through completely. Well, if you need them in a stew you will need to let them soften just a bit, then continue cooking in the stew. We’re guessing you still want some bite to them.

And finally, if you’re looking to make fries out of the potatoes, here’s our recommendation. If your potatoes are small-ish, keep them whole. If they’re big, cut them in half (as best you can) and then only boil them a little.

They only need to soften enough to let the knife go through them reasonably well, like a regular potato. This can be as quick as 10-15 minutes after the water is boiling.

You will need to drain and dry them a little, or maybe a little more. Too much moisture in the potato will splatter hot cooking oil all over the kitchen and onto you. You can try dressing them with a bit of oil and putting them in a sheet pan, to roast/fry in the oven. Do not turn the broiler on if you put a lot of oil, you’ll get a grease fire.

You can also try the microwave

If boiling isn’t really your thing, try heating them through in the microwave. Again, be sure to peel them completely, and use a bowl on top to keep steam and moisture in.

Cook them on low for a few minutes, checking as you go. If you cook them on high you risk burning one end, while the other is still very hard.

In about 10 minutes or less, your sweet potato should be soft enough to handle. It will also be burning hot, so use oven mitts and/or tongs. We recommend cooking one potato at a time, so you get even heating and softening. And be sure to put them on a plate, not directly in the microwave. They will get sticky.