Pumpkin and butternut squash are a common sight once the cold season hits. They’re one of those sure signs that fall has arrived, and Santa is only a couple of months away !

So you set yourself to make some delicious pumpkin pie. But when you go out into the wilderness that is the produce section, you stop and wonder which to pick. Butternut squash or pumpkin ?

Does it even matter ? It turns out there is an appropriate use for either of these lovely orange gourds, and they overlap significantly. So let’s do a thorough comparison between the two. 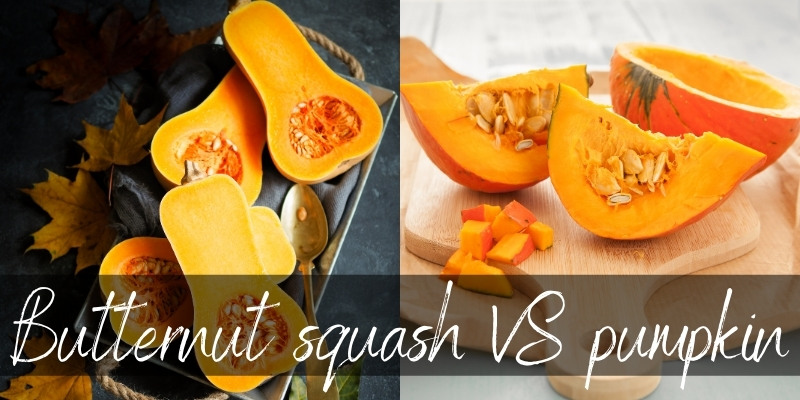 Pumpkins have mush less flesh per vegetable than butternut squash, and can be significantly larger. While butternut squash is more for baking, roasting, making soup and other edibles, pumpkins are mostly decorative.

Either of them will work in a pumpkin pie, but a butternut squash has a better flavor and more flesh to work with. Despite the name, pumpkin pie hasn’t always been made with pumpkin.

Is pumpkin the same as butternut squash ?

No, pumpkin is not the same as butternut squash. They look different, taste very similar, and are of the same family. Even so, they are two distinct vegetables.

Both are squashes, and butternut is better for pumpkin pie. As botany describes them, they’re in the Cucurbitaceae family, right along with zucchini, courgettes, cucumbers, pumpkin, butternut squash, and yes watermelons ! 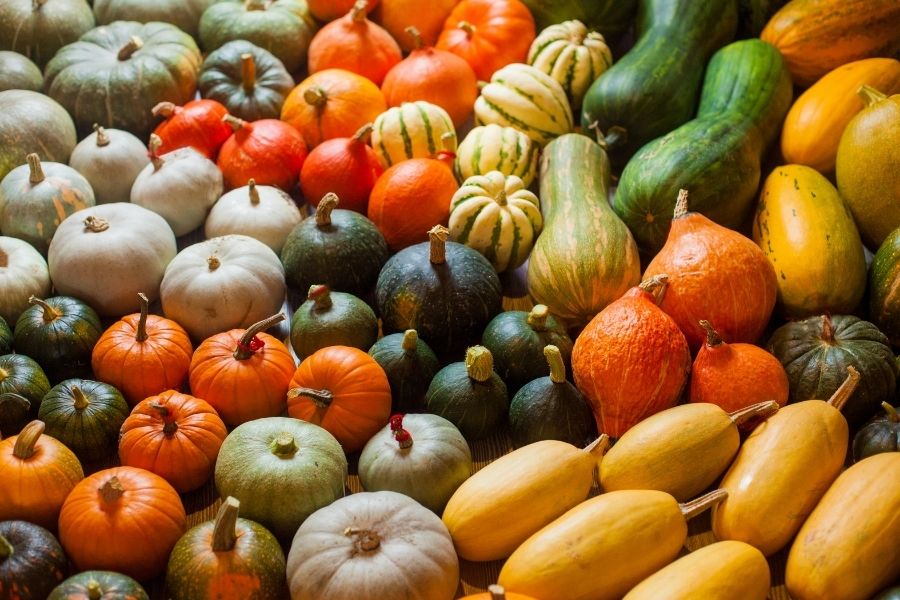 Within that family there are several sub-families, and butternut squash is very closely related to pumpkin. In fact they’re ‘siblings’, you could say. They’re both squash, but pumpkin is considered a winter squash due to its thick outer skin. Butternut is still a winter squash, but it ahs a much thinner skin (it matters).

That means they’re harvested in the beginning of the cold season, and will last all of winter if stored properly. That’s a lot of nutrients and a lot of reasons to fall in love with these veggies.

When making a pumpkin pie, a butternut squash is commonly used. It has much more flesh to work with, and can even develop a sweeter, denser flavor than regular pumpkin.

When Halloween rolls around your chances of carving a butternut squash are very slim. They’re dense, difficult to cut through, and just not suited for carving.

Pumpkin is a type of squash, usually referring to the orange, ribbed ones that typically appear around Halloween. They start out green, and as they ripen they turn orange. Even so, there are varieties that remain a light, gray-green even when ripe. 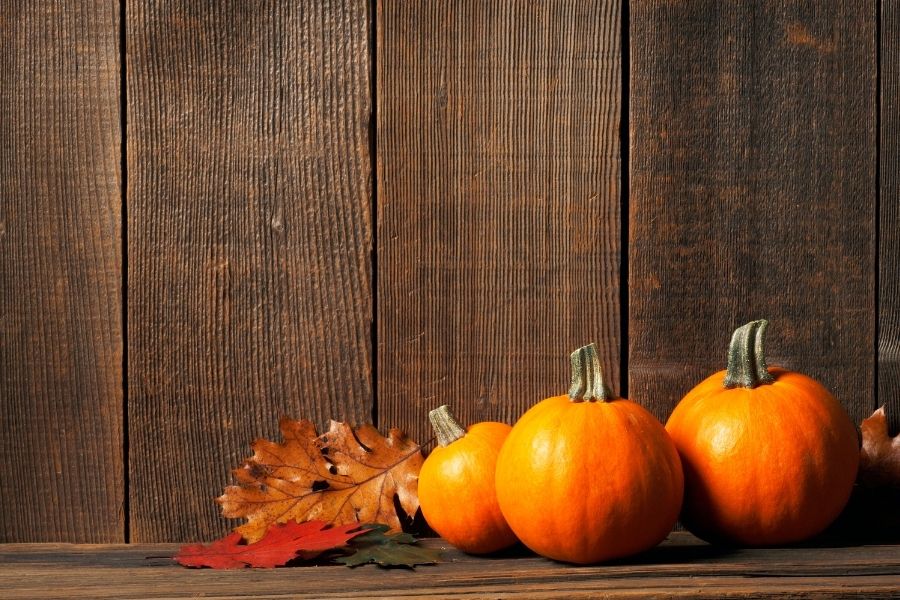 Pumpkins are empty on the inside, the same way bell peppers are empty inside. The seeds are in the middle of the vegetable, suspended and connected through a series of fibrous veins. All around those fibers, the pumpkin is empty.

When you pick up a pumpkin it will be very light, despite its size.

What is butternut squash ?

That larger end is where the seeds and the ’empty’ part is. It’s the part most similar to regular pumpkins. The upper part is compact, dense flesh that is great for roasting.

Butternut squash is actually meant to ripen for 2 months after harvest, to develop flavor and sweeten even more. Like pumpkin, it’s most likely on shelves at the beginning of the cold season.

Butternut squash is a recent invention

Butternut is a recent invention, at least compared to when the pumpkin started appearing. It was developed in 1940 in Massachusetts, and it’s actually a cross between the crookneck squash and the hubbard squash.

It’s been heavily used since it came out, mostly because it’s so full of sweet, orange flash. In terms of flavor it’s very similar to pumpkin, in fact it can even get sweeter if you let it ripen enough.

Now let’s take a look at a few key points in the pumpkin vs butternut squash comparison. 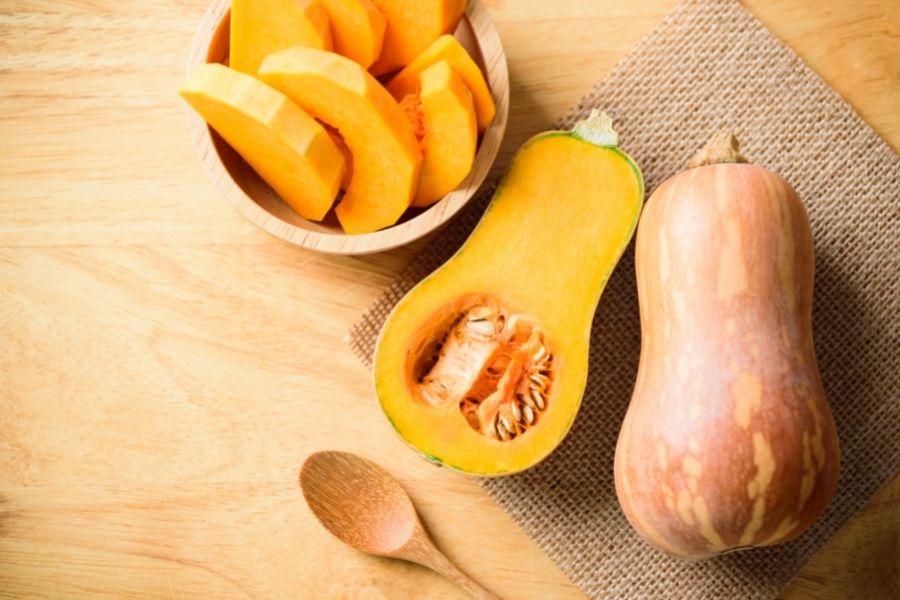 Pumpkins are mostly used for decoration

The way you use these two squashes is what really sets them apart. In theory you could use both for the same use, but they’re not as well suited.

Pumpkins are much better for decorating. They’re empty inside and light, making them the perfect carving vegetable. And since they grow in so many interesting and unique types and colors, they look amazing on a porch. Anywhere, really.

As long as you’re willing to put in a little effort, light some candles and not rake the fallen leaves, you’re good !

If you were to try and cook pumpkin, it would work. But you’d get a small amount of flesh for a lot of waiting. The flesh inside a pumpkin is maybe an inch thick, maybe even less. There’s a lot of carving around the edges to get the flesh, and no pie is worth that.

Not when you have a better option literally next to pumpkins in the store. Yes, butternut squash is all that. It’s heavy for its looks, it’s full of delicious, sweet flesh that’s ready for roasting, and you can bake two whole pies with just one of these !

The only downside is they’re amazingly difficult to cut through. Since they’re so thick, the knife often gets stuck and you need to be careful. Cutting yourself is a real option when opening a butternut squash.

As for decoration, there’s no real point to using them that way. Carving them isn’t easy, you’ll notice this when you try to cut one open. And if you try to make a jack-o-lantern you only have a very small, fist-sized space to do so. A candle can’t reasonably burn in there.

Butternut squash has an edible skin when cooked

Another important point is the skin on both of these vegetables. When you roast a butternut squash, the skin becomes edible as well. It’s a thin layer, right over the flesh of the pumpkin.

Cleaning the squash is more difficult, as it can have sticky spots from cuts. If dirt got onto those spots, it’s difficult to scrub off.

Pumpkin skin isn’t as thin as butternut squash. It’s a winter squash and this means that its outer skin needs to be cooked very long and slow, in order to be edible. Even then, it might not be the best idea.

So if you or your family love roast pumpkin and would like a type that has edible skin, go for butternut. This also comes in handy when you’re prepping it for pie. You can theoretically use all of the butternut, if you roast it long enough and cleaned the skin very well.

Pumpkins and butternuts are harvested around October

Pumpkins are a staple of the cold season. Once September fades away and October creeps up, you’re going to see more and more pumpkins. Either on front or back yards, in stores, or maybe on your neighbor’s porch !

They don’t do well if left out in the cold for too long, so all of them have to be harvested by November. In fact, by then they may even turn mushy and start to rot, if still on the ground.

Butternut is of the same strain, meaning you will find it on the vine around the same time as pumpkin. That being said, some folks may pick their butternut earlier, so the skin doesn’t thicken as much. They still need to ripen a few weeks though.

The skin is important. It’s what keeps the butternut and the pumpkin safe during winter storage. After all, they’re winter squashes, meaning they can survive until spring if stored the right way.

Is pumpkin sweeter than butternut squash ?

No, pumpkins aren’t sweeter than butternut squash. There’s carving pumpkins and there’s sugar pumpkins, but even the sugar ones are a little less sweet that a ripe butternut.

So if your dish is meant to be sweet, then go for a butternut squash. It gets even sweeter if you slow-roast it for a couple of hours. The juices caramelize and the sweetness is more pronounced.

In short, butternut squash is just the thing you need when looking for your key ingredient in a pumpkin pie. If you’re looking for decoration then go right ahead and get the biggest, scariest pumpkin you can find.