Are you just starting to make your own tomato sauce at home ? You can end up saving a small fortune, but the main takeaway is the satisfaction of knowing you made it. And you can cook a large batch, can it for later, and enjoy for months to come.

What do you do when your beautiful tomato sauce turns orange ? It’s not bad in terms of taste, in fact it’s just the way it’s supposed to be. But why is orange ?

It turns out there’s a couple of reasons for that, and you can avoid them in the future. Until then, don’t throw away your orange tomato sauce if it tastes just fine. 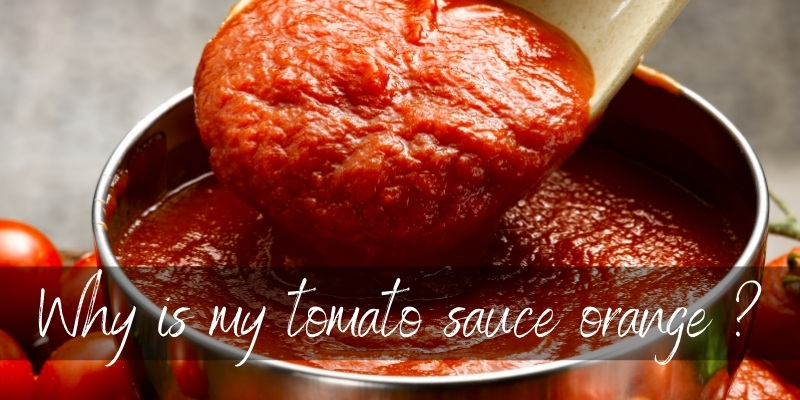 Table Of Content show
1 Why is my tomato sauce orange ?
1.1 You’ve added in too much air
1.2 You’ve left the skins on
1.3 The tomatoes were not ripe enough
2 How do you make tomato sauce bright red ?
2.1 Remove the skins
2.2 Simmering brings out the red
2.3 Use canned tomatoes and tomato paste
2.4 Add a splash of red wine
2.5 Add a dash of paprika

Why is my tomato sauce orange ?

Tomato sauce can turn orange when you blend it, as it incorporates some air and the natural pigment will look orange instead of red. This is especially true if you’ve left the skins on the tomatoes, as those contain the most pigment.

Another reason would be underripe tomatoes. Doespite looking red, many tomatoes are not actually fully ripened. We’ll explain all of this in more detail in the next segment. But first, let’s talk a bit abut that orange color.

Lycopene is a natural pigment found in tomatoes, red peppers, papayas, and carrots. It’s a type of carotene, which means it’s got a yellow base. So it will shift from red to orange to yellow to bright yellow, as opposed to anthocyanin which shifts from red to blue (think berries and their juice).

So your tomato sauce is not meant to be throws away if it has an orange hue. It’s simply the way its pigment reacts to oxidation, and the way it looks when it’s thinned out by air. Let’s take a look.

You’ve added in too much air

The most common culprit of orange tomato sauce is the blender. Whether it’s an immersion blender or a standing one, the result is the same. The blades crush the ingredients and beat in a significant amount of air. You’ve probably noticed how frothy creamed soups come out. The same goes for tomato sauce, and the orange is a result of the tiny air bubbles beta into the sauce.

Read also: Should You Add Sugar To Pizza Sauce ?

You may try cooking the sauce for a few minutes on low, to remove some of the excess air. This should deepen the color a little, but it might not bring it back to bright red.

You’ve left the skins on

This is often tied into the first reason, but skin-on tomatoes have three times more lycopene than skinless. So this means that if you blend it – most likely to break down the skins – you’ve got a much higher chance of getting an orange sauce. 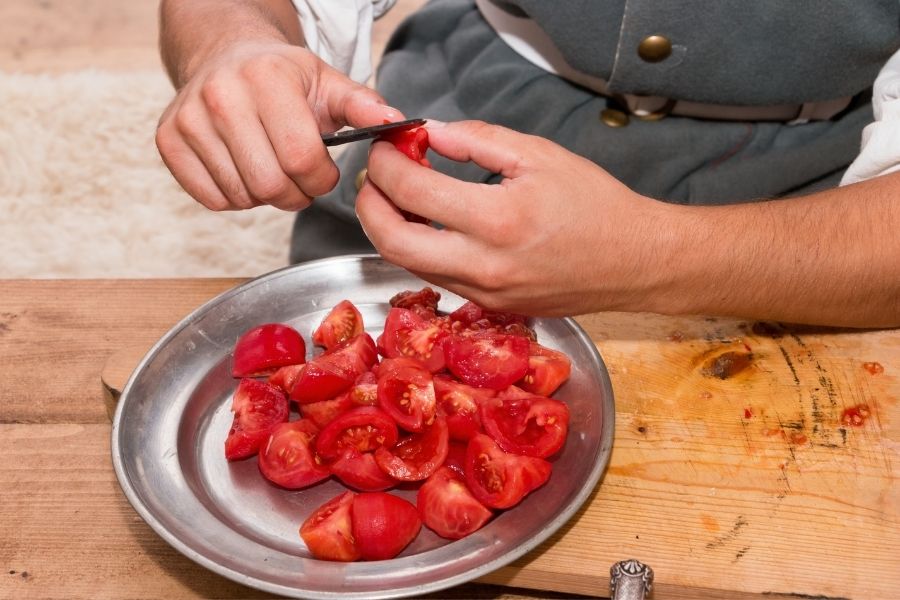 You can bypass this by lightly scoring the fresh tomatoes. Don’t cut into the flesh, you just need to prick the skin. Then blanch the tomatoes, you should notice the skins starting to peel back. Let them sit there for about 30 seconds.

Remove the tomatoes from the hot pot, and place them in an ice bath. This will shock them and further peel the skin. So pick them up and peel them, and this way you should get less orange in your sauce. Also less reason to blend the sauce, again leading to less orange.

The tomatoes were not ripe enough

We mentioned tomatoes can be underripe even though they’re red. Here’s how this happens. Normally tomatoes turn from green to yellow to orange to red, and then they’re ripe. But this takes a long time, and often farmers are looking to turn a profit.

So nearly all tomatoes on sale are the type that develops its color before actually being ripe. You can notice this if the tomatoes are not a deep red, and when you squeeze them they’re not squishy. A ripe tomato is soft, almost softer than a very ripe avocado.

So if the tomatoes you’re picking up are fairly firm but bright red, when you cut into them whey won’t be red inside. They’ll have that disappointing green or yellow inside, where the seeds are.

You can still cook with these, but they won’t offer you the best tomato flavor. They will be kind of sour, definitely acidic, and not sweet at all, not by a longshot.

And there’s never a good reason to add sugar to a tomato sauce. if your tomatoes are good, what little acidity is left is gone by the time you simmer it for about an hour. This will also deepen the flavor and sweetness without added sugar.

So how do you get around this ? Wait for the end of the tomato season, when they’re definitely ripe. Buy enough to make a big batch of tomato sauce, then can it in smaller portions to use in the following months. It freezes very well.

Another option is to trust the San Marzano tomatoes, the canned ones. They’re ripe, roasted, and skinless. Chop these down and use them as the base for your tomato sauce if you’re in the middle of winter.

How do you make tomato sauce bright red ?

You can get bright red tomato sauce, there’s just a few things you need to take into account. Make sure you use really good, ripe tomatoes if you’re doing this with fresh. You will need double the amount you think you need. This is because a good sauce is not too runny, and a ripe tomato is juicy. You will need to cook it down a lot, so you’ll be left with half or less.

If you really want to blend the tomatoes, remove the skins first. This way you’ll get less orange, but there’s no guarantee you won’t get any at all.

Even if you’re not planning on blending it, you should remove the skins anyway since they will only get stuck between your teeth. Tomato skins, like bell pepper skins, are notoriously hard to break down.

Simmering brings out the red

Don’t rush your tomato sauce, no matter what you’re going to be using it for. This means you should first bring it to a boil, then let is simmer on low for a few hours. Yes, it’s a slow process but this is the only way to get a really good sauce that doesn’t taste sour or too raw. And you don’t need to add sugar to this kind of tomato sauce !

And one more thing ? Simmering brings out eh red in a tomato sauce, and it can get to a deep, dark red even. Just be sure to stir it even not and then. Use a lid, because your stovetop will get orange splatters everywhere.

Use canned tomatoes and tomato paste

If you can’t find fresh, perfectly ripe tomatoes, use canned instead. You stand a really poor chance of getting nice, red tomato sauce if you’re cooking with cherry tomatoes in January. it’s simply not tomato season, even if they say ‘ripened on the vine’ or ‘hothouse tomatoes’. We just talked about underripe red tomatoes, put them back down.

Maybe you’re wary of canned products. But you’re robbing yourself of some really good options out there if you think all canned food items are bad. If you want to be sure, splurge on the more expensive ones and see how they work out for you.

Be sure to pick up some tomato paste. This is a strained tomato sauce that is dark red, and it will bring some extra flavor to the tomato sauce. If you’re thinking restaurants bother to cook tomato sauce from fresh tomatoes you’re wrong.

They’re supposed to serve you quickly and put out quality food. So they will use whatever ingredients they have on hand, you won’t see a chef dedicating an entire day to making tomato sauce for the entire year.

Add a splash of red wine

Another ingredient, not mandatory, is one that will definitely deepen the red color. It also brings a nice note to the tomato sauce, rounding out the flavor. It may not be for everyone, which is why we don’t say it’s mandatory.

For example it may not be the best base for a pizza sauce, but it’s absolutely divine for bolognese.

Read Also: Why Is Ketchup Red ?

Add a dash of paprika

One more thing you can try, and this will add a bit of sweetness, is to add some paprika. This will bring more red to the sauce, though keep in mind it has the same pigment as tomatoes so blending it may not be the wisest choice. 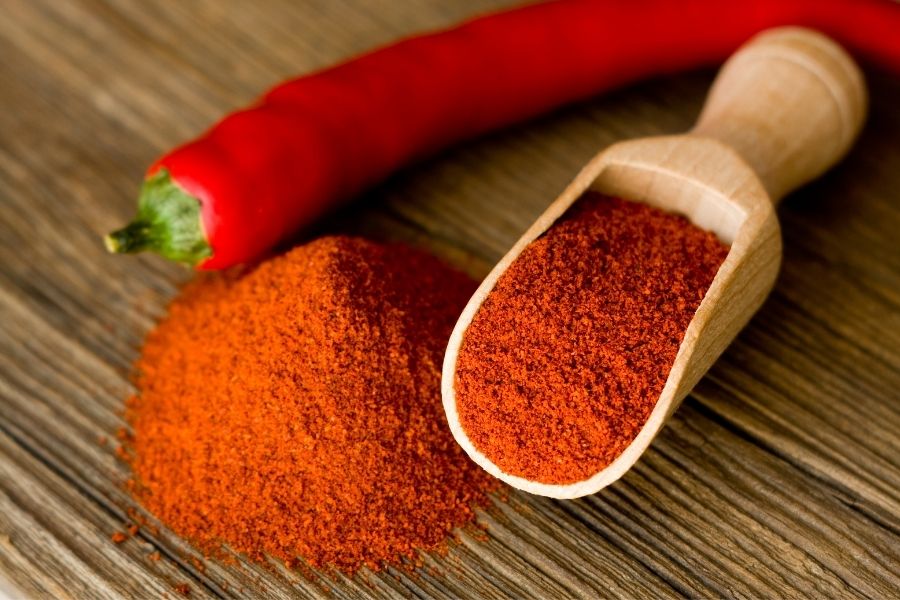 And that’s pretty much it. If you find yourself with orange tomato sauce, do not fret. It’s not necessarily a bad thing, simply a chance in color and the taste should be largely the same.