Sprinkles seem to be what dreams are made of, at least little kids’ dreams And adult dreams, because who here doesn’t get excited when they see anything with rainbow sprinkles on top, regardless of age ? These colorful confectionery additions seem to make everything better, from donuts to cake to ice cream to coffee toppings, anything !

But what are they made of ? What are sprinkles made of, and where did they come from ? IS there a reason they come in so many shapes and sizes ? What about chocolate sprinkles, do they really have chocolate ? Don’t worry, we’ll take you through the ins and outs of sprinkles, and also explain what the most common versions are. 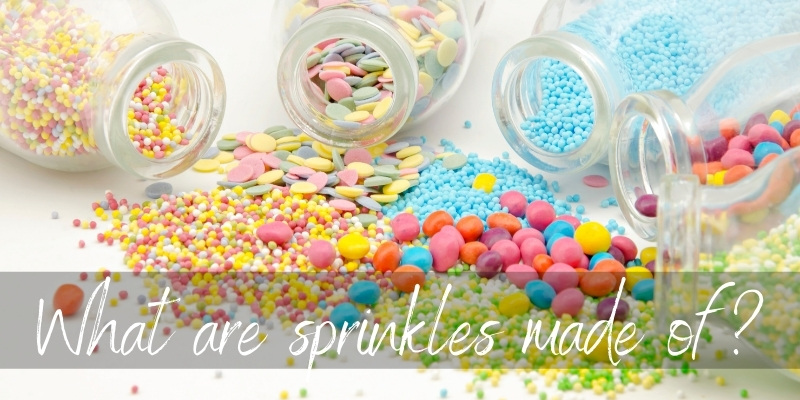 Table Of Content show
1 What are sprinkles made of ?
1.1 Do sprinkles have wax in them ?
1.2 Are sprinkles made of bugs ?
1.3 Is there chocolate in chocolate sprinkles ?
2 Here are some of the most common types of sprinkles
2.1 Nonpareils are tiny, round, and opaque
2.2 Jimmies are thin and long
2.3 Confetti sprinkles are flat, opaque, and colorful
2.4 Sanding sugar is a large-crystal, colorful sugar
3 What sprinkles do you use in birthday cake ?

What are sprinkles made of ?

Sprinkles are a sweet confectionery made from a mixture of : sugar, corn syrup, corn starch, artificial colors, and sometimes confectioner’s glaze. The exact ingredients of each sprinkle type varies, but the bulk of the recipe relies on sugar and corn starch.

The ingredients are mixed in the form of a paste, which is then fed into an extruder. The machine pushes out various shapes, though the most common one is just thin, long strands that are then broken down into the sprinkles we all know.

After extrusion the sprinkles can go several ways, such as being coated with confectioner’s glaze, or into an oven to be baked dry so they are crispy, or simply left to dry as-is.

Do sprinkles have wax in them ?

Yes, some sprinkles have a bit of food-grade wax in them, especially the ones that are not meant to bleed out their color. It’s the outer coating of the sprinkles. The wax in those sprinkles is usually edible paraffin wax, but should not be confused with the paraffin wax used for candles.

Why do sprinkles have a bit of wax in them ? To prevent them from sticking together or melting in your hand, which is especially useful for chocolate sprinkles.

Are sprinkles made of bugs ?

Some sprinkles may contain insect-based ingredients, though some many not. Sprinkles are not made of crushed and ground up bugs, but some may have some shellac coating on them, instead of wax. Shellac is a secretion of the lac beetle but does not involve crushing the beetle and adding it into the sprinkles.

Instead, shellac is harvested from the trees on which the lac beetle lives. It looks a lot like an amber dry, hard resin. It is warmed over a heat source so it melts into a thin sheet. Any bits of tree bark or stray insects are filtered out of the shellac. Once the sheet is formed, it’s broken into smaller pieces and sold as-is. You can then melt it into alcohol to produce a sort of varnish, and it’s also the version of shellac that is sprayed onto some sprinkles.

No one’s killing insects to make shellac. It sounds like a good way to get you off sprinkles though, doesn’t it ? Instead, the amount of lac insects needed to excrete enough resin to make a kilogram of resin ranges from 50,000-200,000. It sounds like a big number, until you look at how many lac insects swarm onto a single tree (about 150 insects per square inch).

Alright, that was shellac. What about a red food dye, carmine ? That is, indeed extracted from insect bodies. The insects are cochineals, and their entire insect body is dried, crushed into a fine powder, and boiled in a solution to separate the pigment.

Not all red dyes are carmine, though. Carmine is labeled as E120 (in Europe) or CI75470 (in America). There are plenty of other red food dyes, derived from red berries or bell peppers or beets. 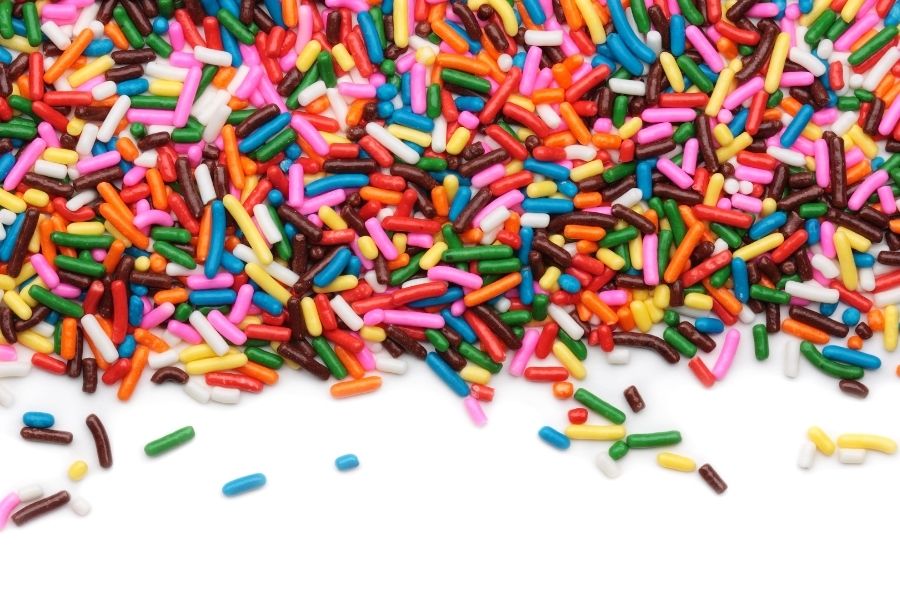 Here are some of the most common types of sprinkles

There are many types of sprinkles, simply because people refer to sprinkles as any sort of colorful sugar confectionery that may be sprinkled onto a dessert. It includes all sorts of shapes and sizes and colors, as long as they are sweet and can be used as decoration. So let’s take a quick look at the most common forms of sprinkles.

Nonpareils are tiny, round, and opaque

Nonpareils are derived from the French ‘non’ (no, not) and ‘pareil’ (the same), meaning these sprinkles were considered unparalleled in looks and taste. This was all the way back in the 18oos, when they were used as decoration for obnoxious, elaborate banquet centerpieces.

You’ll find these sprinkles as tiny, opaque spheres that come in all sorts of colors, and various sizes. Some are matte, some are metallic (like gold or silver) some are pearly, and some are a combination of everything. These are notoriously difficult to chew through, though some brands may have developed a version that is easier to eat.

Jimmies are thin and long

The sprinkles most people think of are also called jimmies in some parts of the world, or hundreds and thousands, or even vermicelli due to their resemblance to small worms.

These sprinkles are the most common ones, and they’re easier to eat than nonpareils. They come in all colors, and are usually very small: about 1 mm thin and 3-4 mm long. These are the sprinkles normally used on birthday cake, and may even be used in the funfetti cake batter.

Confetti is flat, round, colorful sprinkles that are harder than jimmies. They also go by sequins, or sugar shapes. Not only do these come in different colors, but they also come in different shapes. You may find them as flower heads, horses, cat heads, spiders, stars, hearts, anything at all.

The very colorful ones may also be used inside cake batter for funfetti cake, in place of jimmies.

Though not technically a sprinkle, sanding sugar may be used just like sprinkles. This is just sugar crystals, but larger than regular table sugar. It’s always colored in different hues, and in some cases may even appear metallic.

Depending on the brand, the sugar may be opaque or transparent, and it may come flavored or not.

What sprinkles do you use in birthday cake ?

The sprinkles normally used for birthday cake are the thin, long ones usually known as jimmies. This is because back when birthday cake became established as a white, vanilla cream cake, jimmies were the go-to sprinkles, and they were usually in rainbow colors.