Birthday cake has become something of a phenomenon. It’s sweeping across America and it’s had resounding success so far. What is birthday cake, you ask ? Is it a specific flavor ? Who decided this ?

It turns out there is a specific birthday cake flavor, and it has a very interesting backstory. That being said, its commercial success is mostly due to childhood nostalgia. Let us explain. 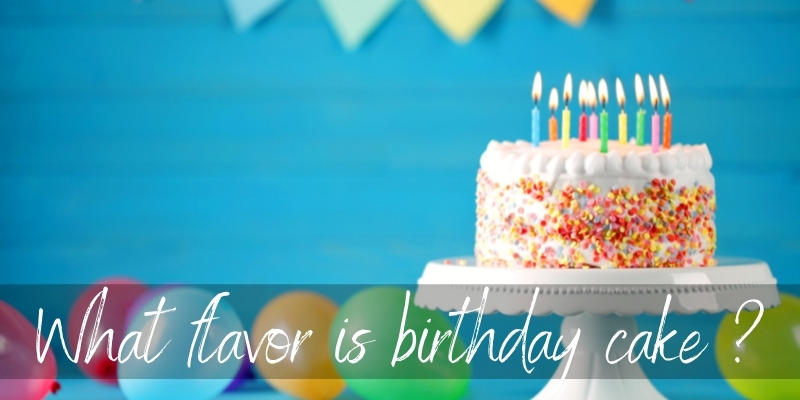 What flavor is birthday cake ?

Birthday cake, in terms of flavor, is known as a strong vanilla buttercream flavor, and it is always accompanied by rainbow sprinkles. The sprinkles themselves have no specific flavor, they’re there just for color. The cake in vanilla cake is white cake, the cream is vanilla buttercream, and so is the icing.

That being said, this is not an officially-recognized flavor that all states have agreed upon; there is no law stating what this flavor is. However, there is a general, unspoken consensus that ‘birthday cake’ is pretty much the same as funfetti cake.

Why is birthday cake becoming popular ?

And with funfetti cake our story begins. Birthday cake, as a flavor, doesn’t truly exist. Your birthday cake can be any flavor(s) you like, and everyone will agree. But it seems that back in 1989, Pillsbury came up with a way to sell their funfetti sprinkles. The idea was to make a plain, simple, good cake (white cake with vanilla) to showcase their funfetti (fun+confetti).

The result was this ad, in which the Pillsbury mascot wheels in a tub of funfetti sprinkles with a lit fuse. When the tub pops, the cake is decorated with colorful sprinkle. Throughout the ad, the narrator ties together the idea of funfetti, birthdays, showing love for your children, and that ‘nothing says lovin’ like funfetti’. Here’s the ad if you want to see for yourself.

That was pretty much the birth of the birthday cake, as Pillsbury were the first to introduce funfetti cake. More and more subsequent birthday cakes were vanilla and sprinkles, to the point where birthday cake became a type of cake on its own.

Alright, so why is this flavor so popular now ? We don’t have exact data as to why this came about, but we have a theory. Remember how the ad for funfetti was back in 1989 ? Everyone who was a kid back then is now an adult, and has very real spending power. Appealing to childhood nostalgia works for many people.

So there you have it. Feel free to disagree with out theory, but we’re sticking with it. Nostalgia sells, and birthday cakes are very much nostalgic, especially when you’re 34 and coming home form work on a Thursday.

What kind of sprinkles to use for birthday cake ?

You can use any sort of sprinkles on birthday cake, as long as the colors don’t bleed out. The best sprinkles for this are the ones that are sealed with either confectioner’s glaze or edible wax. This prevent the color from seeping when the sprinkles come into contact with the cake batter or frosting.

This means you should look for sprinkles that are a bit shiny, since these are usually the coated ones. In terms of color, the usual ones are rainbow sprinkles, but you can use whichever colors you like.

We don’t recommend using nonpareils or sequins. These are harder and tougher than jimmies, and as such they will be a bit harder to eat.

Can you use vanillin instead of vanilla in birthday cake ?

You may need to add a bit more vanillin that you initially think. Birthday cake is an especially vanilla-heavy cake, from cake batter to frosting.

Put your own twist on the birthday cake

If you want to change things up, or put a twist on the birthday cake idea, you can make it your own. Birthday cake relies on the beautiful interplay between sugar, butter, and vanilla. The result is an irresistible, delicious cake that smells and tastes amazing, and also looks delicious. Here’s a couple ideas on what you can try and do.

Keep the vanilla, add something fruity

Since birthday cake relies on vanilla as its main flavor, you can opt to keep it, but add a little something extra. To keep the flavor in line with the color of the sprinkles (as in, colorful, rainbow-like), we recommend you go with one fruit flavor.

It could be any fruit, any berry, anything you think would work with vanilla. So strawberry, blueberry, pineapple, coconut, anything fresh and fun would be welcome.

If you want to make a very different cake, why not swap the vanilla for chocolate ? The cake dough could be chocolate as well, with a deep, dark chocolate ganache. The colorful sprinkles would show up even better on the cake if they were mixed into some simple whipped cream and piped onto the cake.

What if you do want to keep it a white cake, but don’t want any vanilla ? You substitute the vanilla buttercream with a cream cheese frosting ! Even if you decide to add some vanilla to the buttercream, it won’t be nearly enough to overpower the cream cheese flavor.

And if you decide to turn this into a no-bake cheesecake inspired birthday cake, the result would be delicious indeed !