Looking to branch into other chocolate types ? Then you may want to know just what the deal is with white and dark chocolate. Even more, you’ll want to know which is better, especially if milk chocolate is all you’ve ever had.

So let’s explain what dark and white chocolate are, and how they’re different from each other. We’ll also talk about the weak and strong points of both, since those matter a lot when you’re deciding which one to work with for a dessert. 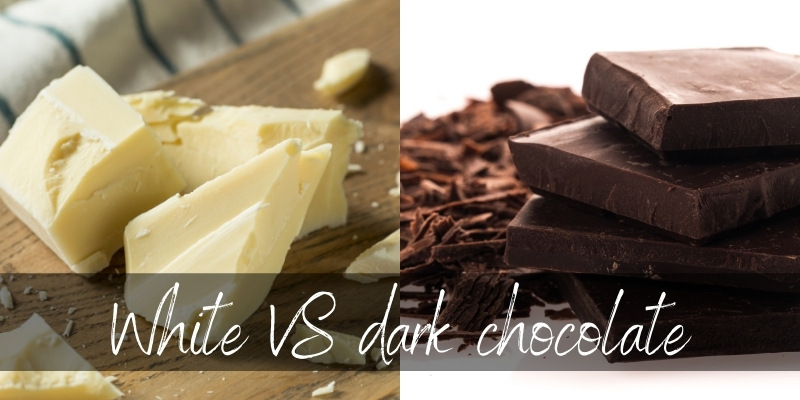 There are a few more differences but these are the main ones. Now we’ll take a look at what each of these chocolates is, how they’re made, and then compare the two.

What is white chocolate ?

White chocolate is a sort of faux chocolate, as it contains no cocoa solids at all. But it’s still called chocolate, to make things easier for everyone and because it has at least 20% cocoa butter.

It’s primarily made of cocoa butter, powdered milk, sugar, and vanilla extract. Cocoa butter is creamy white, so is powdered milk, and sugar is white. The result is an off-white chocolate bar that turns light yellow or cream when melted. The name white refers to it being lighter than milk chocolate, rather than actually white.

What is dark chocolate ?

Dark chocolate is pretty much the opposite of white chocolate. It’s got much more cocoa solids than milk chocolate, no milk at all, and just a bit of sugar. How much cocoa solids are in the bar determines how strong the cocoa flavor will be. It also makes the chocolate lean more towards the bitter side.

Make no mistake, getting used to dark chocolate is similar to getting used to black coffee. It’s bitter but also sweet, and once you get used to it you understand all the different notes in the chocolate.

We recommend sticking to 85% dark chocolate, anything past that can get overwhelming. Now let’s compare white and dark chocolate. 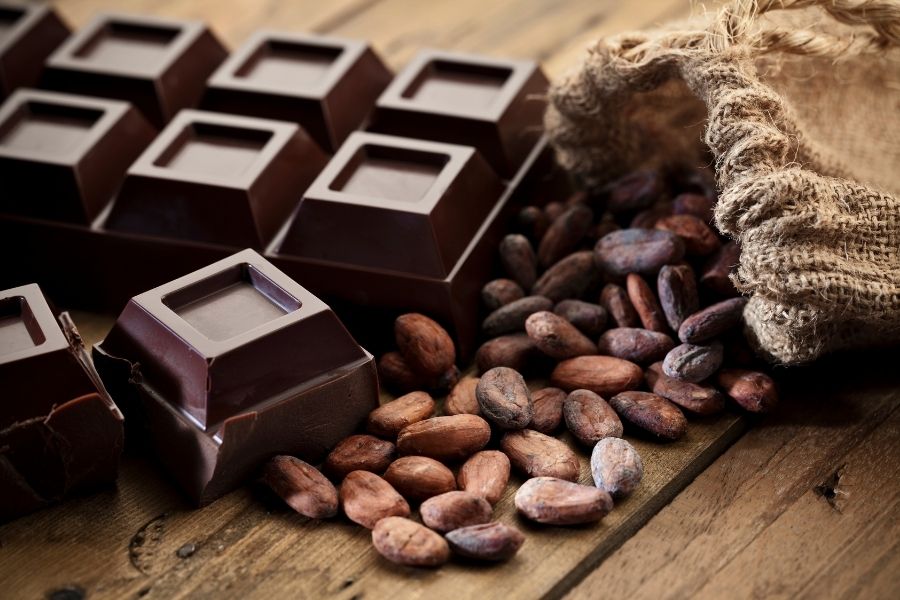 1. Dark chocolate has cocoa solids, white chocolate does not

Because dark chocolate has so much cocoa powder, it appears so damn dark, nearly black in some cases. White chocolate is a creamy white, because it has no cocoa powder at all.

This is a serious dividing point. You either love the extremes of white and dark chocolate, or you hate them, there’s no real middle ground. A point for dark chocolate is the fact that it tastes the most like chocolate. So if you’re starting off from milk chocolate, you can make your way slowly towards dark chocolate.

Look at the ingredients, or look for a label o the chocolate. Most milk chocolate is up to 35% dark, and dark chocolate usually has a label printed that says the cocoa percentage. So try your taste buds on progressively darker ones. Do not jump straight at 85% ! It’s hard to accept right after a nice, creamy milk chocolate.

Since white chocolate has no cocoa solids, it’s caffeine-free. Well, there are only trace amounts of caffeine in cocoa butter. The majority of caffeine and theobromine are present in cocoa powder.

Since dark chocolate has such a high cocoa powder percentage, this makes it much thicker when you melt it for ganache. So depending on what you’re planning on making – a glaze, a thick cream, some very runny drips on the side – dark chocolate is much easier to work with as a ganache.

Even a 1:1 cream to chocolate ratio might be a little thick if you’re using really dark 75% and up. You can always thin it down with more hot cream, but it’s not as easy to thicken it back up.

On the other hand white ganache is much harder to control, because it gets very runny. And since ganache is supposed to be made with cream, if you add any cream it will get even runnier. So the best option is to melt the white chocolate by itself, and heat a tiny bit of cream separately. Check the final viscosity and add more cream if you think you need it thinner.

Don’t overdo it though, a little cream goes a long way with white chocolate ! It works a bit better if you whip it, as it won’t need as much cream to fluff up.

4. White chocolate is high in sugar, dark is healthier

If you’re looking for a healthier alternative to milk chocolate, you should go for dark chocolate. Because it has the extra cocoa powder, it has the extra antioxidants and minerals, but also extra caffeine. Not as much as an espresso, but it’s there and you should keep it in mind if you’re allergic, or pregnant.

White chocolate has virtually zero caffeine, but a much, much higher sugar content. It’s legally up to 55% of a chocolate bar’s weight, though if you look on the nutritional table of different white chocolates you’ll notice it’s actually more than that. While white chocolate does have cocoa butter, it doesn’t have as many benefits as dark chocolate.

It sounds like a good idea but only in theory, If you were to really mix white and dark chocolate you’d end up with a thinned out chocolate flavor, since a good chunk of white chocolate is sugar. You’d need more powdered milk to make milk chocolate, and you need to temper the chocolate.

What you could so is make a marbled chocolate, or a two color one. It won’t taste like milk chocolate, but it will look great. And you can even use a combined drizzle of white and dark chocolate as a glaze on a cake.

And that’s about it for white and dark chocolate ! If you’re looking to switch to a healthier version from milk chocolate, go for dark chocolate. Work your way up because it takes some getting used to.

Conversely if you’re looking at which to use for your desserts, know that dark chocolate is much easier to work with. If you’ve got any other food curiosities be sure to check the related articles below, we’re always adding more food facts to make your life that much easier.