Have you ever made cake at home ? Then you know how delicious yet frustrating the results are. A wonderful flavor but an annoying dome in the middle of the cake. You often have to cut it off and basically throw away perfectly good cake.

But what causes domed cakes ? Is there a way to prevent them ? It turns out that yes, you can ! 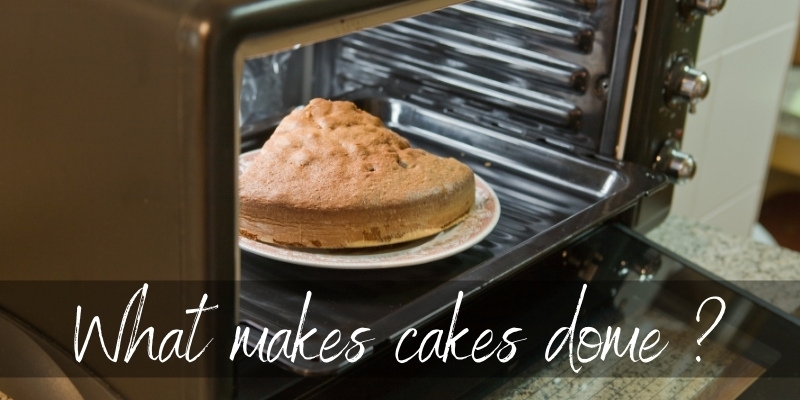 Table Of Content show
1 What causes domed cakes ?
2 Preventing a domed cake
2.1 Water bath
2.2 Cake strips
2.3 Low and slow
2.4 Always use a wide, shallow tin
3 How to fix a domed cake
4 Why do cakes burn on top ?
5 Why did my cake rise unevenly ?
6 Can I cover cake with foil while baking ?

Domes cakes form when the edges of the batter cook first, and the middle still needs to rise and cook through. This leads to the edges forming a thin crust and cooking faster, because they have direct heat from the sides of the pan.

The middle of the cake cooks slower, and it only has heat from the top because the sides and bottom are already cooked through and provide insulation.

So, a very thick cake batter (tall and wide) will likely burn at the edges before the middle will be cooked through. The cake domes because the tiny air bubbles inside the cake still rise until the top crust forms.

Domed cakes are so common it’s not even something people question anymore. Unless you’re getting more into baking and pastries, you don’t usually realize that cakes can be flat right out of the oven !

True, some vague doming will happen and the sides of the cake will pull away from the tin just a little. But it won’t be an obvious, round dome that will make layering a cake difficult. Keep in mind that cakes deflate a little while cooling down, so the final shape is not the one you see in the oven.

You can prevent a domed cake by changing what you bake in, or the way you bake your cake. True, most cake ends up domed despite your best efforts and following all the directions. But let’s see what we can do differently.

A water bath is probably the easiest and most reliable way to get your cake to rise evenly. This does two things. First, let’s explain what a water bath is. You need a pan large enough to hold the cake tin inside it. And it also needs to be tall enough that water will reach at least halfway up the cake tin.

Think of the way cheesecake is usually baked. It’s baked in a cake tin, surrounded by water in another pan. Whatever pan you use is fine, ad long as it can hold water.

So, what does a water bath do ? Here you go:

Note that this method only works if your water pan can get the water at least halfway up the cake tin. Please use extreme caution when handling the hot pans at the end. You risk sloshing burning water on your hands, use protective gloves that have a water-proof layer. Be very careful.

Cake strips are supposed to be a very quick and easy way of simulating what a water bath does, minus the extra moisture. We haven’t sued these ourselves, but they seem to work for others so we think they should be good. You can easily find the online, or make your own.

Cake strips are basically a thick cloth that is the length and width of your cake tin. They are secured with velcro or something similar that is heat-proof. You need to get them wet so they will keep the sides of the cake cool while the middle starts cooking.

Another option, if your oven allows this, is to go for a low and slow bake. Now, to go low enough you need to go lower than the recommended 180 C/350 F baking time. If you have a gas oven then this is very complicated, since it doesn’t really go lower than 180/350 realistically.

An electric oven can do this, and if you turn on the fan then the heat distribution is even better. This means you can bake at 140 C/275 F for an extra 10 minutes and have the cake go slower but more evenly, without a water bath or cake strips.

Always use a wide, shallow tin

This is not necessarily a method, but something we’ve noticed happens often. Cake tins are means to provide extra room for the cake to rise, but don’t overfill it. If your raw cake is halfway up the tine, it’s almost too much. It will double in size yes, but past a certain point it will be difficult to cook it evenly if you put in too much batter.

It’s best to use two thin tins and bake two separate cake layers than to make a thicker one that needs 3 cuts. This means you need to keep an eye on the cake, but it’s worth it.

How to fix a domed cake

Alright, you got a domed cake, now how do you save it ? Well the only thing you can do is to trip off that dome with a serrated knife. Pick the height you want, and don’t cut straight into it. Make sure your knife is horizontal with the top of the cake and the table, so you get a nice horizontal top.

Roll the cake while scoring the side of the cake, to make a sort of mark where you want to cut. Once you’re happy with the level, start cutting the cake horizontally, all the while rolling it. Otherwise you risk cutting at an angle and you’ll have a wonky cake. It takes time, yes, but by the time you get to the middle the cake should be somewhat even.

If your cake is domed and still raw, you can place a loose tinfoil on top. This will prevent the edges from browning, and will help trap more moisture and distribute heat more evenly across all the cake. It will still dome, but not as much.

Why do cakes burn on top ?

Cakes burn on top because the heat is too high, the sides are already done and the center has risen so much it’s not starting to burn. IF your top is burning you’re likely close to the cake drying out. Check that your broiler isn’t on. 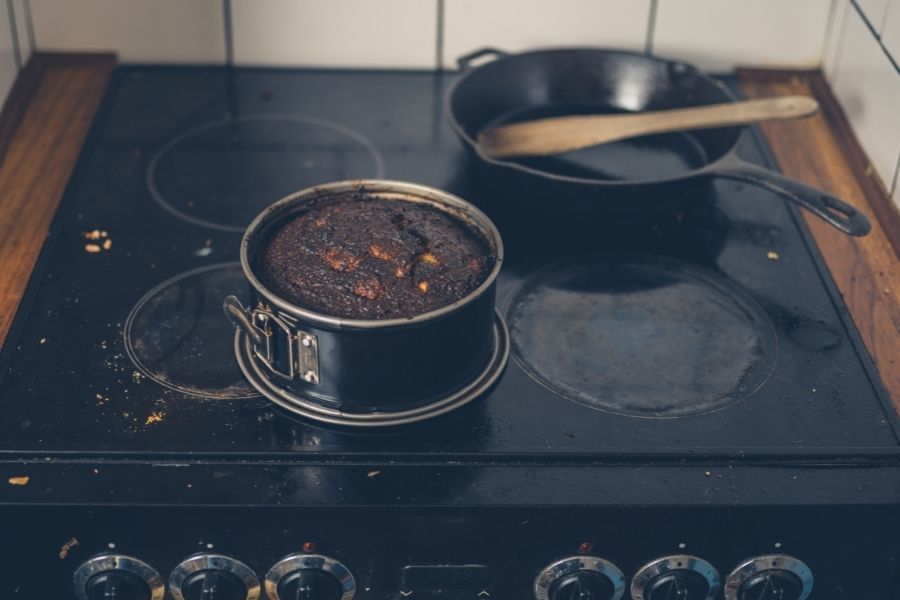 If you’re making a Basque cheesecake this is actually the point. It’s the kind of cheesecake that counts on the sides and top burning to a nice caramel color.

To save your cake from burning on top in the future, try using tinfoil on the top – like a loose tent – to distribute heat evenly and keep some moisture.

Why did my cake rise unevenly ?

Uneven rising in cake is due to two factors: poor mixing of ingredients, and uneven heat distribution in your oven. We think you’re very unlikely to undermix your cake to the point where the baking soda or egg whites are poorly distributed.

Unless you’re attempting a marbled cake that has a significant difference between the two batters. For example cocoa-heavy batters will rise less than plain white, vanilla batter as cocoa is heavier and does not form the same bonds flour does. Hence, it cannot rise as high and get as fluffy.

But even in those cases the difference is not significant, and will usually not result in a domed side and a flat side. No, the problem is usually with the oven. It could be the door insulation, a blocked side, or maybe the fire burns hotter on one side.

If you’re using an older range, it’s likely on gas. And it’s almost always going to have a hotter side, possibly the back. It’s alright, you simply need to turn the cake once you notice it rising on one side. Be quick, because the difference in temperature from opening the door can alter the cake shape.

Can I cover cake with foil while baking ?

Yes, you can cover the sides of the cake tin in a thick foil to try and do what the cake strips do. However you should not cover the top of the cake from the beginning. If you do this you trap too much moisture and the cake can’t form its crust on the top. Instead, add the foil loosely, and only halfway through, or in the last 10-15 minutes depending on your baking time.

We hope you’ll get as few domed cakes as possible, especially now that you know what to do to avoid such a thing from happening. If you’re baking cupcakes know that this can happen as well.