Do you love fried rice ? Because we do ! And we love how absolutely easy it is to make it suit your particular food style and life choices. But is fried rice vegan ? We know it can be vegetarian, but what about vegan ?

Let’s take a look, because fried rice is a delicious comfort food beloved by many, including vegans. It’s be heartbreaking to know one of your favorite takeout dishes is not vegan. Let’s clear this up. 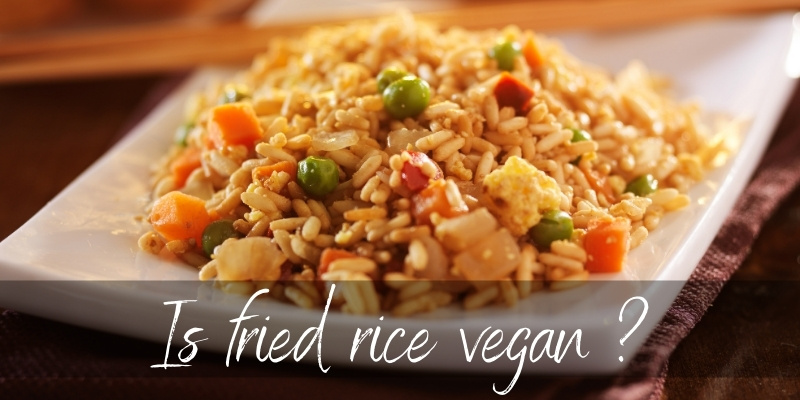 Table Of Content show
1 Is fried rice vegan ?
1.1 Plain steamed rice is used in fried rice
1.2 Does fried rice contain eggs ?
2 Fried rice is a way to use leftovers
3 Many establishments have vegan and vegetarian options

Traditional fried rice is not vegan as it has eggs and meat in it, but you can easily find just rice and vegetable versions that are meant to be used as side-dishes. Or you can make it vegan if you make it at home. Like omelettes and pizza, fried rice is really a great way to use leftover food. Meaning you can easily make or find vegan fried rice.

If the fried rice your local Chinese takeout sells has no eggs or meat, then it’s absolutely safe. Normally the ingredients in fried rice are rice, oil, soy sauce, peas, carrots, meat and eggs. Once eggs and meat are removed from the recipe it becomes a vegan recipe. And despite soy sauce smelling vaguely fishy there is no actual fish in it, so it’s vegan as well.

We’ve heard somewhere about the rice being possibly steamed in broth, be it chicken or beef to make it more flavorful. To be honest, this is not traditional nor it is widely done. Fried rice is amazing because it uses leftover rice, day-old rice.

The old, really old, version of fried rice from China did sometimes use lard instead of oil, depending on what was available at the time. Lard is almost never used nowadays, and if used it is stated on the food label.

If you’ve ever seen the rice in any Chinese restaurant you know it’s plain white rice, otherwise it would compete with the many flavors in the other foods. And no, it’s not basmati or jasmine rice as those are not sticky when steamed.

So no, fried rice doesn’t normally use anything other than plain, white, non-flavored rice. It’s the rice that didn’t get used the day before. Why ? Because if you’d cook a fresh batch of rice and then use it for fried rice, it would be too soft and it would crumble. The rice needs to dry out a little and clump together, so you get a nice mix of soy and not-soy.

There may be establishments where animal broth is used for the sauces, to boost flavor. But never on the rice itself. If you’re unsure ask the waiter or whomever is handling orders, they can ask in the kitchen for you.

Yes, fried rice does normally contain eggs. You can easily find versions without egg, but it’s usually there for extra protein and to be more filling. Remember, fried rice is a way to use leftovers. Meaning there won’t be much of one ingredient, but a medley of several foods or ingredients. 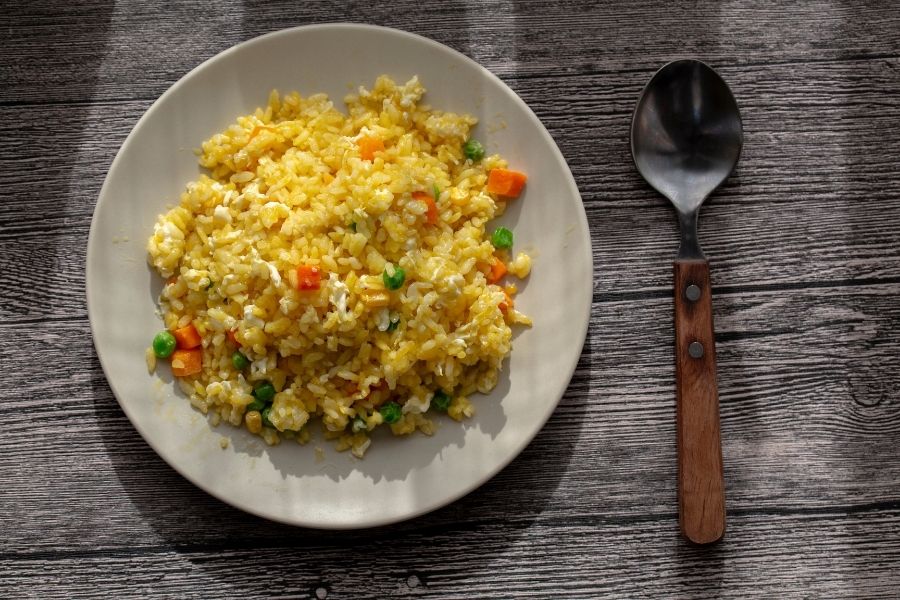 Kind of like when you’d make a pizza because you have no way of combining olives, arugula, and pesto. Okay that doesn’t sound so bad, it might actually be an interesting pizza.

Oh and if you’re wondering if your particular fried rice has egg – the one you’re holding – if you can’t see the egg it’s not there. The only way the egg is added is by cooking it in an omelette, which is shredded into ribbons and mixed into the rice.

Fried rice is a way to use leftovers

Since fried rice is a way of using whatever’s left in the fridge, it means you can turn it into absolutely anything you like. Back when fried rice became a staple of Chinese food, it didn’t really have a specific ingredient lift. It used rice and whatever was left from the day before, usually some meat and vegetable.

As for what kind of meat, it doesn’t truly matter. What matters is that you can easily make vegan fried rice at home. As long as you’ve got day-old rice that’s been in the fridge, soy sauce, and some veggies you’re good to go.

Fried rice is yours to make just the way you like it !

Read Also: Why Is My Fried Rice Mushy ?

Many establishments have vegan and vegetarian options

Vegan food and drink is become more and more common, so many restaurants will have a few vegan options. They may cook in smaller batches and you have a higher chance of finding these dishes in more Western countries.

When looking at the menu there should usually be some signs next to the dish type, stating that it is vegan, vegetarian, or contains meat. Again, if you’re unsure you should check the ingredients, they should be listed under each dish name. And if the ingredients are not listed, ask the waiter.

In short no, traditional fried rice is not vegan. But many establishments sell a very simple version consisting only of rice and veggies and it’s meant as a side-dish rather than a main course. The original fried rice was a full meal, consisting of any leftover from the day before. Nowadays it’s become more of a comfort food, and it has many variations.