Do you love fried rice ? Most often it’s the only way to use leftover rice, and most folks have picked up the habit of making fried rice whenever they have some leftovers. Which is great, because it’s one of the most convenient foods out there.

But why is fried rice yellow ? Maybe not the home made kind, but the restaurant or takeout fried rice is often yellow or has a serious yellow tinge. Why is that ? Let’s find out. 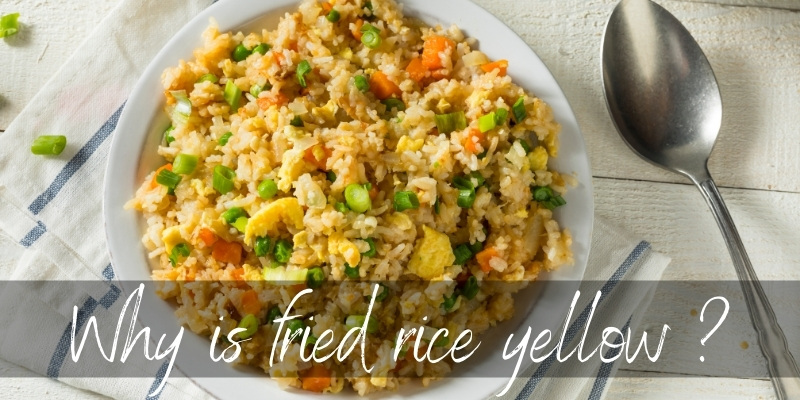 Why is fried rice yellow ?

Fried rice is yellow due to additives like turmeric, a thinned out soy sauce, or beta-carotene heavy vegetables like carrots and red bell pepper. This rice dish is a way to incorporate a lot of leftovers, so other ingredients often stain the rice.

It could also be that fried rice has a yellow hue as a derivate of the delicious caramel or golden-brown hue most baked or fried goods have. Truly fried rice has a nice crisp edge, and the overall effect may turn it a little golden. Most of the time though fried rice is only made to look golden or yellow, without it actually being slightly crispy.

Turmeric is probably the most common ingredient in fried rice, at least in America. It’s a root (like ginger) but it’s incredibly yellow, and it stains everything bright yellow. Just a pinch doesn’t have that much flavor, but if you add a lot it has its own flavor that you can notice. 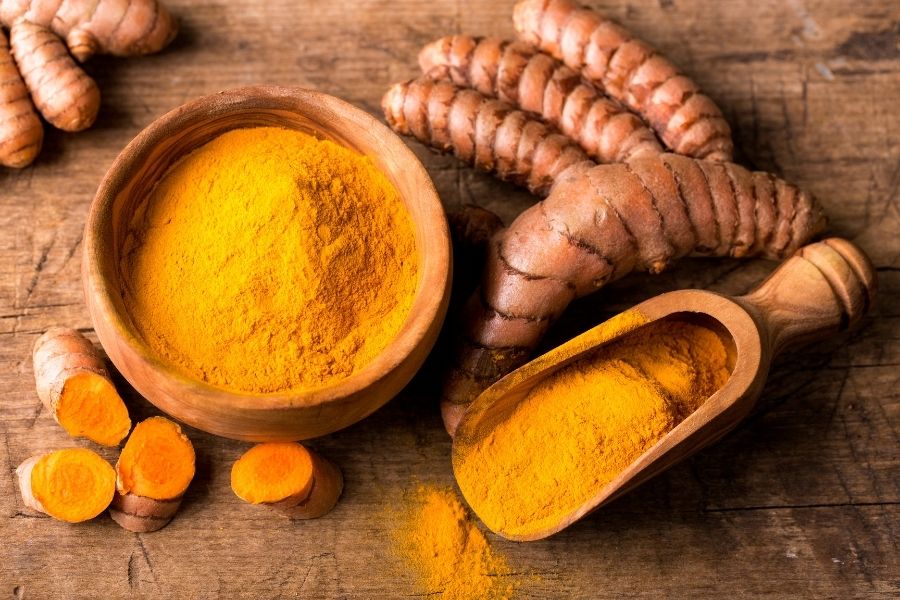 Does turmeric actually do anything for the fried rice ? In our opinion no, it doesn’t do anything except add color. In some cases it’s a trick to make people think saffron was added to the rice when, in fact, the hues from saffron and turmeric are different.

True saffron will give you a warm yellow, with an orange hue and a distinctly golden look. Turmeric gives you a brighter, flat yellow that is much stronger than whatever color saffron can give you.

Another possibility your fried rice came out yellow is the addition or a thinned out soy sauce. Now, soy sauce thins out into a murky brown, that’s true. But in some lights it can look yellowish.

The most likely culprit, aside from turmeric, is the addition of orange-red vegetables. These contain beta-carotene, a natural pigment found in many vegetables. You see it in tomatoes, red peppers (hot or sweet), carrots, even corn. If it’s an orange or yellow-based red, it’s got a lot of beta-carotene and this will stain your food.

Further diluted and mixed with fried rice, it turns a nice shade of warm yellow. And have you ever noticed how fried rice always has a veggie mix thrown in there ? And do you remember what those veggies are ? They’re almost always a combination of peas, carrots, mushrooms, and sometimes corn.

So there you go. The veggies you use are going to make your food a certain hue. It could be the veggies, a bit of soy sauce, and a pinch of turmeric. The point is that fried rice s never white, as it’s meant to be fried with some soy sauce.

You may have see some really dark looking fried rice. We’ve seen those too and at first thought it’s a sign that the soy sauce was really good. Have you ever noticed how takeout and food court Asian food has the darkest colored food ? It makes whatever soy sauce you have at home look thin and watery.

But it’s rarely the soy sauce’s fault. Often there’s a lot of coloring added to the food, to make it more appealing and to mimic a stronger soy sauce.

Back to fried rice, a distinctly brown soy sauce is not necessarily better. It could even be worse, depending on the locale. Soy sauce has this amazing ability of masking many other flavors and colors. So if the rice ever come out wrong, you can easily stain it with soy sauce. It will be salty, flavorful, and deeply colored so there’s no real way to tell if it’s poorly made.

What color should fried rice be ?

True fried rice cannot be white, otherwise it’s just steamed rice with vegetables. Through extra cooking it gets that nice golden hue. How deep should that hue be ? It depends on how long you fry the rice, what ingredients you’re using, and how much soy sauce you’ve added.

It should never look in-you-face yellow, and when it does there should  be a label stating the ingredients. You cannot reproduce that color at home without turmeric, saffron, paprika, or something similar.

So don’t worry if your takeout fried rice is yellow. There’s nothing wrong with it, it’s just an ingredient that has much more pigment like the ones we’ve just talked about. And if you’re trying to make it at home and doesn’t turn out yellow, its fine. As long as it tastes the way you want it to, the actual color is really not that important.

A word of caution: always use cold, day-old rice that’s been kept in the fridge. Fresh rice won’t crisp up and still has more moisture than you’d like. If using basmati know that it may break up while you’re frying. If you want it to keep its shape go for Japanese rice (the one for sushi) or try jasmine rice (Thai).