Seafood isn’t for everyone’s tastes, but when it’s cooked properly it’s one of the best things you’ll ever experience.

So you sit down, pull up the menu and gasp a little. It’s a bit much for the lobster, and the mussel pasta is a bit extreme.

Why is that ? Why is seafood so expensive ?

After all, fish and sea faring creatures have lots of room to live in (seas and oceans), so there would be plenty of them, no ?

Well, the truth is actually different from when we might imagine. Seafood is actually in very high demand, and overfishing is a real threat in some areas and to some fish species.

First though, let’s take a look at what seafood is, because it’s such a wide umbrella term it can and does mean a lot of things. 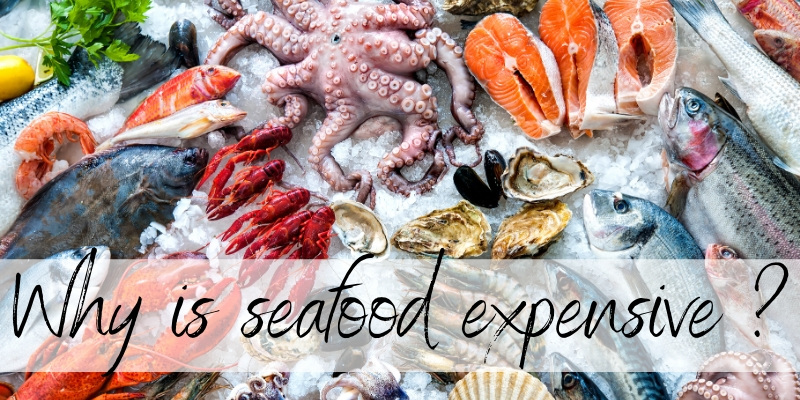 Table Of Content show
1 What is the main reason seafood is expensive?
2 What is seafood ?
2.1 Wild vs farmed seafood
3 Main reasons seafood is so expensive
3.1 1. Logistics – getting seafood from point A to B
3.2 2. Demand – More and more people ask for seafood
3.2.1 Some cultures are in love with seafood
3.2.2 Seafood is thought of as the cool, expensive option
3.3 3. Expensive catches, or difficult to cook
4 Is seafood sustainable ?

What is the main reason seafood is expensive?

The main reason seafood is expensive is the demand that is continuously growing for different reasons, among them being the health benefits of seafood, most of them work well when you are dieting. Also, their fanciness helps a lot since almost any seafood can be marketed as a luxury food in many countries.
So this is the main reason, the demand exceeds the supply, which is the case for most of the expensive foods, but there are other good reasons for seafood to be expensive that we will discuss later in this article after we clarify what seafood really is.

Seafood is a wide category that includes every creature that lived underwater, and is edible for humans. This includes:

Sea mammals like dolphins,sharks, whales, and seals are not commonly eaten or regarded as seafood anymore, but they used to be included on the list in older times.

Some cultures still consume those animals as seafood, though the practice is very limited.

Seafood does no include seaweed or any other plant that grows under water and is edible for humans.

Read Also:What Is Surimi Made Of ?

There are two kinds of seafood, farmed and wild.

Traditionally seafood was wild, with humans having to go and fish or hunt in the water for food. Over time fish farms became easier to build and maintain, and farmed fish became much more common.

The same goes for other seafood, like farmed or wild shrimp, or lobster, or oysters.

Wild seafood gets more exercise since it has a lot of room to swim and roam the seafloor. This often makes for a better meat in terms of flavor, as well as the fact that its food source is natural.

Farmed seafood is often cramped, and fed food that may sometimes be artificial and only geared towards sustenance, affecting the final flavor of the meat.

The only problem with wild seafood is that it’s not very well regulated, and international borders over waters are very tricky. Also the sea critters are con confides to one small space, instead they have a wide territory that may span several borders, and things get legally complicated.

In short, wild seafood is better tasting, but much more expensive and complicated to deal with in terms of paperwork. But the list for why seafood is expensive is much longer. This was just to put everything into context. 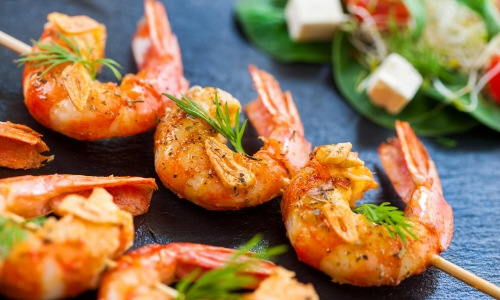 Main reasons seafood is so expensive

The reasons seafood is so expensive are very much tied together. Explaining one means you need to understand the others, and for that we need to remember one very important thing.

Seafood is a thing only because we humans turned to the seas, rivers and ponds to find food when we couldn’t find any on the land. It started out as survival, especially in areas that are surrounded by water.

Over time seafood became traditional, and as tourism grew it became something of an exotic food was well, that Westerners weren’t very familiar with and wanted to experience more.

This led to the growth of the seafood and fishing industry.

1. Logistics – getting seafood from point A to B

The first and possibly largest reason seafood is so expensive is getting the catches from one place to another, while still fresh.

The best way to do it is to deliver seafood alive and unharmed. However this is very difficult, since often it needs to be transported in water, and this becomes hard to do at high speeds (like with planes).

Another way is to fish the food and put it on ice and ship it to a big supermarket immediately.

This is usually the case in countries where only one side has the sea, and the other part of the land needs seafood as well.

Seafood may come from rivers as well, but the problem is the same: getting it fresh and unspoiled from the harvesting point to the end consumer. 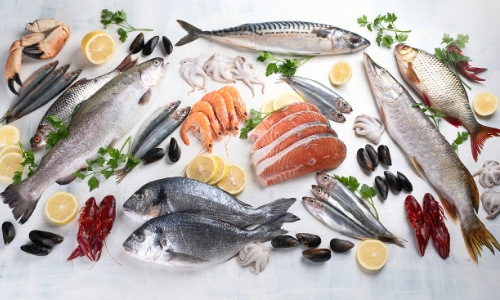 This is why freshness is such a big part of seafood price. Flavor changes drastically within 24 hours, and stale fish is infamous for being unbearable.

So that’s one thing to think about when ordering a seafood platter. It was most likely caught that very morning, and rushed to your local supermarket or restaurant.

Another important point in this is the people who are actively scouring the waters for seafood. These fishermen need to be very well trained for a few reasons:

These people require training, time, boats and sips to go out looking for seafood, and everything needs to be done literally overnight, so it can reach the shelves by morning.

That costs times, money, gas, and the manual labor involved.

Another reason, just as important as the logistics, is that more and more people have turned to seafood over the past decades.

This led to a rise in wild harvesting, as well as a growth in the number of seafood farms. About half the seafood you find in markets and supermarkets is fresh, and half of it is wild caught.

There’s two ways to explain the high demand for seafood, and here they are.

Some cultures are in love with seafood

The world is not made equal, and some countries are surrounded by water, like Italy, Spain, Greece, Cyprus (to name a few) and there you will always find much more seafood recipes that have been considered traditional, than in other places. 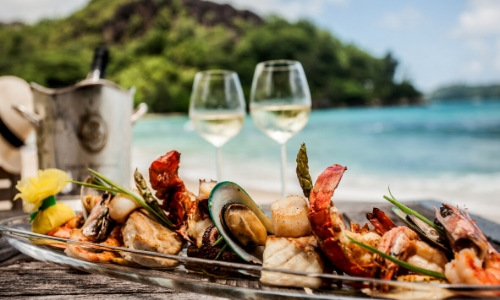 The same is true for small island groups, Or Japan, Korea, seaside China, and pretty much the entirely of South and East Asia.

Think about sushi, and why it has fish and shrimp as its meat, instead of other animals.

Because of tradition, and because most often traditional foods are the most flavorful, seafood has remained a big part of the everyday lives of folks who live by a big body of water.

Food is simply easier for find, so they will cook what they have on hand.

Pair this with tourism and folks visiting such places, falling in love with the cuisine and then replicating the recipes at home where they need to actively look for fish, and you’ve got a spike in demand.

Seafood is thought of as the cool, expensive option

As a sort of continuation of the latter part, seafood has always been regarded (in the West at least) as kind of exotic and vaguely alien. This is in contrast with the mundane livestock that folks usually have.

Fine dining establishments usually feature some form of seafood on their menus, for several reasons. Seafood is difficult to get right, so it’s a sign of a very well trained chef.

Seafood is also a sort of delicacy in some parts of the world, being eaten only on special occasions.

And finally, it’s simply the novelty of a dish that looks an tastes very different, and is on the expensive side.

These all fetch a higher price, in conjunction with the high price of fresh seafood that’s been caught that morning.

In short, seafood is the hip thing to order from the menu, and as such it has a higher price tag.

3. Expensive catches, or difficult to cook

Seafood is a wide category and some of the sea critters on the menu may be just hard to deal with.

Some require a lot of skill and training to cook – like the puffer fish in Japan. It’s poisonous, deadly even. The cooks are only allowed to prepare the fish for others after they’ve cooked it for themselves first.

Other types of seafood, like octopus or calamari are really delicate and need exceptional balance between high heat, short cooking time, and also to not burn to a crisp. 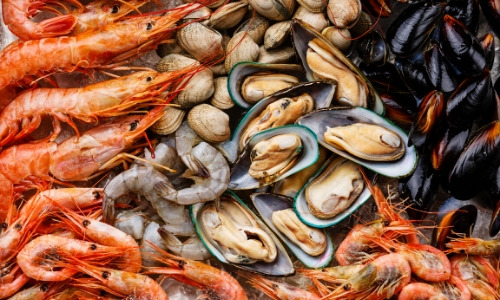 Otherwise they get gummy and chewy and simply bog down your evening.

Another example is tuna. It’s a very strong fish, and it’s very expensive on its own due to how much folks love it.

Still it needs to be cooked delicately, just like beef or duck breast. If it’s pink-red on the inside, it’s alright. Overcooking it can lead to a grey, unappetizing chunk of meat.

Depending on what you’re eating, that particular seafood may require a lot of skill and time to be brought to your home. Either it’s been caught very far into the sea and thus logistics are pricey, or it’s been prepared by a very skilled chef so it tastes just right.

Or, maybe both and this probably means you’re eating caviar, lobster, or sea cucumber soup.

Read Also:Why Is Paella So Expensive?

Seafood is often very poorly treated, in that overfishing is a real concern and the damage to the ecosystem is just as real.

Both wild and farmed seafood is often farmed more than it can reproduce, and this way we get depleted stocks. Salmon is one such example, with Norwegian salmon being poached often enough that their numbers are dwindling.

Thankfully some regulations are in place, starting in the 1990s. You can look for labels from Marine Stewardship Council (MSC), a blue label with a drawing of a fish.

The MSC approved fisheries gain a larger profit for their harvest, which allows them to better their fisheries and not overfish for more profit.

You may also look for another label from Aquaculture Stewardship Council, which promote sustainable aquaculture.

So in short, seafood is not entirely sustainable. But like with cocoa and coffee farms, steps are being taken and there has been some progress along the years to balance the impact farming has on the ecosystem.