If you’re any sort of dessert lover, you’ve definitely has both whipped cream and buttercream. But you may not have made either of them at home, and you may not have been faced with the decision of which to ice and entire cake with. Or maybe just some cupcakes, the decision is still something to think about.

So this is what we’ll be discussing today. The pros and cons of buttercream and whipped cream, so you can figure out which would work best for your cake. Let’s take a look. 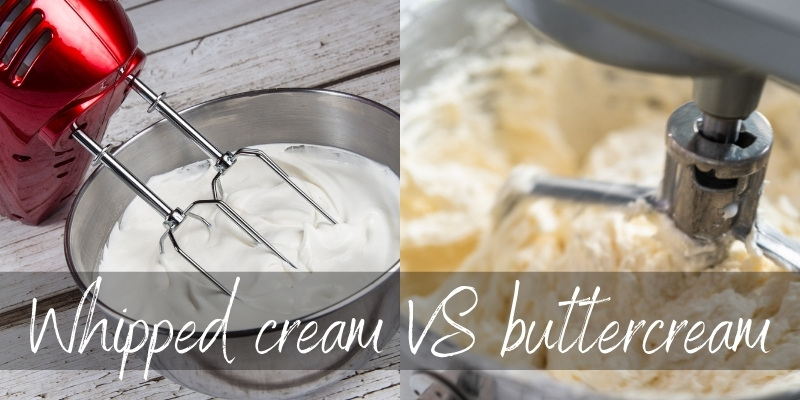 Whipped cream is much lighter in texture than buttercream, which makes it a poor choice both for filling and decorating a cake. Buttercream has a sturdier structure and the potential for more flavor, because it has such a high amount of milkfat. Buttercream is also much easier to color and flavor than whipped cream, and this is an important part of any cake frosting or icing.

On the other hand, whipped cream is so light and airy it can make any dessert look beautiful and not be overwhelming. Whipped cream is better as frosting on cupcakes, if very well stabilized, rather than for a cake.

Now let’s take a look at exactly what buttercream and whipped cream are, and then discuss the finer points.

Buttercream is a very common filling and frosting for cakes, cupcakes, and almost all desserts. It’s made by creaming fats (usually butter) with powdered sugar until the mixture is stable, fluffy, and a pale creamy yellow in color.

In truth, there are two main versions of buttercream, both very sturdy but require different skill.

American buttercream is the easiest version and you can find it in many home-made desserts. It is simply soft, unsalted butter, powdered sugar, and various flavorings or colorings added for effect. The sugar often doesn’t fully melt into the butter, so the texture ends up grainy sometimes, and it can look a bit dry.

However this makes it very, very sturdy as a frosting, just make sure to moisten the cake beforehand.

Swiss Meringue buttercream is the upgraded version. You need a steam bath, to warm both the raw egg whites and sugar and whip them as they heat up. Add in the butter after the meringue has cooled, whip it again to fold in the butter. Sally has a great recipe right here.

This kind of buttercream sounds scary to make and it does require you to really pay attention to what you’re doing, But it’s well worth the effort. This is the buttercream most cakes have. 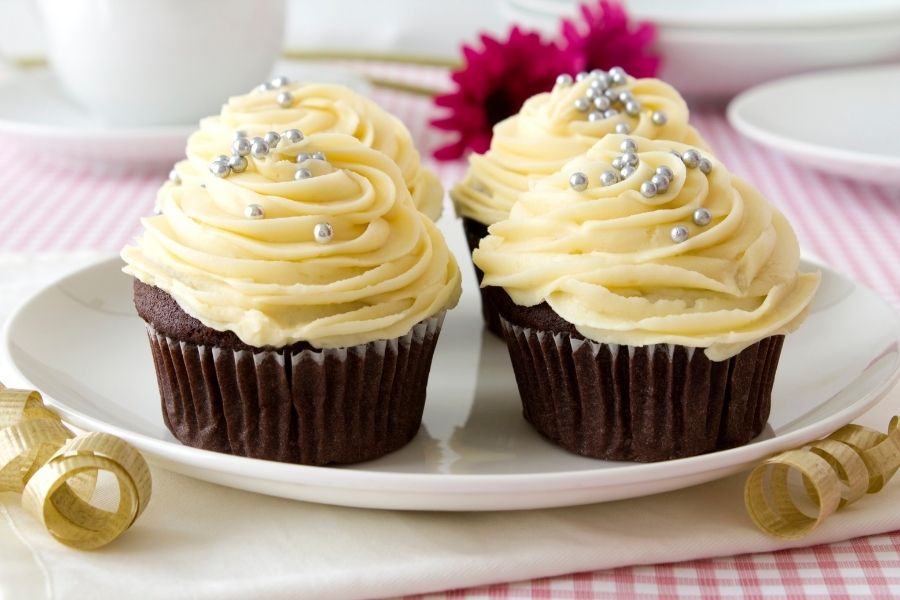 What is whipped cream ?

Whipped cream is simply heavy cream (may be sweetened or flavored) that has been whipped to stiff peaks. It looks a lot like French meringue, only it has no egg whites, it’s just heavy cream.

By comparison with buttercream it’s a very light and airy affair, and all those tiny air bubbles are very easy to knock out. Because of this, whipped cream is not considered a very stable product, and may sometimes contains stabilizers or thickeners.

In terms of flavor, whipped cream is considerably milder and lighter than even the most basic buttercream. Not let’s compare their main points, see which works best for your cake.

1. Whipped cream does not freeze well

If your cake is fairly large and will likely turn into leftovers, it may end up in the freezer. So, whipped cream is not the best idea. It tends to dry out and crack in the freezer, so buttercream is definitely a better choice.

This means your buttercream will become incredibly tough and dense in the freezer, but this will also make your cake unbreakable if you ever drop it.

If you’re planning to flavor the frosting with something, buttercream is a better choice. This is because fats (like the butter in buttercream) are amazing at grabbing and distributing flavor. Whipped cream is much lighter so any flavor it would have, it’d have less impact than buttercream.

3. Whipped cream can be made entirely white

Which brings us to the third point: color. If color matters in your cake and you need a very specific tone, buttercream will be a bit of a hindrance. It comes with a yellow tint, and this will translate into any color your try and make.

Blue will be a warmer, greenish hue. Reds will look amazing though, as will any warm color. You risk having to make a dark color to get it right.

Whichever you use – buttercream or whipped cream – be sure to use gel food coloring. If you use powder or liquid, it can really mess with the texture of your frosting.

You can tone down the yellow in buttercream

You can remove a portion of the yellow hue. Just like with blondes, a bit of purple helps tone down the yellow notes. It won’t be white ! It will be a light grey-silver, and it will work great as a base for very cool colors like blue and green.

To add that purple, you have to be very careful to only add a tiny amount. Whatever’s left on a toothpick is likely enough to mask some of that yellow.

Which is best for icing ?

Buttercream is by far the best option for icing and frosting a cake, and filling it as well. This cream is sturdy enough to hold its own between layers of cake, and it’s a great way to dress a cake as well.

Yes, whipped buttercream is stable, mostly because of the high amount of milkfat in it. This makes the tiny air bubbles hold together and makes it harder to knock them out. If the cake ever ends up in the fridge, the buttercream can last for up to an entire week !

it will be very soft and fluffy at room temperature though, so mind how much you keep it on the counter.

Can I decorate cake with whipped cream ?

You need to work with very cold utensils and the cake must be thoroughly chilled as well. And even then, we don’t recommend going for overly complicated or complex swirls. Stick to simple piped flowers or patterns.