Did you just get a pound of the loveliest looking apples you’ve ever seen ? Well then, go ahead and wash one, let’s see just how delicious it is ! Oh, it’s sticky ? Hmm…

You know, you’re not the first and probably not the last to be confused as to why your apples are sticky, and what you can do about them. After all, when you’re really craving an apple a sticky, greasy surface is the last thing you want. So let’s see why apples are sticky. 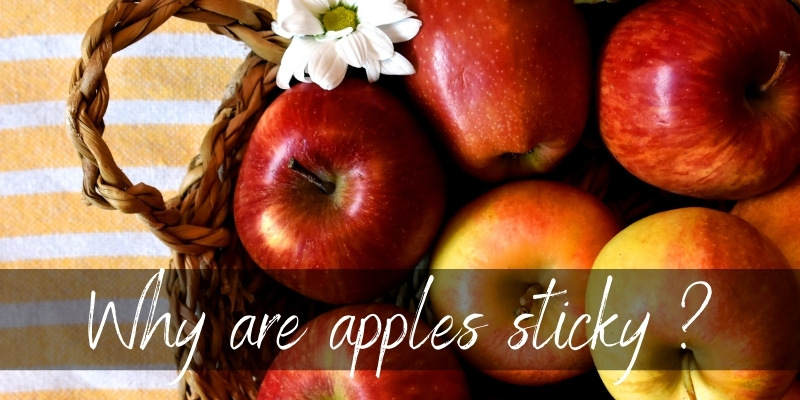 Table Of Content show
1 Why are apples sticky ?
1.1 Some apples produce more wax than other
1.2 In some cases food grade wax is applied
2 Can you eat waxed apples ?
3 How to remove wax from apples

Why are apples sticky ?

Apples are sticky because they have a thin coat of wax on them, natural or synthetic. All apples produce a certain amount of wax in their outer skin, with some producing more and some producing less. Aside from that, apples are often coated with synthetic, edible wax before being sold.

The end result is the same: the apple does not lose moisture, survives transport much better, and looks shiny. Shiny apples have been noticed to sell much better than non-shiny apples.

Some apples produce more wax than other

And no, wax isn’t restricted to bees because several fruits produce a lighter form of wax within their skin. This helps repel water, meaning it can keep the moisture inside the apple and if the apple were to stay in a damp place, it would survive. It also means bugs have a harder time scuttering all over the apple or burrowing into it.

Not all apples produce the same amount of wax, and not only apples produce wax. According to Postharvest.tfrec.wsu.edu the fine, powdery substance on plums is also a type of wax. The same goes for pears, even blueberries, and other fruits.

This is because the wax on fruits isn’t like a layer of wax that we humans can see with the naked eye. Sometimes it’s a very fine, smooth layer, Sometimes it’s very thin and fine wax ‘crystals’ standing upright, like you can see on plums.

In some cases food grade wax is applied

As mentioned before, not all apples produce the same amount of wax. For long distance transport and long term storage, this poses a problem. If the apples go bad, then they can’t be shipped and sold in the whole nation.

So some producers was all the apples thoroughly, regardless of how much wax they’ve got naturally. They remove the natural wax, and apply a thin coat of synthetic wax, edible, that will protect the apple from moisture loss.

This is done to standardize all the apples form one producer and increase profit by successfully selling all the picked apples.

The applied wax is usually one of three types. There is storage wax, which is better for long term storage and long transport. Then there’s pack-out wax, a lighter coating that is only meant to protect until the apples are sold and can easily be removed. And then there is high-shine wax, which makes the apples extra shiny and more likely to be picked by customers.

Again, no all producers do this. Some countries have a higher percentage of waxed apples, some lower.

Can you eat waxed apples ?

Yes, the wax on apples is harmless and will not prove toxic. It may be unpleasant to the touch and you may not feel comfortable knowing you’re eating a waxed apple, we understand that.

In those cases, you can try removing the wax at home. Here’s a few ideas you can try.

Read Also: Should You Refrigerate Apples?

How to remove wax from apples

There are a few ways to remove wax, and a bonus one for the extreme folks. So the first idea is to simply wash the apples in very hot water. The hot water will melt the wax away and you should be left with an apple that is was free. This may work with some apples better than others. 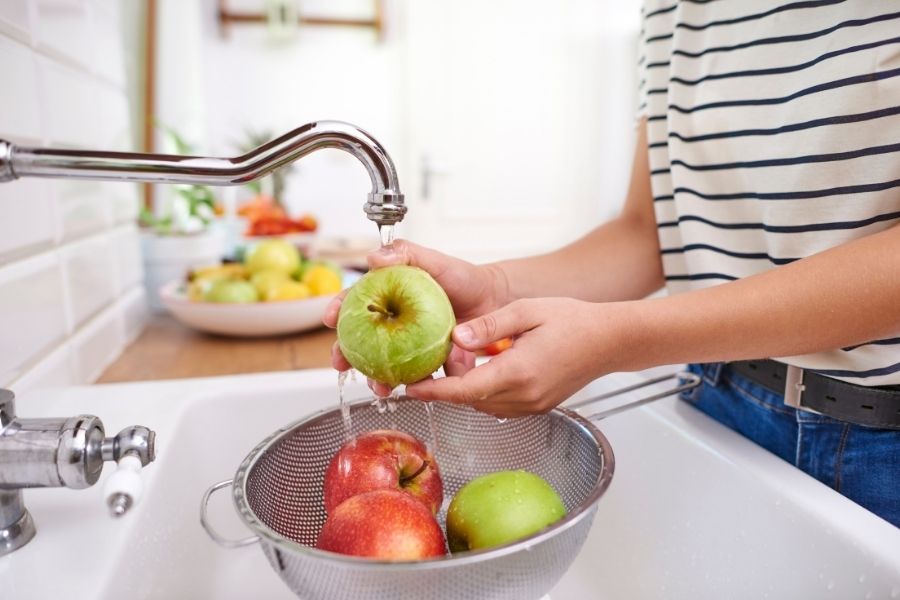 Another idea is to scrub the apple with a mixture of lemon juice, baking soda, and hot water, to remove the layer of wax. You will need something like a toothbrush or veggie scrub to make sure you get right in there and scrub it all off. Rise under running water.

If none of the above work and you have an extremely sticky apple, you can try a more extreme approach. You could always just peel the apple. Really, if no method of cleaning the outer skin works for you, then maybe removing the skin altogether would be better. This way you’re sure there’s no wax on the apple.

In fact, if you’re making something like an apple pie or jelly then removing the skins might be a good idea anyway. It’s much easier to work with that way.