Summer is just a couple of months away, and we’re getting mentally prepared for all the sunshine and fruit and pool time we can get, especially after such a long break. One fruit that pops into our heads when we think of summer is cherry. In our opinions cherries go with almost anything, bring a flavor that’s very hard to match, and they’ve got one of the most beautiful shades of red.

But why are cherries red ? How is their red different from other fruits ? And why are Maraschino cherries so bright red ? All this and more, coming right up.

Why are cherries red ?

Cherries are red because they contain anthocyanin, a natural pigment that is also an antioxidant. Anthocyanin goes from red to blue on the color spectrum, and in cherries it is red because these are very acidic fruits. Some cherry types have a stronger concentration of pigment, like tart cherries (dark red), while other cherries have a lighter pigment concentration.

But some have a lighter red, more like a bright red, such as the Sweetheart cherry cultivar. Others may have a dappled, blushing look, like the Early Robin and Radiance Pearl. Even lighter are Rainier cherries, mostly yellowish-pink with a light red blush here and there.

A word on Maraschino cherries

If you’re wondering where a Maraschino cherry gets that bright red from, well, they’re dyed. It’s edible dye, made from food coloring, but it’s still not their original color.

Actually the original Maraschino cherry looked like any other cherry – deep, dark red. It was preserved in jars with alcohol, and used in various cocktails due to its great flavor. But they were kind of expensive, had to be imported, and then the Prohibition era hit. The cherries were now illegal.

So, a home-made version that could preserve then without alcohol was invented, but it leeched a lot of color. They were dyed red and sweetened, and were the only choice similar to the true Maraschino.

And that’s how you ended up with a bright red cherry on your sundae. 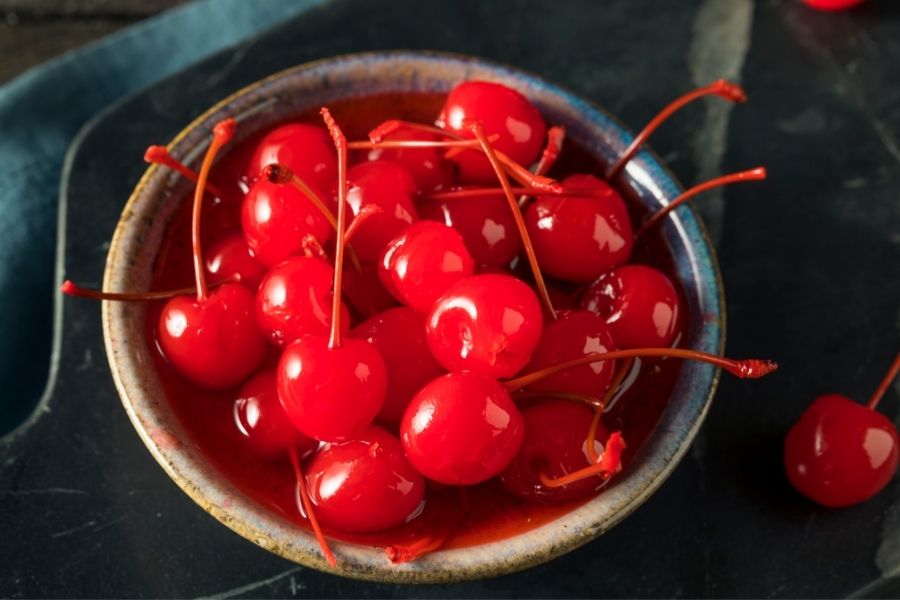 How to fake a cherry color

A cherry color is fairly easy to fake, and you can go about it several ways. One thing we have to clarify is the exact color and shade. There are many kinds of red, and cherry is a specific red. Since it’s an anthocyanin red, it has the slightest blue tint to it. It doesn’t lean into purple, so something like blueberry juice won’t do.

We’re going to help you tint liquids, drinks, creams, and puddings with these color options. Some of them may impart a small amount of flavor into your food.

Beetroot has a purplish tinge to it, but it’s one of the best and most heavily pigmented foods you can use to get a color similar to cherry juice. Keep in mind that beetroot brings an earthy flavor with it, but it won’t be easy to detect under all the sugar and flavoring you’re adding.

Cranberries have a beautiful red color that’s very similar to cherries. Maybe not the darkest cherries, maybe the bright red ones. But it’s still something ! Cranberries can and will bring extra tartness.

Pomegranate juice isn’t very easy to find, at least not the 100% natural one. You have top crush a lot of seeds. But it’s very close in color to cherries, almost a complete dupe.

Red hibiscus has been used as a food coloring for centuries, and it’s very strong. It, too, has a slight blue tinge to its red, so it will double as a cherry color very well. It ahs no specific flavor, so it won’t be noticeable.

If all else fails, or if you’d rather have less hassle, you can always get food coloring. We recommend mixing in the tiniest tiniest amount of blue into that red, just to make the shade closer to the original cherry color, more realistic.

Depending on what you’re making, gel food coloring may work better. This is especially true for creams, or where you don’t want to offset the water to solids ratio.

And that’s pretty much it about cherries and their beautiful, deep red color. They’re amazing in their own way, and they’re definitely the star of the show every February 20th on President’s Day.