Apple pie is as American as hotdogs, baseball, wide open roads, and really a damn delicious pie ! There are a few other desserts that are distinctly American, but apple pie reigns supreme. But why is that ?

Why is apple pie so American ? Why not another fruit ? Why pie ? What about the other pie types out there, are they any less traditional ? It turns out there’s a strong reason for apple pie, of all things, to be the so important. Let’s take a look. 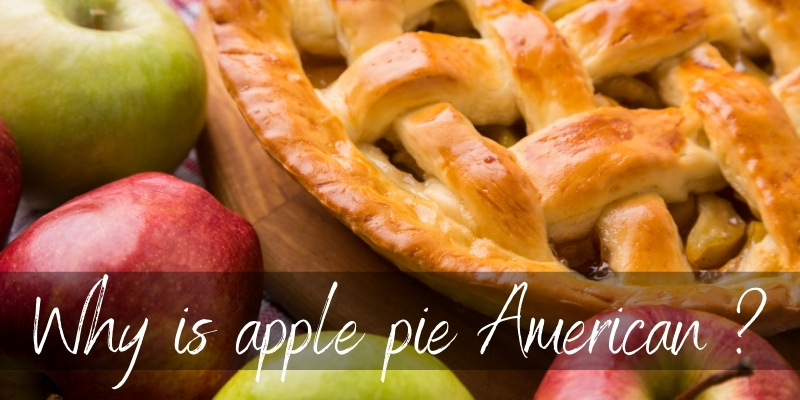 Table Of Content show
1 Why is apple pie American ?
1.1 How pies came to be
1.2 Why apples became the fruit of choice
1.3 The shift from tall, thick pies to shallow, open faced ones
2 Other traditional American pies
2.1 Cherry pie
2.2 Pumpkin pie
2.3 Key lime pie
2.4 Pecan pie

Why is apple pie American ?

Apple pie is distinctly American because it was heavily used by the Pilgrims, due to an abundance of apples and how well they were stored over winter. There are other traditional American pies, but apple pie is the most common one simply because it was easy to make for everyone.

To be fair, pies in general are not American. They came to America via the English settlers, and before that were widespread throughout Europe. But they were a very different item from the wide, shallow pies we know today.

How pies came to be

Pies have a long history, in that they are a very old way of cooking food. Interestingly enough, they were filled with all kinds of meat, for a very long time. Fruit was added as an extra flavor, like cranberries to turkey, or blueberries to duck.

Exactly when the very first pie was baked, no one knows. But the oldest recorded use of a pie dates back to the Roman era, though the exact date is unclear. It was actually a large piece of meat, set in a baking dish, and covered with a layer of pastry (flour, fat, water). The covering was meant to trap in moisture while the meat cooked.

From then on it evolved into the fairly thick and tall meat pies that are common in the UK. They were often stuffed with different kinds of meat, and sweet-sharp fruits like figs, forest fruits, or raisins. The point of the pie was to be the vessel in which the meat was cooked (baked), and to provide something bread-like to eat the meat with. Very practical when you think about it.

Meanwhile, in France a different ‘pie’ was becoming common: the galette. It’s a pie without any baking dish, with the filling simply set in the middle and the sides rolled or folded in. This pie type may have had an influence on the development of the shallow pies we know today.

Somewhere along the line meat pies started to be replaced with fruit pies, baked in mostly the same way. Sugar or any sort of sweetener was expensive and rare, so honey was used, and it, too, was expensive.

Why apples became the fruit of choice

Apples became the choice for American pie because they were the most abundant, cheapest, and easiest fruit to use in the New World. There were berries as well, but apples stored very well over winter. And most Pilgrims served some form of pie with their meals, so a steady supply of fruit (of any kind) was necessary.

Apples were everywhere and grew very well, so they became the go-to fruit for pies. The sugar trade began to rise as well, leading to easier access to sweetener. So more and more people could now bake something sweet, with a lower cost.

As time went on, America shifted almost completely from meat pies to fruit pies. Apple pie became a staple of the American family, to the point where in the early 1900s it was already ingrained in the culture and habits of people.

The shift from tall, thick pies to shallow, open faced ones

Exactly when the pie shifted from tall, thick constrictions to wide, shallow ones is unclear. It could have been an attempt at stretching the available ingredients. There was only so much flour and fat to be used over the winter, and apples were plentiful. So cooks started using more apples, more filling, and less dough.

Or, it could be that once people got a taste for the sweet apple filling, they wanted more of it.

In any case, one thing is certain. Wide, shallow pies bake easier and more uniformly than a thick, tall pie so this was likely the reason for the transition.

Apple pie is not the only American pie out there, there are many others. To be fair, it’s not just Americans baking apple pie, this is a very common way of using up leftover apples all over the world. But it has become traditional and a point of pride for Americans. So let’s take a look at other pies that are traditional.

Cherry pie is found all over the world where cherries exist, but in America they mean something a little different. Cherry pies are widely popular in February, but especially on February 20th. That is President’s Day, and also National Cherry Day. 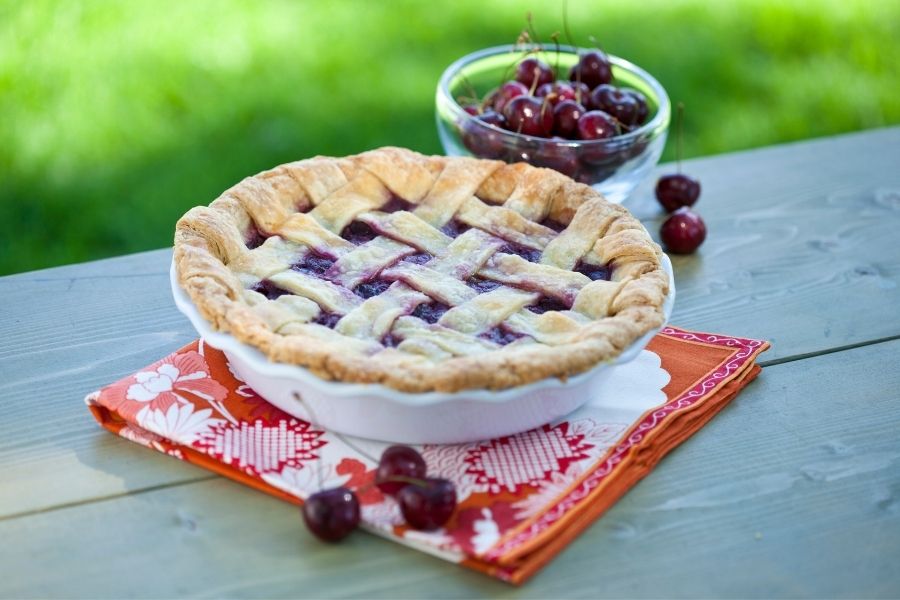 This all in honor of George Washington, the very first president of the United States. He made the cherry and the cherry tree famous, and all cherry pies are baked in his honor.

The only trouble is that cherries are not widely available in February, at least not fresh. So most of the time frozen or canned cherries are used. In older days, dried cherries or cherry preserve was commonly used as filling.

Pumpkin pie is most common in the northern states, and all of America knows the history of the pumpkin pie. Pumpkins were heavily used in the north, because they grew very well there and stored wonderfully over winter.  This pie is a staple for all Thanksgiving dinners, and all of the fall season in fact.

Key lime pie actually gets its name from the Florida Keys limes. Key limes are originally from Southeast Asia, but they have naturalized in the Florida Keys, and people have been using these for their superior flavor, compared to the common green limes.

In 2006 it was recognized as Florida’s official state food.

Pecan pie is made with pecan nuts, very similar to walnuts but native to North America. It’s actually the state pie of Texas. It always has whole or ground pecans mixed into the filling, and may also be sweetened with maple syrup.

Like pumpkin pie, it’s more of a fall-winter kind of pie.

In short, there’s quite a few traditional American pies out there, but the most famous and common one if the apple pie. It has an interesting tale and we think it’s beautiful how it turned form a necessity into a beloved tradition.