The epitome of summer: cherries ! These bad boys are delicious, juicy, and pretty expensive even when in season. But why is that ? Why are cherries such a premium-priced product, when other fruits are more reasonable ?

Well, it turns out there are a few reasons for that, and were here to dig them up. 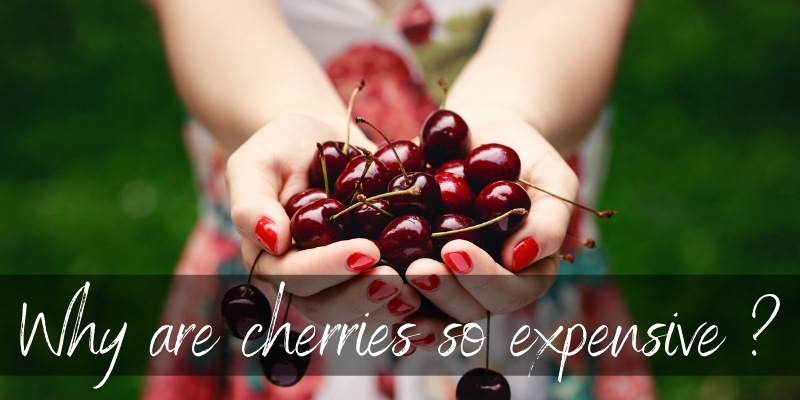 Why are cherries so expensive ?

Cherries are expensive because they’re a short season crop, and while they’re on shelves people want a lot of them. There’s also the fact that a good portion of cherry crops are simply eaten by birds before they can even be harvested.

In short, there are really not enough cherries to go around. Just like any other crop, cherries are weather-sensitive.  A bout of bad weather can mean a low yield, or very bland cherries that can’t even be sold, or just barely any cherries.

Keep in mind that we’re talking about fresh cherries, and we’re lumping together sweet and sour cherries. Now let’s take a much closer look at the reasons cherries fetch such a high price.

Cherries are a short season crop

Alright, first of all cherries are a summer crop. As America is spread form warmer to colder zones, the southern zones will bloom and fruit first. This means that cherries can be picked from late April all the way into August. Their peak is in mid-July, and they’re also the sweetest then.

But even a smart harvesting method like that can only go so far. Aside from summer, cherries can’t be found in their fresh form. From fall to spring they’re only found canned or frozen. You might find imported Turkish cherries though, but not in the middle of winter.

There is a high demand for fresh cherries

Since cherries are so delicious when fresh, once they hit the shelves they’re in high demand. This is common for all seasonal fruits and vegetables. Take a look at asparagus, for example.

When spring rolls around, you can find quite a bit of asparagus. Fresh, raw asparagus bunches in the produce aisle. By the middle of spring they’re all gone, and the price doubles or even triples.

Cherries are roughly the same. And since they spoil easily (not like strawberries though), they need to be sold close to the farms, or taken very quickly to the supermarkets all across the country. That’s an extra fee, and one you might not have noticed.

Birds are a major pest for cherry farms

Pests are common for each and every crop, that’s true. Once your crop produces its first fruits (or veggies), pests will come from all over and snack on your hard work. Crows are the worst offenders, as they will eat the planting seeds. No crops there.

Back to cherries, they come from the same tree year after year, no no planting seeds are lost there. But the seeds (pits) found inside the fresh fruit are often picked right off the tree. What birds ? To be honest, there are a lot of birds that can eat fruit. Some of the most common ones are house finches, mockingbirds, Eastern bluebirds, blue jays, and American robins to name a few.

This all means when farmers sell their cherries, they need to up the prices, to cover their losses.

A lot of cherries are imported from Turkey

There are a lot of cherries imported into America, all the way from Turkey. This has an effect on domestic cherry prices, because American cherries now seem expensive compared to Turkish cherries. Or at least, more expensive than usual.

That’s not to say this is the only reason cherries are expensive, not at all. We’re just saying it’s part of the bigger picture, and can affect consumer price perception. Let’s explain this a little.

Cherry crops are subsidized in Turkey. A cherry farmer will sell the cherries to middlemen and supermarkets that eventually sell them in America. Even after all those extra taxes, transport, and price markups, the imported Turkish cherries end up cheaper than domestic American cherries.

This is a sore point for many cherry farmers, and the issue is still ongoing. In case you’re wondering what the deal is with subsidized crops, in general it means that the government comes to the aid of farmers. Whether it’s grants, loans, free land to grow the crop or just covering a part of the expenses, it’s easier on the farmer’s pocket.

This means the consumer has to pay less, because the farmers (and subsequently the middlemen) don’t have to hike up the price to get a profit.

And yes, America does have subsidized crops and industries. It’s just that cherries aren’t on that list. Corn, soybeans (for oil), and beef are in the top 10 though, so those will always be readily available.

Why are Rainier cherries so expensive ?

Rainier cherries are expensive because they’re a small part of the annual cherry crop, and they’re the sweetest. This puts them in a premium category. They can charge more simply for being such an item. 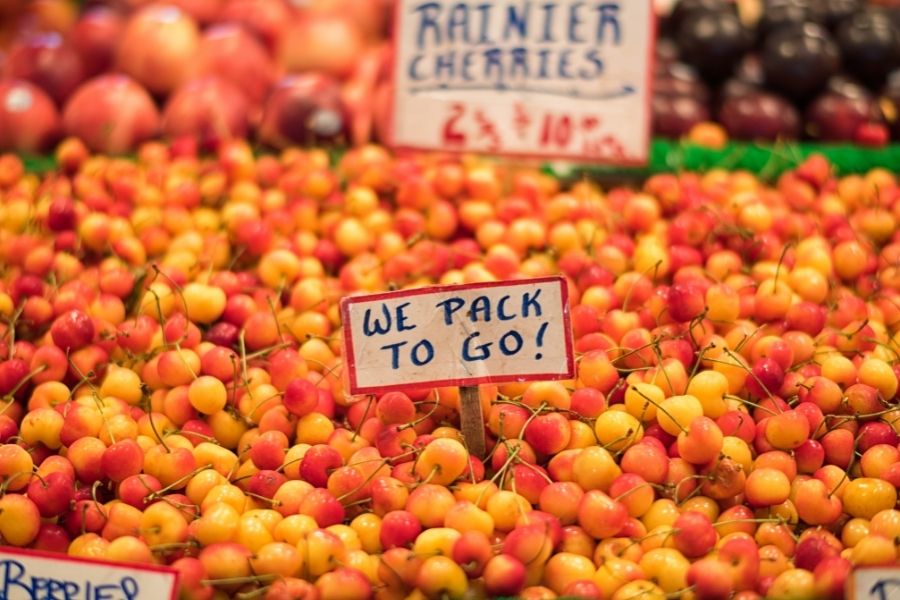 How to make the most out of your cherries

Okay, what can you do to make your cherries last ? Aside from storing them, they’re goo in the fridge for a couple of weeks in an airtight container.

Well you have a couple of items, aside from making cherry-based foods. Here’s what we mean.

Freeze or can your cherries

You can make your own frozen or canned cherries. You’d have to pit them, which is an amazingly slow and meticulous method, We recommend getting an actual cherry pitter. It works pretty fast and two people can make short work of a few pounds of cherries.

Then you can boil the cherries in water and sugar, and can the fruit along with the juice. Or, you can simply freeze the raw cherries in small Ziploc bags. About half a pound per bag should be enough, and this way you know how much is in each bag.

You could also make your own cherry jam. Again, the cherries need to be pitted, and you need sugar and pectin. Pectin is a natural substance found in almost any fruits, and it helps make the jelly bond. Apples have the highest pectin content.

If your cherries don’t have enough pectin you can end up with a jam that’s too runny. If that’s find for you then great. If not, you can always get some powdered pectin and add it to your jam as it’s cooking. You can find a simple and straightforward cherry jam recipe right here.

And now you’ve got yourself your very own cherry jam ! Or frozen cherries, or canned cherries, whichever you like best. You could make all 3 if you like.