Chicken seems to be everyone’s favorite, in one way or another. It’s quick to cook, easy to digest, easy to find in stores, and definitely something to please everyone. But there’s a few chicken parts that get overlooked, like the giblets or the thighs. Right now we’re going to discuss chicken thighs, since they generally tend to get pushed aside in favor of chicken breasts.

But why are chicken thighs so cheap ? If they’re so cheap you’d expect more people to buy them, as a cheap way to put meat on the table. Well, there’s a few reasons why that price tag exists. 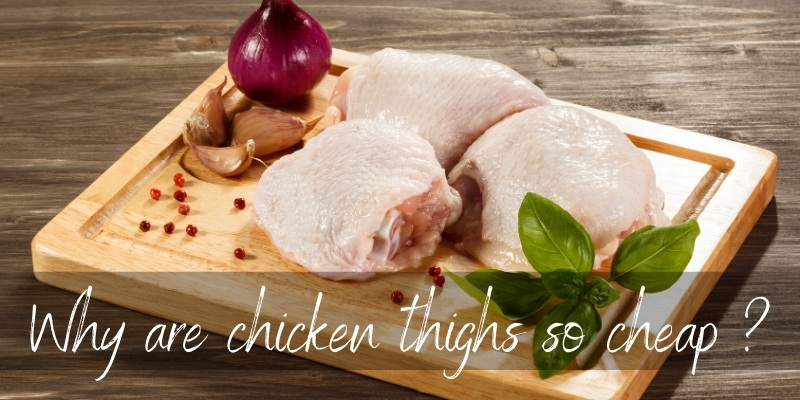 Why are chicken thighs so cheap ?

Many recipes ask for chicken breast or wings since they’re meant to be quick and easy. The thing is, chicken thighs are really delicious and often end up more tender than the rest of the chicken. Now let’s take a closer look at why you won’t even find chicken thighs for sale as often and breasts or wings.

The first and biggest reason is consumer preference, which has been shaped by the meat industry’s development. Each chicken produces two pieces of chicken breast, 2 wings, two drums, 2 thighs, and so on. It used to be that the whole chicken was used, when it wasn’t as easy to get access to meat.

Nowadays, and for the past few decades, especially in America, chicken and (meat in general) is very easy to find. The production is very high and nearly everyone can have access to better cuts of meat.

So most people nowadays have been raised with chicken breast and wings, since it heavily ties into the fast food industry, and the following point.

Chicken thighs are thicker than wings and denser than chicken breast, which means it will take longer to cook. In most Western countries people rely a lot on ready-made food, or pre-made frozen meals, and fast food, for various reasons. 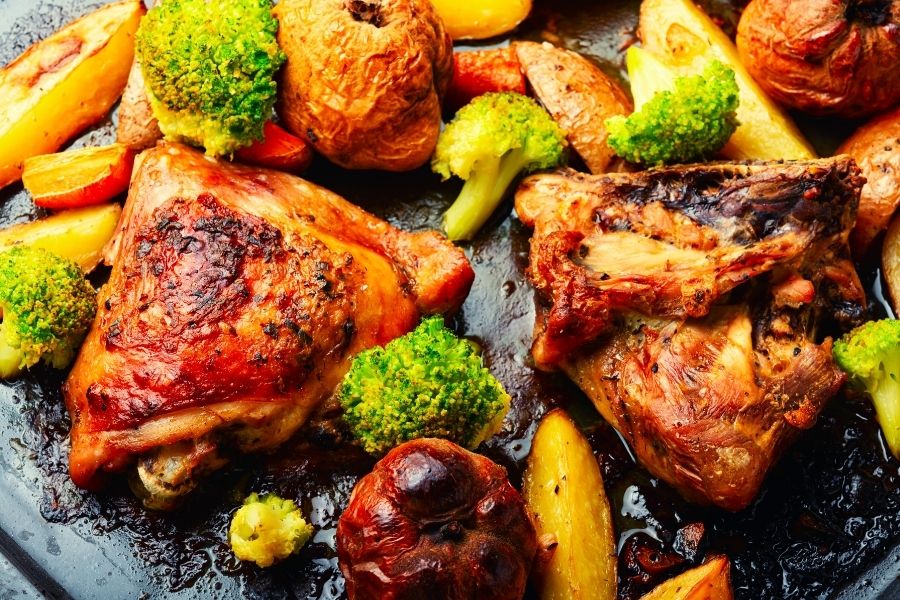 From a practical standpoint, chicken breasts and wings are superior to thighs in that they cook very quickly. You can serve many customers at once, and this is both profitable and convenient for customers.

Chicken thighs, aside from needing more time to cook, have two bones and are not as easy to eat on the go as breasts and wings. Even if we take a look at home-made meals, they’re not the first choice. Many recipes have been adapted to be one-pot meals or 30 minute weeknight dinners.

This leads to a lot of emphasis on how quickly the food cooks, how fussy it is to cook, and how easy it is to learn to cook. In this regard, chicken breasts win over chicken thighs, always.

3. Many people shy away from darker meat

Another reason chicken thighs aren’t as popular is because they’re considered darker meat. Personally we’re not completely sold on the dark vs white meat argument, but many people are, and they avoid darker meat.

The reasoning is that dark meat has higher cholesterol and is less healthy than white meat, like chicken breast and fish for example. So, butchers are left with chicken thighs that don’t sell, at least not as well as the rest of the chicken.

This is a shame, really, because the thighs are the most flavorful parts of the chicken, fat and skin included. It all comes down to learning the right way to cook them, and leaving the skin on.

Are chicken thighs bad for you ?

No, chicken thighs are not bad for you. They have a higher fat content than chicken breasts, it’s true, but it’s not enough to trigger a health issue. The meat itself is not the problem, but rather how it’s cooked in most recipes, with a lot of fat and oil and breading.

Chicken thighs are some of the juiciest and most flavorful cuts of chicken, so they will work great in recipes that are stronger in taste.

Do you cook chicken thighs longer than breast ?

Yes, chicken thighs take longer to cook through than chicken breasts. This is because the meat is denser, since it’s a part of the chicken that was always on the move – the top of the legs, connecting to the hips. At least compared to chicken breasts, which don’t get as much exercise and simply grow large because the bird is bred for large breasts.

On average chicken thighs take about an hour in the oven, at about 200 C/400 F with a bit of water added to the baking dish so they don’t dry out. This is for bone-in, skin-on chicken thighs. These taste the best, since a lot of flavor is in the bones and skin.

Read Also: Why Are Chicken Hearts So Cheap ?

Can I substitute chicken breast for thighs ?

You can substitute chicken breast for thighs and vice versa, but there will be differences in cooking time and depth of flavor. First, your chicken breast is likely cut into thin strips, which can cook in 10 minutes or less. Thighs need much more time, so only add the chicken strips towards the end.

Second, chicken breast is an incredibly dry and lean cut of meat. It will provide a weak, light broth for your soup or stew, or what it is you’re cooking. If you need depth of flavor, you’re going to need to add a bouillon cube to get the flavor you need. Chicken breast is notoriously bland, and if your recipe asks for thighs it’s likely looking for that extra kick of flavor.

Conversely, if you’re using thighs instead of breasts, be aware that they cook slower and you may need to buy boneless, skinless chicken thighs. You’ll need to trim off the fat, and cut these into very thin strips and use them like you would chicken breast strips.

And that’s about it. Chicken thighs are not everyone’s favorite, and they’re cheaper, simply because people don’t ask for them as often. So, they’re almost always sold at a discount price. It’s a very regional thing, since in Europe and Asia chicken thighs are used as often as the rest of the bird, at least for home cooking.