Chicken hearts are those little things you only find in the bird’s cavity once you clean it out. You rarely see a casserole of chicken hearts sold separately. But when they are sold separately, man are they cheap. Why is that ? Isn’t it still chicken meat ?

It seems chicken hearts, and actually chicken giblets (offal) are always cheap. There’s a reason for this, and we’re going to explain that today. 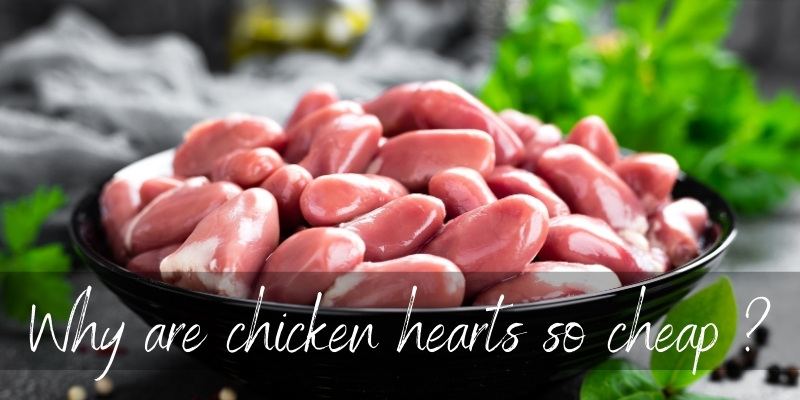 Why are chicken hearts so cheap ?

Chicken hearts are cheap because internal organs are usually the last to be bought by consumers. This is because giblets, offal, internal organs are viewed as gross, and an old-timey, poor type of food. The kind grandparents and great-grandparents used to eat when they couldn’t afford as much meat, so they had to use up the entire chicken.

Add to this the very gamey, bloody taste of internal organs, and compare it to the tender, sweeter meat that is chicken breast and wings, and you can easily see why they’re left behind. We’re not saying this is right, we’re simply bringing to attention that tastes have changed from generation to generation.

Back when chickens were actual farm animals and had to be slaughtered by hand, using up the entire bird was common. Nothing went to waste, partly because it wasn’t everyday you could do this, and partly because there really is nothing wrong with offal.

Chicken giblets (hearts included) are seen as a poor food

The thing with internal organs, hearts and gizzards and liver included, is that they are indeed a bit gross. Of all the parts of the chicken, the internal organs are the bloodiest, and this turns many people off.

Offal used to be very, very common in meals, even in America. But as the meat industry developed, the price of meat went down. ‘Good’ or ‘better’ cuts of meat are now much easier to find in supermarkets, and they’re more affordable.

Read also: Why Are Chicken Thighs So Cheap ?

There’s a sort of stigma associated with eating the internal organs of animals, because it reminds people of a time when their grandparents or older generations had to eat them. And to be fair, times were very different and maybe tastes were truly different.

Another important point about the internal organs of the animals we usually eat is how much more real they seem. A cut of chicken breast is easy to separate (in your mind) from the animal itself.

But cooking hearts, livers, gizzards, parts that we humans have as well, makes the animal seem that much more real. It’s no longer a piece of meat you get from the supermarket. It’s an animal that used to live, breathe, run around. For some people this feeling is too much, and we understand why.

In Europe and Asia the recipes still incorporate a lot of offal, and many of the old style meals are still in place. Better cuts of meat are still available, but the people don’t shy away from the internal organs as much. It could be because of tradition, it could be because they have a very varied cuisine, we’re not sure.

We’re from East Europe ourselves, and have been raised with various chicken parts in our meals, internal organs and hearts included. Conversely, Americans who are the first and second generation of immigrants from Europe and Asia are much more likely to be okay with eating chicken hearts. This is also valid for the Southern and Eastern states, who still keep many of the older recipes and have a higher percentage of farmers.

This ties into the American tendency to choose chicken breasts and wings over thighs, because it’s a type of meat that cooks much faster. They’re easily used in pre-made food or fast food, whereas you won’t find deep-fried chicken hearts at KFC.

Chicken hearts taste darker, more like game and blood, than the rest of the chicken. It’s a very smooth muscle, so it won’t even have the same texture as chicken breast or wing, or thigh.

These bits of meat cook very fast, about 15 minutes for a batch is enough. If you overcook them, you can easily turn them rubbery. In the case of turkey hearts, they can get downright chewy.

Back to the whole taste thing, the flavor may be off-putting for many people, simply because it has a significantly bloody note to it. This is no muscle that resembles meat we’re used to, so it’s a very strong and noticeable flavor. A lot of people simply don’t like that. 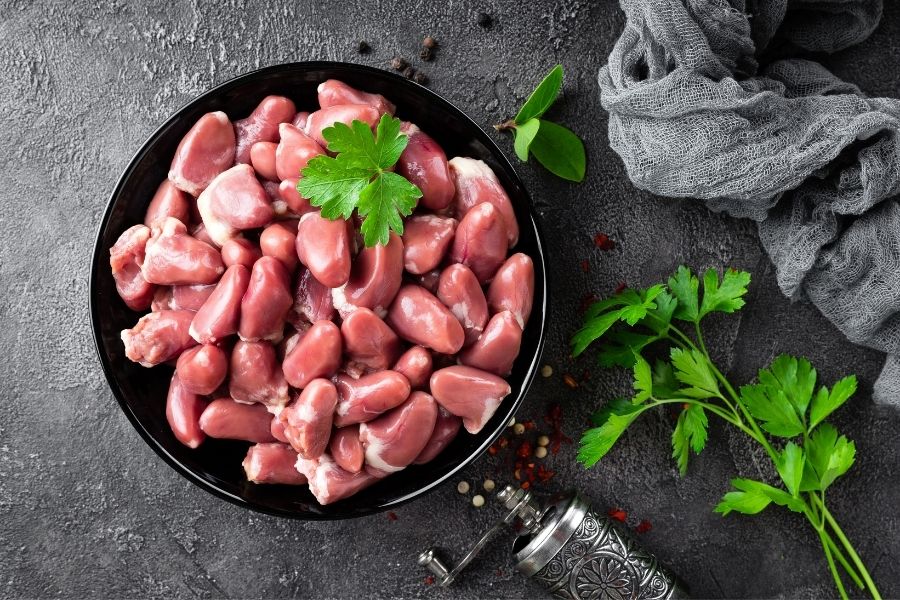 Do you have to clean chicken hearts ?

Yes, you should clean chicken hearts before cooking them. They need a good rinse under cold running water. You may even find arteries with a bit of clotted blood in them, so be sure to massage that out.

Another option is to cut the hearts in two, lengthwise. This makes them much easier to clean, but remember that they shrink anyway during cooking. So cutting them in two will make each piece even smaller. The decision is up to you, but they need to be cleaned either way.

Read Also: Why Is Pork So Cheap ?

How do you know when chicken hearts are done cooking ?

Chicken hearts cook fairly fast, and you’ll notice they’re done cooking when you can easily insert a fork into them. Much like gizzards, they first stiffen, and then gradually tenderize as they cook. Hearts are much more tender than gizzards, so they won’t take as long to tenderize.

Thirty minutes should be enough for hearts, however they won’t suffer if you let them cook for an hour. They will shrink, like livers and gizzards.