Raisins are delicious little things, expect when they’re not. And plenty of people hate them with a vengeance. You may wonder why that is, and how raisins can offend someone so much. In truth we all have dislikes, and for something as important as food, this can be cause for arguments. Have you ever witnessed the ketchup-on-fries argument ? It’s something like that.

So let’s see why people hate raisins so much. And if there’s anything you can do to those raisins to make them more palatable. 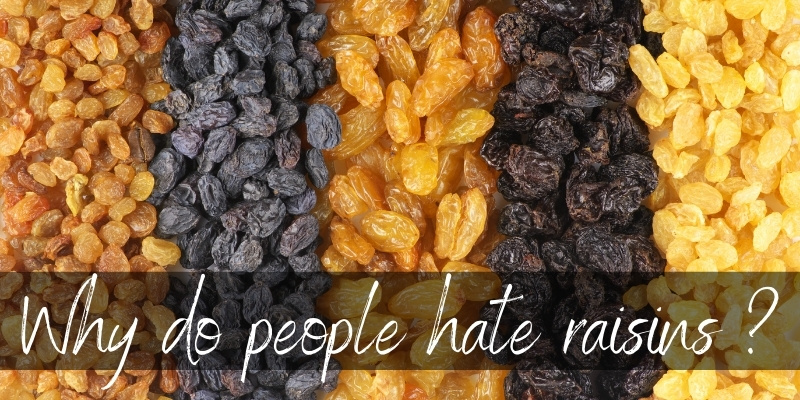 Why do people hate raisins ?

Those who hate raisins do so because they confuse the look of a raisin with a chocolate chip, like in cookies. A second reason is the texture and flavor of raisins, which are a bit sticky, gooey, and not very sweet. Some people find this texture unpleasant, and they likely dislike other dried fruit like goji, currants, cranberries, and so on.

The biggest reason seems to be the confusion with chocolate chips. A person gets their hopes up, only to be met with something distinctly not chocolate, and much less sweet. Fortunately there are ways to mitigate the impact of raisins, and you can easily improve on their taste.

How to improve raisins

Do your children hate raisins ? Do you hate raisins ? Maybe there’s still some hope left, because in their own way raisins are nice, if you use them right. Maybe some of the ideas on this list will help you out. Not all of them are kid-friendly, so pick carefully. You can even use several of these ideas together.

Soak raisins in a flavored liquid

Most people simply dunk the raisins into their oatmeal or cookies and expect people to like them as-is. That’s a big no-no. The texture is tough, and you don’t get a good flavor out of them.

Always, always soak raisins before using them in anything. They get some of their sweetness back, but more importantly they become easier to chew.

Read also: Why Is Fruitcake So Bad ?

What you soak them in is completely up to you, but we don’t recommend dairy. A fruit juice, water, simple syrup, grape must, whatever you like. If you’re cooking for adults, you can even soak the raisins in a bit of booze. Don’t serve it to kids though, the raisins really soak up a lot.

Once soaked in whatever liquid you choose, you need to strain them and add them as usual to the recipe.

Raisins have a tart, fruity flavor that doesn’t go with just anything. We think a stronger, deeper flavor goes well with these because the raisins then have something to ‘cut’ through. So something rich like chocolate will pair much better with raisins than plain vanilla batter.

Use other dried fruits as well

You can use other fruits aside from raisins, to add more flavor and more sweetness. Which fruits you use is up to you, but do not use those brightly colored candied fruit. They’re just as bad as plain, dry raisins, only they’re sickly sweet.

Fruits that pair well with raisins are dates and figs, and even plums. Be sure to soak all of these !

Mince or blend the raisins

If you want to introduce raisins into a recipe but want to avoid the texture issue, you can simply blend or chop them finely after they’ve been soaked. The result should be a coarse paste that will help glue the batter together.

You can add a bit of fruit juice to the paste, if using a blender, to get a really smooth paste.

So you find yourself in the position to completely forgo raisins. Maybe you don’t like them, maybe you can’t find them, it doesn’t matter. You need a raisin substitute.

Let’s first look at what a raisin does in a recipe, so we know what kind of substitute we need. raisins provide a fruity, tart flavor, a small amount of sweetness, and plenty of texture. They’re also very small. They don’t melt. Alright, now let’s see the substitutes.

Dates are sweeter and less tart than raisins, and they may sit better with some people. But, you need to chop these bad boys and they’re incredibly sticky. So you can either un the knife under hot water before each slice, or dunk them in a blander and add some hot water.

Make sure they’re pitted dates before using the blender. You can easily break your blender with date pits.

Figs are possibly better than raisins, especially since they’ve got than nice, smooth texture with the crunchy tiny seeds. These are great to use whole in something like dumplings, but you still need to soak them a little. 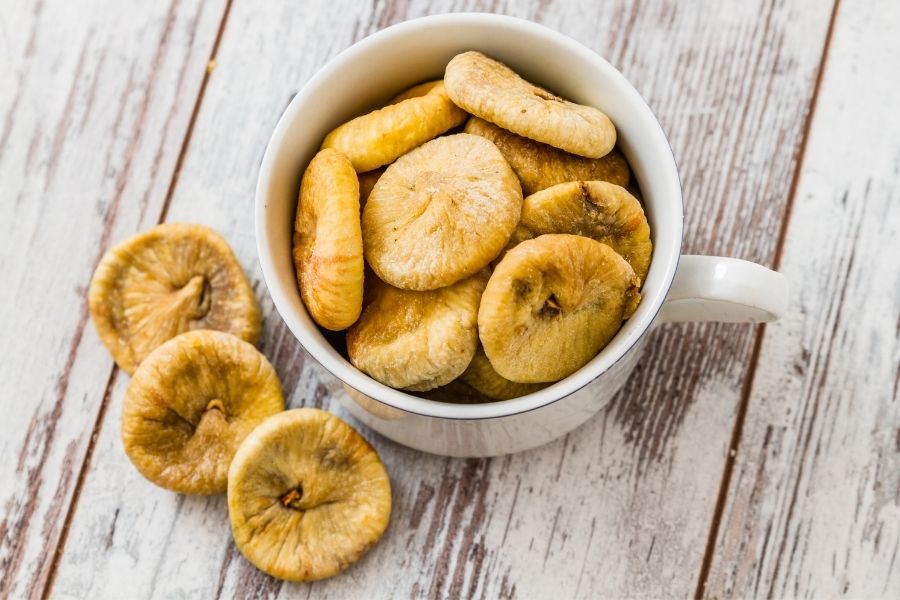 If you want to puree the dried figs, yo don’t need to worry about the pits, there aren’t any. But you still need to add some hot water, because they’re sticky, just like dates.

Dried plums have a bit more moisture than dates and figs, and definitely more than raisins. They’re also more tart than raisins, so you may need to add more sugar to the recipe. Dried plums are fairly easy to mince, so you may not need to use a blender.

Cranberries are notoriously sour, so make sure you get the sweetened one, or add some sugar. These leave a beautiful stain if using vanilla batter, but they work just as well for chocolate batter. Make sure you soak these too, because they’re just as tough as raisins.

Dried apricots are bigger, like dried plums. They still need to be soaked, but they’re definitely sweeter than raisins. They also blend better into a light colored batter than raisins.

As you can see, there are plenty of options to substitute raisins if you have to. You just need to pick the one that works best for you. Or, you can improve on raisins with the methods we discussed earlier.