Peaches, apricots, and nectarines are three great fruits but we often mistake them for one another. They look and taste very similar and it’s no wonder folks get them confused all the time.

Today we’re going to talk about the differences between these 3 fruits, and hopefully you’ll have an easier time telling them apart.

First though, we have to look at each fruit in particular, so we can really understand the differences. 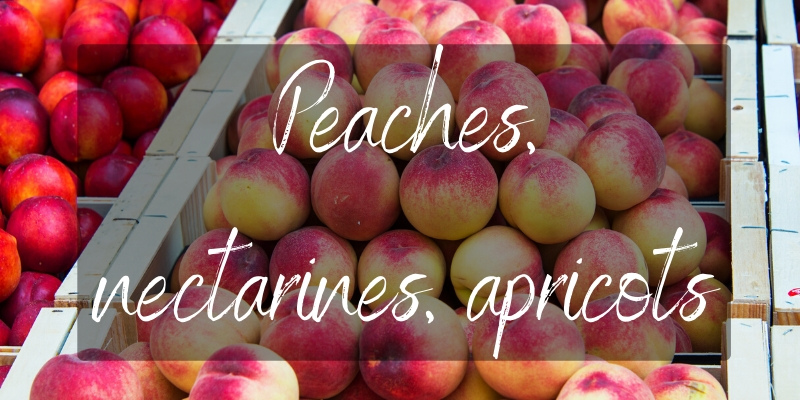 Table Of Content show
1 What are peaches ?
2 What are nectarines ?
3 What are apricots ?
4 All 3 belong to the same sub-family (Prunus)
5 Three differences between peaches, nectarine, and apricots
5.1 1. Nectarines have no fuzz but are the same as peaches
5.2 2. Apricots are smaller, and a bit dry
5.3 3. Peaches and nectarines are sweet-tart
6 You can swap peaches for nectarines

Peaches are a type of fruit originally from Northwest China, but nowadays they’re grown worldwide. That being said most of the world’s production of peaches and nectarines is from China (about 62% in 2018).

Of the three fruits we’re discussing today peaches are the ones with the most fuzz.

In shape and color they’re pretty much the same as a nectarine, except maybe a bit bigger.

Nectarines are basically the same fruit as peaches, except they have no fuzz.

They’re the same in color but they may bruise more easily.

It’s not currently known what led to the mutation that gave nectarines no fuzz, but due to this they’re viewed as a different fruit.

Apricots are a different story, and their origins are a little unclear. They’ve been known in Armenia for thousands of years and locals believe that’s where they first appeared.

These fruits are different from nectarines and peaches, both in flavor and in appearance – they’re much smaller and have a uniform golden-orange color.

All 3 belong to the same sub-family (Prunus)

They’re all got the same same stone pits on the inside and through that are related to the almond family.

All this means they’ve got to have some similarities, as well as some differences. We’ll discuss these in the following segment, starting with the most important or easy to recognize.

So, now we know what are those three delicious fruits and found out that the nectarines and peaches have a lot in common while the apricots are a bit different. But let’s see the differences between them in a bit more detail:

1. Nectarines have no fuzz but are the same as peaches 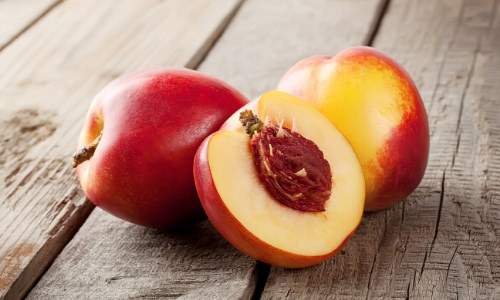 Nectarines and peaches are basically the same fruit. Same family, same kind of tree, they even look almost identical.

Their main difference is whether they have fuzz or not.

Nectarines have no fuzz, which is the result of a naturally occurring mutation. This means the outer skin of nectarines is smooth, and is also a little bit thinner

Or at least may appear thinner, due to the lack of fuzz.

Both peaches and nectarines are orange and red colored, ranging from deep, dark red (sometimes burgundy) to golden orange. They may appear spotted or slightly stripy like red apples.

A key difference between nectarines and peaches – nectarines are usually more uniformly red, and a deeper, darker red at that.

2. Apricots are smaller, and a bit dry 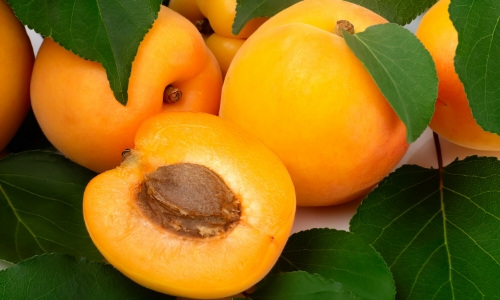 Apricots are much smaller than both nectarines and apricots. In fact they’re about half the size of a peach, sometimes smaller depending on the harvest.

Compared to nectarines and peaches apricots are golden-orange all over, with no darker or lighter spots. Unripe apricots may have a greenish hue.

If you see any dark spots on apricots (like a dark brow mottling) you should avoid those.

These fruits do have a bit of fuzz, but it’s much smaller and harder to notice than peach fuzz.

Apricots are also much drier. Where a ripe nectarine or peach will soak your hands and clothes, an apricot has less juice and will not make a mess when cut open.

In fact apricots are the ones you’ll find dried and sold in the dried fruit section, while you’ll never find nectarine or peaches.

3. Peaches and nectarines are sweet-tart 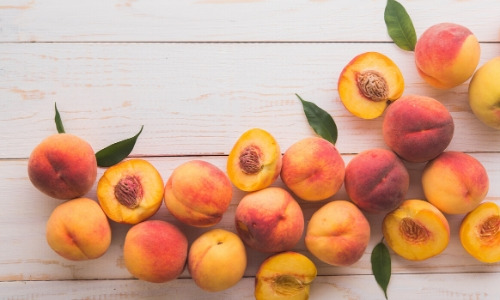 Apricots are sweet as well, though not as juicy or tart as the first two. They’re a bit more mellow, so that’s one way to tell them apart.

Read Also:Jelly VS Jam VS Preserves

You can swap peaches for nectarines

If your recipe calls for peaches and you have none, you can swap them with nectarines. The end result is the same, their texture is pretty much the same and the flavor is the same.

Swapping with apricots may be an option, but it’s like swapping onions with shallots, or soy sauce with Worcestershire sauce.

You may need to offset the dryness of apricots with a little juice and a dash of lemon juice if you want to get a flavor as close to nectarines or peaches.

All that being said any of these fruits will work great in a tart, pie, preserve, smoothie or eaten plain on their own.

Now you’ll definitely know the difference between  peaches, nectarines, and apricots so your next grocery trip will be fully informed.