Everyone’s got some sort of jam tucked away in their pantry or fridge, and everyone has a strong preference for this fruit over that. So, naturally, everyone gets upset when they open their favorite jar to find that it’s…not right. It’s got fuzzy white patches and it doesn’t feel sorry at all.

Why does jam get mouldy ? What triggers it and how can you avoid a mouldy jar of jam ? Can you just scrape it off and keep eating ? All this and more, coming right up ! 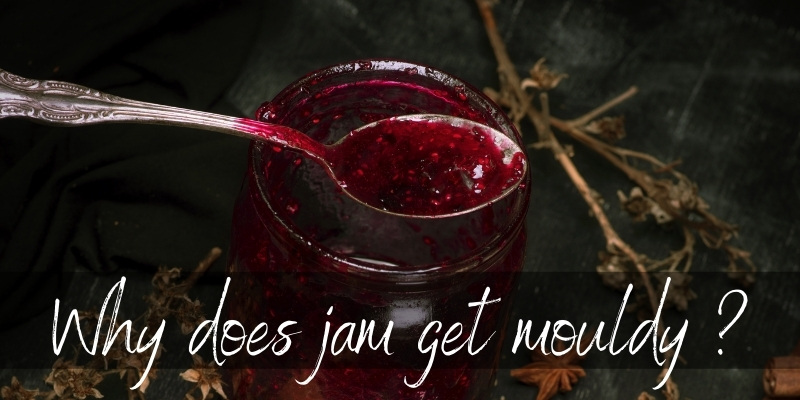 Table Of Content show
1 Why does jam go mouldy ?
1.1 Mould is attracted to moisture
2 Can you eat the jam after scraping off the mould ?
3 How to prevent mouldy jam
3.1 Always sterilize the jars
3.2 Keep a tight lid on the jar
3.3 Always use clean utensils when scooping out jam
3.4 Store the jam in a cool, dark, dry place

Why does jam go mouldy ?

Jam turns mouldy when mold spores come into contact with moisture inside the jam jar. This is likely to happen to a jar that has been previously opened, or if the jars were not properly sterilized before the jam was poured and sealed.

Mould spores are everywhere and the human immune system can handle them, as long as they haven’t grown into a colony. This means you should avoid contaminated foods, including a compromised jar of jam.

Mould is attracted to moisture

Why does mould develop in the first place ? The spores are present in the air around us, in a small quantity. This means that each time you open the jar you expose its contents to mould spores. It’s attracted to moisture, so if your jam has started to condensate, or is past its storage prime, it will develop a thin film of water. That is the perfect place for mould to grow and thrive.

Mould is not the same thing as bacteria, which are destroyed by cooking on high heat. So the only offensive thing growing in your jam jar should be the occasional mould patch, and not anything else.

Can you eat the jam after scraping off the mould ?

To be on the safe side, you should not eat anything that is contaminated by mould. 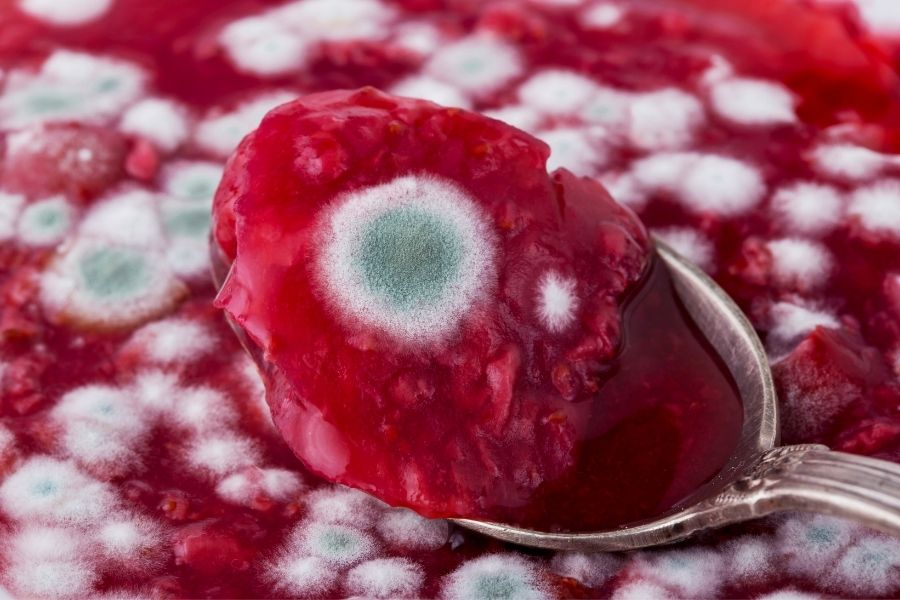 However this seems to be a very personal choice, and some people do not mind this. Mould spores are usually just on the surface of items or foods, and the more they grow the deeper they contaminate. In theory, by removing the chunk of mould and about an inch of extra jam, just to be safe, you should have a mould-free jam.

But the rest of the jar now has mould spores on the rest of the inside. To us, any mouldy jar of jam is compromised and is unfortunately not good to eat anymore. We cannot guarantee your safety, nor encourage you to eat from a jar of mouldy jam, even if the mould was removed.

Read also: Why Is My Jam Not Setting ?

We recommend throwing it away altogether, or if you need the jar, empty the contents and wash the jar thoroughly with the hottest water you can stand, and rinse with vinegar.

Be especially careful if you have a weak immune system, such as the elderly, pregnant women, young children and infants, those suffering from severe illnesses. For them, handling anything with mould on it can turn into a health issue.

How to prevent mouldy jam

There are ways to prevent your jam from turning mouldy, and some of them have to do with how you store it, how clean the jars are, and how you handle the jam after opening the jars. In truth, there is no way to completely avoid a mouldy jam, other than eating it before the spores develop into a growth. But there are ways to postpone this form happening. So here you go.

The first step to clean jam is clean jars. By clean we mean washed, rinsed with vinegar, rinsed again in hot water, and ‘baked’ in the oven. All of this ensures several things:

All of this should be done on the day you’re making them jam, and you can even dry the jars in the oven after their final rinse. Be sure to check the lids for any stray bits of leftover food, those hide there sometimes.

Keep a tight lid on the jar

When closing the jam for the first time, you don’t need to close it 100% because the seal will suck in the lid. It will be a tight close anyway. But after you’ve opened the jam, make sure to close it properly every time.

Check the sides of the lid or the jar opening to make sure there are no bits of jam on the outside. They can easily start to grow mould and contaminate the inside.

Always use clean utensils when scooping out jam

When you’re taking out some jam to spread on a piece of bread and butter, make sure to use a clean utensil. By clean we mean it wasn’t used for another food before hand, a clean, unused knife or spoon.

Never lick the jam spoon of knife and then stick it back in the jam. Even if it’s your jar of jam, you bring bacteria into the previously clean jam, and this way you get more than just a mould growth. Be clean, get a fresh spoon.

Store the jam in a cool, dark, dry place

When storing your jam, where and how you store it is very important. In theory jam can last up to 2 years unopened, if properly preserved. But you can dramatically reduce that period by keeping it it somewhere warm, or moist.

So store your jam jars in a coo, dark, dry pantry. The fridge is an even better option but you likely don’t have enough space for the entire batch you just made.

The cold temperature is the best way to prevent bacteria from spreading, and prevent the inside of the jar from condensing, thus producing moisture. And a dry storage space ensures no mould will grow on the outside of the jars as well.

In short, jams are meant to store well and for a long time, but you need to help them out. Store them properly and you’ll be able to enjoy them for months, even years.