Bacon is much loved for its intense flavor and how much it can improve any dish ever. A good portion of the bacon’s power is its salt, alongside its smokiness. Sometimes the salt can be too much, especially if you’re trying to cut down on sodium.

So why is bacon salty in the first place ? Is there any way to reduce the salt in bacon, cooked or otherwise ? Let’s take a look. 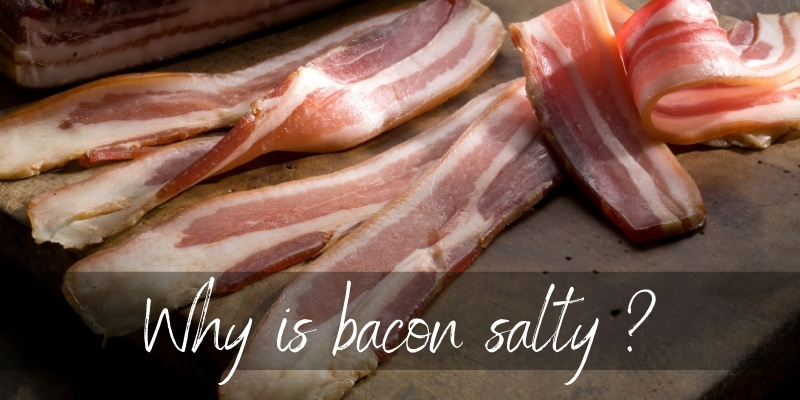 Table Of Content show
1 Why is bacon salty ?
1.1 Bacon is brined or dry-packed in salt
1.2 Salt helps prevent the spread of bacteria
2 What if my bacon is too salty ?
2.1 Uncooked bacon
2.2 Cooked bacon
3 Is pork naturally salty ?
4 How to pick out less salty bacon
4.1 Bacon alternatives

Why is bacon salty ?

Bacon is salty because of the way it’s manufactured, meaning it’s brined or dry-packed in salt. This results in a lot of moisture being drawn out of the meat, and creates a hostile environment for most bacteria and fungi.

The result is a side of bacon that is both delicious and salty. The low moisture content means it cooks faster, and once you put it in a pan the moisture evaporates, leaving behind the same amount of salt.

This is why crispy bacon will always be saltier than fresh bacon.

Bacon is brined or dry-packed in salt

Bacon relies on a time-tested method of curing and brining meat. This is how meat was made to last so long in storage ages ago, and though it’s no longer necessary, we still love the flavor.

So the cut of bacon is either submerged in brine (very, very salty water that may also contain herbs), or dry-packed with salt (like the original corned beef). This leads to a lot of salt absorption, and a lot of moisture drawn out of said meat. 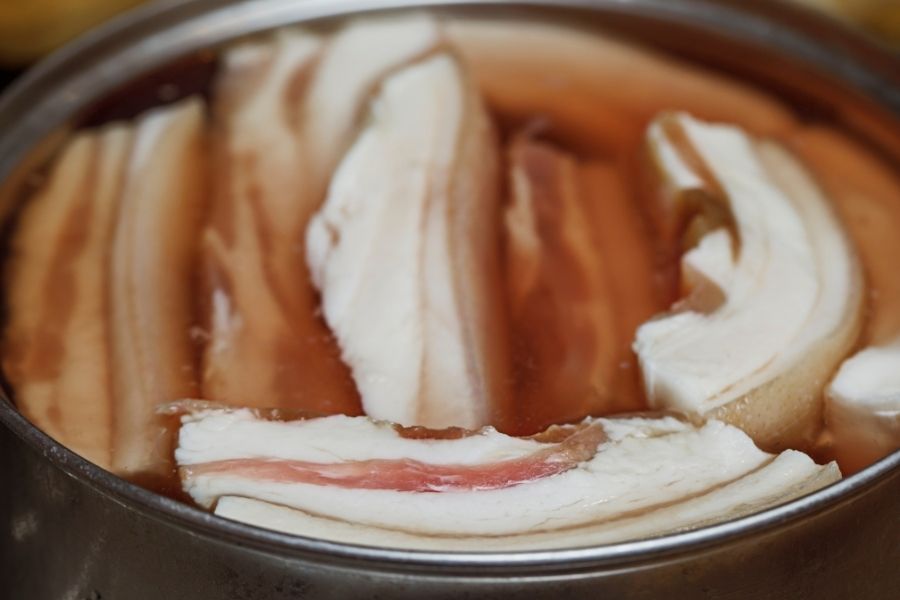 Read also: Why Is Bacon So Expensive ?

This is more evident in the case of dry-packed bacon, which can lose up to 30% of its total volume. Brined bacon still retains a lot of moisture, but not as much as fresh.

The reason bacon is packed in brine or salt instead of something else, is because they draw out moisture. Bacteria and mold spores thrive on moisture, so the less moisture there is, the lower the chance of them developing on the meat.

This is why dry, salted meats like beef jerky can go on for so long, as opposed to fresh meat. As the meat cures it’s not really raw meat anymore. It is aged, dehydrated, and salted.

What if my bacon is too salty ?

In case your bacon is too salty there are ways to remove the extra salt. You may lose some flavor, especially if the bacon is not smoked by has liquid smoke applied to it. Still, let’s take a look.

If your uncooked bacon is too salty, you can reverse-brine it. You need a lot of water large enough to hold all the bacon you want. Make sure it fits in the fridge. Submerge bacon in cold water, cover, let sit for at least 2 hours. Check the bacon, and see if it’s too salty. If it is, remove the water, add a fresh batch, cover, and put everything back in the fridge for another 2 hours.

Repeat until the bacon is no longer extra salty and it just right. Keep in mind that the more you soak the bacon the more you may lose smoke and salt, so you have to find a happy medium. It may take several water changes.

When you’re cooking this soaked bacon, make sure to pat it dry before you put it in the hot pan. Any oil will splatter, and you have a lot of moisture to cook off.

Cooked bacon is a bigger issue, and short of simply not using as much bacon the ideas are sparse.

Our first idea is to use something like heavy cream, if your recipe allows it. The extra fat in the cream will mask a lot of the salt, but it will not remove it.

You can also add mashed potatoes or bread crumbs, again depending on your recipe. Sweet potatoes may work too, but they can make the dish too sweet sometimes.

No, pork is not naturally as salty as a piece of bacon is. Bacon is salted and smoked to get that flavor, while pork meat is not as salty when raw.

All raw meats have a small amount of sodium, just like beef and chicken and turkey. It depends a lot on how the animal was fed. But if you’re wondering if fresh, raw bacon meat is salty to begin with, it’s not. In fact it’s really not that impressive, what helps it a lot is the fat percentage.

How to pick out less salty bacon

The biggest problem with bacon salt is how much it masks a poor product. You can easily get a slab of bacon that is not good quality but your tongue will be overwhelmed by the salt and smoke factor.

In fact, that’s what you should be avoiding. There is no way to tell which bacon is less salty by just looking at it. So, the first thing to do is turn the packet over and look at the salt or sodium content. The lower it is, the less salty your bacon will be (cooked or not). This means looking at all the brands you have available in front of you.

Brined bacon isn’t any better than dry-packed bacon, at least in terms of salt content. But one thing you can be sure of, when you cook down a slice of brined bacon it will end up saltier than the dry-packed one. There is more moisture to evaporate.

Read Also: Can You Reheat Bacon ?

If you’re looking for an alternative to bacon that brings a similar flavor but with less salt, there are a few meats you can try. None of these are a guarantee of low sodium content, but you may find one that has less salt and bring a flavor similar to bacon.

First is prosciutto cotto, a type of prosciutto that is cooked before being salted. Then you may try coppa (or capocollo), meat is taken from the back of the pig’s head and towards the shoulder. Fatty, usually dry-cured, but may be less salty.

Pancetta is also a great option if you’re looking to replace bacon, as it’s got both meat and fat and offers a similar flavor.

In short, if you bacon is too salty it’s simply due to the way it was made. This means that you can recognize the brand in the future and buy a different one, less salty. You can always just soak the bacon before you fry it, if all else fails.