Bacon is one of the most loved foods in North America. You will never find someone who is happier when they get to eat a good, crispy piece of bacon. Just about everyone who isn’t a vegan sees the joy in eating a few crispy slices for breakfast.

However, when you get bacon from a really good butcher, the price will be a bit higher than what you expected. The grocery store has bacon that’s much cheaper but sacrifices a lot when it comes to quality. Bacon uses pork belly, which is seen as the most valuable part of the pig.

So let’s talk about why bacon is so expensive and enjoy this delicious piece of meat even more. 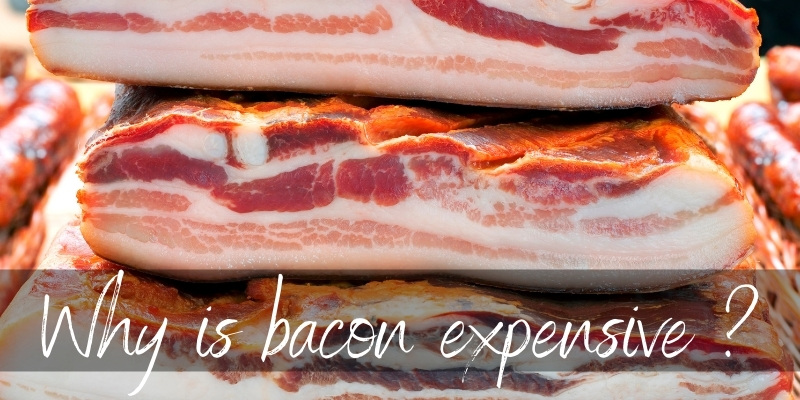 Why is bacon so expensive ?

Bacon is expensive because it can only be made from pork belly, and an entire pig must be slaughtered for a single pork belly. There is a very high demand for a supply that can’t really meet it.

The main reason for this is that bacon has become very popular in countries where it previously wasn’t, leading to an increase of its overall price.

Aside from all this bacon takes a while to cure and smoke, and this type of product is always going to be expensive.

In short, good, quality bacon takes time to make and can only be made with a single part of the pig. We’re going to explore these reasons in depth below, because we might find a solution to all of this.

Smoking bacon is what gives it a more addictive flavor to most people. The bacon tastes well on its own, and it really never dries out because of the fat.

Having a smaller, more consistent piece of bacon is better than a bigger piece of bacon that has no smoke and reduces a lot. To properly smoke a piece of pork belly, it takes at least a weak to get the flavor right.

You will know it’s done when the edges look different from the center of the meat.

Curing meat is also a process that can take a long time. The butcher decides when to use a wet or dry cure. But if they decide to dry cur it, it will take weeks to get the desired taste they are looking for.

The big, thin cuts of bacon use very cheap processes to get their product on store shelves. They use liquid smoke, which you aren’t really going to taste in the final product.

You can often see tiny holes used to inject smoke, which reduces the quality of the meat. Compared to higher grades of bacon, this is going to shrink massively. It aims for a price point the average person is willing to pay for, and most still enjoy those cuts of bacon when they go to the grocery store.

Not all bacon is high quality

The quality of bacon is a lot harder to maintain than other kinds of meat. It’s not something that lasts forever, and the customers need to buy it within a few days because they want rich bacon that will have the best quality.

Freezing is always an option, but then the quality goes down significantly. That’s fine if you are okay with just making the bacon by yourself. Still, it’s something you would be criticized for if you served previously frozen bacon at a restaurant.

Bacon has more fat than other kinds of meat, which doesn’t work well when you want to thaw it. It has natural liquids in the bacon’s lean part and the fat that becomes stiff and rigid when it gets cold.

This makes it really hard to properly cook it evenly when you flash freeze it. It’s very noticeable to experts when they look at the bacon sold at the grocery store. Most people see how the bacon’s lean parts are tearing a little bit and lack overall quality control.

When you get slices of bacon from a butcher or a better grocery store. You notice that the strips can hold themselves a lot better than other kinds of bacon. It really stays together, and you don’t see any tearing from the lean parts of the meat.

Even from a purely aesthetic point of view, it’s much more attractive to the average person who sees the cheaper version. When comparing a cheap cut of bacon and an expensive cut of bacon, the more expensive one is usually going to look a lot more appetizing, at least when it’s raw.

Read also: Do You Need Oil To Cook Bacon ?

There is no denying the demand that has soared in the last few years for bacon. The taste of bacon is just appealing for many people when it’s done right and goes well with a lot of things. If someone wants to make pasta and wants to add richness, chopped bacon is a perfect way of doing that.

Bacon is in classic sandwiches, which the average person has some love for. Whether it be the standard breakfast sandwich, a BLT, or just to be used as a piece to add crunch to a specific sandwich. Very few non-vegans see bacon as a bad thing to be included in a meal for taste.

Crispy bacon is highly coveted but hard to make because it burns very easily. When making it in a pan, it’s tough to find the sweet spot of not being too greasy but also not getting it burned in the process.

When done right, it becomes a perfect addition to a salad, a standard breakfast plate, chopped and mixed in with pasta or rice. When it’s burned or too greasy, the food becomes too rich, or the flavor becomes ruined because the bacon was burned.

Usually, you can get it to the perfect level or crispiness by just putting it in a panini press.

Bacon tends to be really fatty, but you can use that fat for other kinds of dishes you would like to make. For example, flexible burritos need fat to bind around whatever they are covering.

If you have bacon you can easily cook it and mix it with your burrito to give it restaurant quality. You can also use it for mashed potatoes, biscuits, popcorn, as a glaze for pizza crust, or whatever else your heart desires.

We can either pay extra for bacon, or we can look for alternative cuts of pork. What we should look for is something that has some fat marbling, so let’s take a look at a few examples.

While it won’t have the exact same flavor of pork bacon, turkey bacon is a very good substitute. It’s got the fat, the meat, the similar flavor, and it will crisp up nicely.

While pancetta isn’t bacon, it’s also got fat marbling and crisps up very nicely. You can find it cubed or in thin slices, just like bacon. 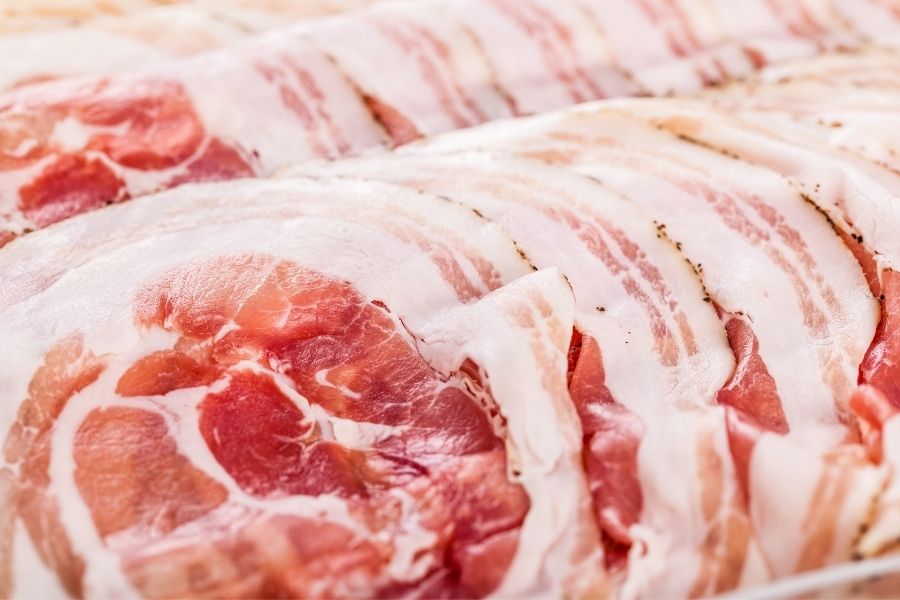 East European version of bacon, so you can find it in specialized shops. It’s not as long and thin, and in fact comes in thick, long slabs that are more high than wide. Very similar in taste, and you will have to cut it up yourself.

Otherwise known as back bacon, this type has a wider portion of meat and definite white fat around the edges. It’s different from regular bacon, true, but it’s very close in flavor.

It won’t have the fat you get in bacon, and it might not crisp up the same way, but it will get you the same smoked and cured flavor that bacon has. It really depends on what you’re cooking.

Alright, that was everything we could think of. Hopefully, you got some good ideas and substitutes.