Prosciutto, pancetta, and bacon are all great additions to any pasta or pizza, and all of them are wonderful in the morning with some sunny eggs.

But these 3 often get confused for one another, and there’s a good reason for that. They’re all very similar and are all cold cuts/deli meats.

There are some important distinctions between them though, and we’ll explore those in this article today.

First, let’s start with the basics. We’ll talk about what each meat is, so we’re all on the same page. 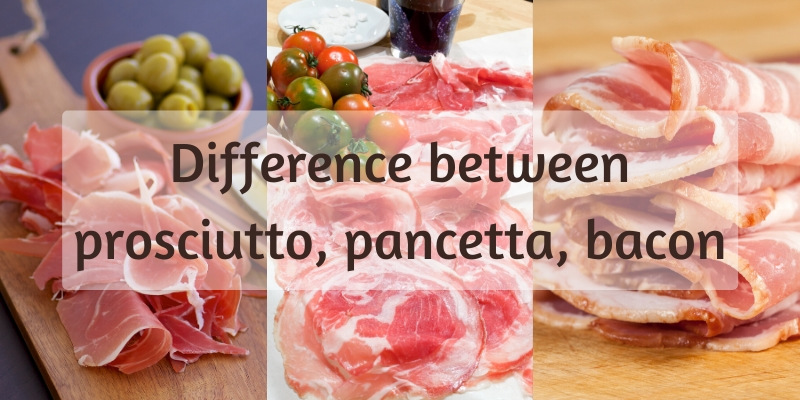 Table Of Content show
1 The main difference between prosciutto, pancetta, and bacon
2 What is prosciutto ?
3 What is pancetta ?
4 What is bacon ?
5 Main differences between these 3 meaty players
5.1 1. Bacon and pancetta may be substituted
5.2 2. Prosciutto is better served on its own
5.3 3. If grilling use either bacon or pancetta
5.4 All three meats are great on pizza and pasta
6 So does it matter which you use ?
7 Conclusion

The main difference between prosciutto, pancetta, and bacon

So depending on what you plan to do with the meat, it can impact how the recipe will come out. If you need to cook the meat, pancetta and bacon will be more suited since they have a bit more fat that will help them fry better.

Prosciutto is an Italian cured meat. It’s made form the hind leg of a pig, so it’s a ham by American standards.

You’ll find prosciutto in two forms: crudo or cotto. Most often you’ll find the crudo version since ti seems to be the most popular.

Prosciutto crudo starts out raw, and is rubbed with salts and aromatics and then dry-aged. It loses about 20-25% of its total size and weight due to moisture evaporation, and this leads to a very strong-tasting ham flavor.

The final version of prosciutto crudo – the one you find in the store – is not raw, but dry-aged and cured and can be eaten as-is, often sliced very thinly. 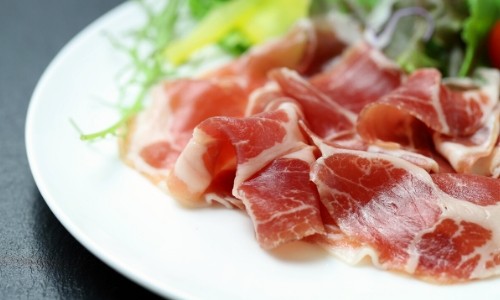 Prosciutto cotto is the exact same cut of meat, but cooked low and slow. Seasoned as well, and left to soak in a brine for a while. This prosciutto is much paler in color than the crudo version, and it’s also larger since it never lost its moisture.

Neither version is smoked, though then have a strong flavor. Most often you’ll find prosciutto cruso as one of the main stars of a dish, or served as one of the best meats on a meat and cheese board.

Pancetta is another Italian deli meat, but this time it’s made from pork belly, not leg.

The pork belly is brined and cured, but is not cooked. This product remains raw, and most be cooked before serving. 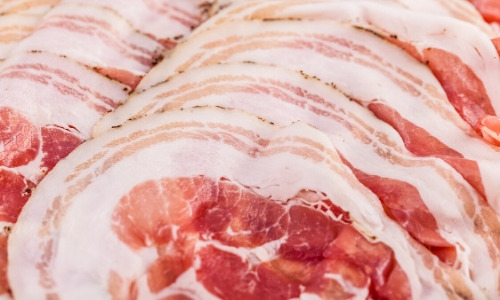 This is to allow no air to touch the meat. Pancetta is also exposed to warm temperatures for up to a day and a half to develop the flavor, while also being cold-smoked.

So pancetta is a raw, smoked, cured meat. It’s usually meant to give flavor to dishes, but isn’t the main focus.

Bacon is an American cured meat, also made of pork. It can be made of several meat cuts, but the most common are the belly and back.

You’ll know you’ve got belly back if it’s got long streaks of meat and fat running parallel to the skin (rind). These are the most common and the ones that end up shrinking the most when cooking, but are also the crispiest.

It’s back back is it’s got a wider swath of meat, surrounded by fat, with a little ‘tail’ at the end made up of equal parts fat and meat.

Being a cured meat, bacon is brined and seasoned heavily and it may or may not be smoked. It’s a very varied process and you can end up with bacon that is smoked, not smoked, aged, fresh, sweet (maple syrup and brown sugar), or any viable combination.

Fresh (raw) bacon is meant to be cooked, and that’s the version you’ll find most often. Dried/aged bacon may be eaten as-is, but you’ll have to check the individual packaging for specific instructions.

Bacon is rarely the key flavor of a dish, even when it’s something wrapped in bacon. Usually it’s served as a topping or side dish like bacon and eggs.

Main differences between these 3 meaty players

Alright, now you know about these 3 meats and we can properly discuss their differences.

We won’t get into the geographical differences since they’re not the most relevant in this context.

1. Bacon and pancetta may be substituted

If your recipe calls for pancetta but you have none and can’t get your hands on some real quick, you can easily replace it with non-smoked belly bacon. It’s a very common item so you might actually have some in the fridge right now.

The reason these can be substituted is because they’ve both got a similar amount of fat and it’s streaky for both, and they both come in nicely cut strips.

2. Prosciutto is better served on its own

Prosciutto – we’re talking about the crudo version here – is great on its own. Not cooked, and with a very plain cheese added.

This is an aged, low-moisture meat that’s going to melt in your mouth. Cooking with it or adding to any dish is going to drown out the flavor more than you’d like.

If you want to add flavor to your food, it might be better to use bacon or pancetta, since those cook better as they’re not as dry. 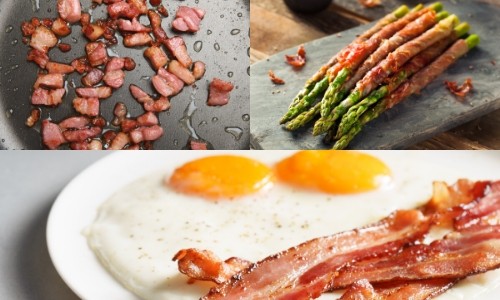 Examples of pancetta, prosciutto and bacon in cooking.

3. If grilling use either bacon or pancetta

Most meats taste great on a grill, though you’ll have to be careful with what you use.

We don’t recommend using prosciutto of any kind on a grill, whether it’s cotto or crudo.

Prosciutto is sliced very thinly and will burn easily, and it’s also got a lower fat content that will, again, make it burn quicker.

You’re better off using thicker strips of bacon or pancetta, depending on what you’re grilling.

All three meats are great on pizza and pasta

All that being said, all of them are great in on pizza and in pasta. Bacon and pancetta may be cooked with the pasta sauce, while prosciutto should be added as a topping at the end.

As for pizza some of the best pizza we’ve had prosciutto crudo, a bit of gorgonzola, and a nice sprinkling of Parmesan.

So does it matter which you use ?

If you’re a professional chef, or are aspiring to be one then yes you might want to really use one type of meat over the other, due to texture or flavor.

But for everyday use ? No, it doesn’t truly matter which you use.

The overall flavor is fairly similar and you’re getting the same kind of meat, which is pork. All three of them are cured, slated, seasoned and possibly smoked.

For regular home cooking it doesn’t make that much of a difference.

All three meats in this article are great in their own way and are bound to really make your food stand out. Cured meats add lots of depth to dishes and might be the missing, a-ha ! ingredient in a meal.

Feel free to do a little experimenting on your own and try things out, see if you find some combinations that you really do enjoy.