Are you just starting out with liver ? Then you’re likely starting with chicken liver, as it’s got the mildest taste of them all. It’s also one of the most common and cheap livers out there, compared to bigger animals like cattle and pigs. So what do you do when you bring home a nice casserole of fresh, raw liver and you start to rinse them, only to find.. a green pickle ? Well it’s green alright, and it tastes fairly strong.

Sometimes it’s not the whole thing, just a small growth on the liver. Sometimes, the whole liver has a greenish cast to it, which can be easily rinsed but doesn’t completely go away. And just what are those green spots all over the livers ? 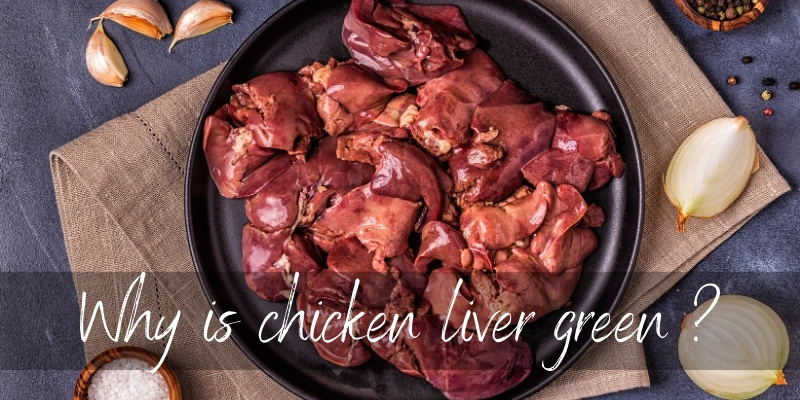 Table Of Content show
1 Why is chicken liver green ?
1.1 Why the gallbladders are sometimes left
1.2 What’s the black thing on the liver then ?
1.3 Why is the liver yellow or tan ?
2 Why is chicken liver bitter ?
2.1 Chicken liver has a very strong, earthy flavor to boot
3 How to tone down the liver flavor
3.1 Use onions, garlic, leek, chive, spring onions
3.2 Soak liver in milk for a couple of hours
3.3 Add a bit of heavy cream to the sauce
3.4 Add tomato sauce that’s been simmered for a long time

Why is chicken liver green ?

Chicken liver is green because it’s likely the gallbladder was somehow ruptured and spilled bile all over the liver. Sometimes it leeches right into the liver itself, under the protective membrane. And other times you won’t find the whole bladder but rather the remains of a poorly cut off one.

Gallbladders are useful, and chickens have one just like humans. It helps break down fat from the intestines, with the help of bile fluid.

Why the gallbladders are sometimes left

Most of the time, the gallbladder is removed in the slaughterhouse before the livers are packaged. This process is done by workers, because each liver is a little different and cannot be accurately done by machines. And as humans, oversights may happen. Sometimes there may be to many livers on the line and they simply don’t notice one that’s got the green pickle attached.

Read also: Why Are Chicken Gizzards So Tough ?

If your livers have such a thing, don’t panic. This is easy to fix. First, you need a good, sharp knife. Do your best to no puncture the gallbladder itself, otherwise you spill bile all over the liver. Gently separate the gallbladder from the liver with shallow, small strokes.

The liver itself is fine, as long as the bile didn’t end up seeping into it. Most of the time this isn’t the case. Just to be sure, check the liver for any green spots, or a greenish cast. This would mean the bile got under the liver’s protective film and can’t really be rinsed.

If your liver has only a small bit of green left, cut it away completely. Or, if you’re not sure if it seeped into the liver, throw away that particular liver. You have a whole casserole left.

What’s the black thing on the liver then ?

If your livers have no gallbladder on them, but they have e fairly thick black spot, it’s likely a vein that’s clogged with clotted blood. It can easily be removed with a knife, or massaged out under cold running water. Always rinse your chicken livers, you never know what may be left on them.

Why is the liver yellow or tan ?

You may have noticed your livers aren’t as usual, a deep purplish-brownish red. Maybe they’re a very light color, even a fairly pale cream. There’s nothing wrong with livers that look like that in that they won’t hurt you if you eat them.

Read also: Why Are My Stuffed Peppers Bitter ?

They are simply very fat livers, taken from chickens that have been fed a high carb diet and did not have enough chance to burn all those calories. The light color is just the fat deposit surrounding the liver tissue. You can eat this liver without a problem, don’t worry.

Why is chicken liver bitter ?

Chicken liver is a little bitter because it’s very vascularized, so it’s got a metallic, bloody flavor to it that people either love or hate. The bitterness is more of a background note, compared to other flavors you may feel.

It could be that this particular batch of chicken livers was somehow tainted with bile, and you did not notice when cooking. The bitterness from bile is severe, and taints the whole meal, not just one or two liver pieces.

Chicken liver has a very strong, earthy flavor to boot

When it comes to the flavor of chicken liver, it’s got a very earthy, rich, gamey flavor that turns a little irony and metallic. This is because liver has a lot of blood throughout its tissue. Not many people like liver, be it chicken or pork or beef. It’s really down to how you cook it, and how you were first introduced to this meat.

To be fair, most people encounter liver in a very bland setting, with some sauteed onions and not much else added. It can taste like a very old timey kind of meal, and we understand that. But there are better ways to cook liver, and a good spice and herb rack will save you a lot of trouble.

How to tone down the liver flavor

If you’d like to try liver but fear the flavor would be too strong for you, then you should use the following ideas. None of these will completely tone down or remove the flavor. But they will definitely smooth any rough edges and make liver more palatable.

Think of liver as a very rich, gamey meat when you think of what to add with it. So either another strong flavor, or something very sharp and light to cut right through it. Often it’s a combination of both that works the best.

Any member of the Allium family such as onions, garlic, shallots, leeks, chives, and spring onions bring a deep yet contrasting note to liver. A great combination is to remove the green parts of spring onions and chives, and only add them on top of the dish, as a garnish at the end.

Add herbs like rosemary, dill, or fresh basil to cut right through the liver’s richness and make it more palatable. Dill works better if you’re going to use rice or potatoes as a garnish. 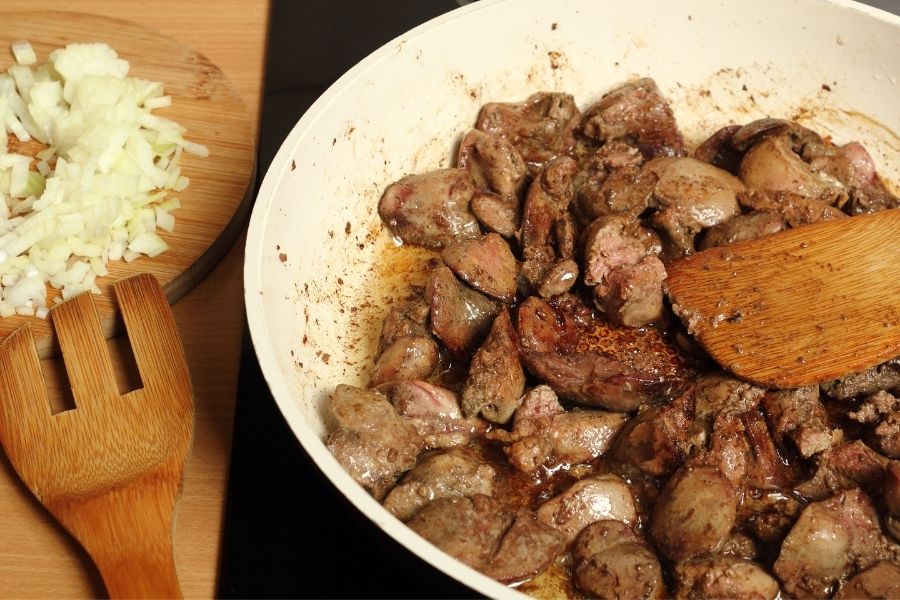 Soak liver in milk for a couple of hours

Another thing to try is soaking the raw, fresh liver in cold milk for a couple of hours. This will draw out impurities, leftover blood, and bitterness from the liver. Now, some claim this method doesn’t change the flavor all that much, especially if you’re using liver from larger animals, like turkey or cattle.

But some say the chicken liver turned out more tender and not as bitter. The whole idea behind this is that the lactic acid in milk is the main ingredient, so you could probably obtain a similar effect with lemon juice or vinegar. But those are much more acidic and may end up leaving a strong aftertaste on the liver.

You should throw out the milk after letting the liver soak like this.

Add a bit of heavy cream to the sauce

When the liver cooks, you may add something like heavy cream, because the fats and protein in cream will dull the bitterness. Actually it works very similarly to the way creamer takes the edge off coffee.

Add tomato sauce that’s been simmered for a long time

You can also try adding tomato sauce that’s been already simmered. This way the liver flavor will be dulled a little, and the tomato brings its own sweetness. Again, this only works if the tomato is simmered for several hours beforehand, otherwise it won’t be the right flavor. And no, adding a pinch of sugar is not the way to finish off a tomato sauce. You have to simmer the acidity away.

And that’s pretty much it. These are the most common ways to cut through the liver flavor, and some may be better suited to your style than others. Do give them a try, and remember to check the liver for any odd gallbladders, and rinse them thoroughly.