So you’re in the mood for a delicious batch of stuffed peppers and can’t wait to get your taste buds on them. In an effort to get a really nice presentation going on (and variety), you get that beautiful 3 or 4 colored bell pepper pack and get cooking. Except some of them are a little bitter.

What’s to do ? Why are the stuffed peppers bitter, and is there any way to fix them ? This is what we’re going to address today, along with a few other common stuffed pepper problems. 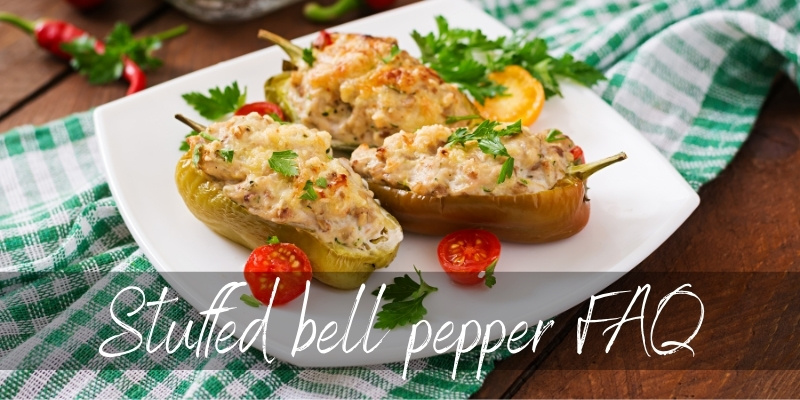 Why are my stuffed peppers bitter ?

Stuffed peppers can easily end up bitter when using green bell peppers. They are the most underripe peppers, and will have a bitter note to them that is very pronounced once cooked. Some love it, some hate it. Green peppers are always going to be fairly bitter and earthy tasting.

Always remove seeds and membrane from bell peppers, especially if using green ones ! When you go to cut the bells, cut a round(ish) hole at the top where the stem is, scoop out the seeds, and pick out the remaining ones at the bottom. Try your best to pick out the membrane as much as you can, without damaging the bell.

And always, always pre-cook your bell peppers when stuffing them. Especially if you use green bells, because they’re less bitter once they’re fully cooked. So dunking them in boiling water for 2-3 minutes will help break down the bitterness. Don’t completely rely on it though. As the bell pepper cooks, its juices will collect inside, where the stuffing is.

If you want to completely avoid the possibility of bitterness, only use red bel peppers. Those are the most ripe, and actually have a sweet note to them. If you can’t find any red ones don’t go lower than orange. As a bell pepper matures, it goes from green to yellow to orange and then red.

The more mature the bell, the sweeter it is and the less change of it being bitter. Keep in mind that all bell peppers have a very specific flavor, which an be easily confused for bitterness. Even the red ones.

How do you balance a bitter taste ?

Add something fatty or cheesy, like Parmesan, mozzarella, Cheddar, raclette. They will take the edge off the bitterness and allow more flavor to shine through. Your best bet is to add the cheese on top of the bells, halfway through cooking.

If you add the cheese in the stuffing it may work weird with the minced meat and form an odd lump. It’s best to use the cheese as a sort of ‘cap’ or lid. Or, you can make a cheese sauce, or a heavy cream sauce. Both will smooth out the taste and turn this into a real comfort food.

You can also try adding some sweet paprika to the stuffing. This way it will have a definitely sweet note. Other options can be coconut milk and/or butter, or cashews.

Why are my stuffed peppers so hard ?

Stuffed peppers have a high change of being hard if you don’t pre-cook the bells before stuffing them. The thing is, bell peppers have a very thick flesh, and they’re very sturdy.

They do soften while cooking, but sometimes it’s not enough. Sometimes you’re left with a bell pepper that has more texture than you’d want, especially the younger green ones.

So, what can you do ? If you started out with raw stuffing and raw bells, you can try cooking everything for another 10 minutes, maybe 15. Cooking in general isn’t a time-it-right kind of deal, it’s more of an intuitive action. Some ovens may burn hotter, especially induction ovens. They also retain more moisture, so your bells won’t dry out as much.

In short, cook the stuffed peppers until they’re soft on the outside. Or, you can reduce cooking time by pre-cooking them while the oven heats up. Prep your bells as usual, and set a pot of water to boil. Once it’s boiling, add in the bells and leave them there for a couple of minutes.

You’re looking for a softer texture, and a slightly wrinkly skin. They should still be somewhat sturdy, be able to stand on their own. Be sure to have an ice bath ready to cool them down. Otherwise you won’t even be able to hold them to stuff.

Why are my stuffed peppers crunchy ?

Stuffed peppers may be crunchy because of two reason: either the peppers are really underdone, or the rice is underdone. It depends on what you’re feeling when chewing.

If you’re feeling gritty bits every now and then, it’s likely the rice. This is very common when using raw rice, which is also common when using a completely raw stuffing. Keep in mind that stuffed peppers are fairly thick, so cooking that amount of stuffing is not going to be easy. It’s best to start with a pre-cooked stuffing, or at least half cooked.

So, this means also using a pre-cooked rice. Day old rice, like for stir fry is best.

The other reason your stuffed peppers may be crunchy is because the peppers themselves need more time. If you’ve use pre-cooked stuffing, and only had raw bells to use, 20 minutes in an oven may not be enough. You’ll know when the peppers are done if they can be easily pierced with a fork. Or, better yet, split open with the side of a fork.

The fix for this is to simply cook the peppers longer, or pre-cook them before stuffing. 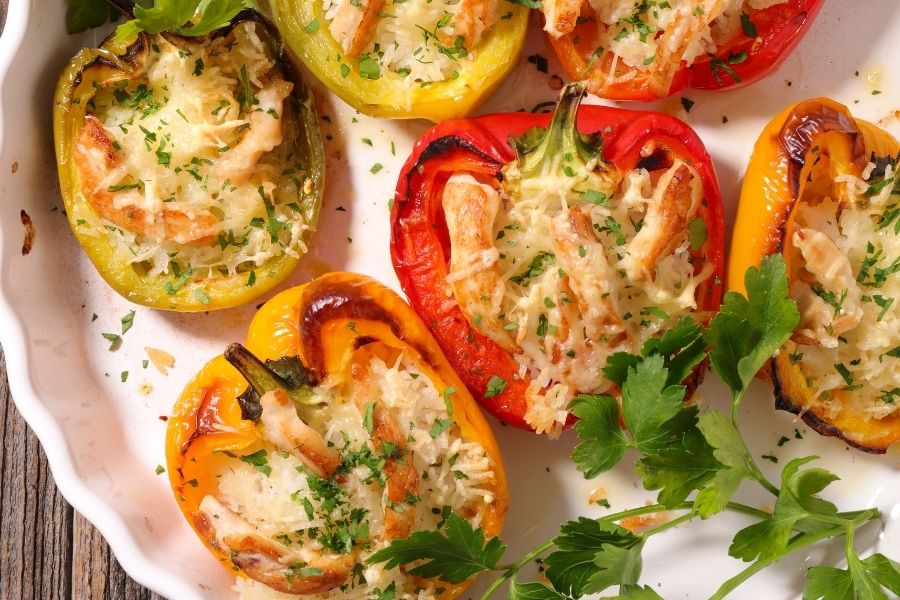 Why are my stuffed peppers so dry ?

Dry stuffed peppers are usually the result of overcooking, or using a stuffing with very little fat and too much protein. You see, when you stuff peppers normally you use minced meat, onions, rice, and seasonings.

If you’re using minced beef, you have a very high change of getting a dry stuffing. Try using ground pork, or if you’re mincing your own meat add in some fatty meat, you can even mix beef with pork !

Leaner meat like chicken breast, lamb, or mutton will also get you a dry stuffed pepper. Don’t be shy and add a bit of oil when you’re cooking your stuffed peppers. Even if you’re using completely raw stuffing, mix a bit of vegetable oil in there, it will help a lot.

As for overcooked bell peppers, this can easily happen is your oven is on high and it’s a regular, gas oven. These bad boys dry out anything you put in them, which can be a great plus. So, you can either add a bit of water to the tray or put some aluminum foil on top.

If you just add water to the tray, you risk getting a crusty top and a soggy bottom. Which is why we recommend using the aluminum foil method, because it will trap whatever moisture is released and cook the food evenly. You can remove the foil in the last 10-15 minutes to add some nice color and evaporate some of the water, if there is any left.

Read Also: Why Is Rabbit Meat Not Popular ?

Why are my stuffed peppers watery ?

Watery stuffed peppers are a fairly common problem, especially if the bells are not pre-cooked. As the vegetable cooks in the oven, it releases moisture, which will pool at the bottom. This can easily lead to a very moist, water stuffed pepper. Normally the pepper would dry out nicely on its own, but sometimes the stuffing can prevent that from happening.

You can try pricking the very bottom of the stuffed peppers before stuffing them, to allow some of the liquid to drain. Another option is to not add any extra water to the baking tray, since it can add too much moisture to the stuffed peppers.

If you’re using pre-cooked rice, it won’t absorb too much moisture. If you know you often get watery stuffed peppers, try using raw rice instead. Be careful though, because if you don’t cook them enough you may just end up with a semi0cooked, gritty rice.

And finally, watery stuffed peppers can also be a result of the cheese you’re using. Whether it’s in the stuffing or just on top, very moist cheese can and will seep water into the pepper. So cheese like mozzarella should always be used sparingly, and only on top. If you’re using something like feta or halloumi or fresh white cheese, those can get you a very watery pepper as well.

Hopefully this troubleshooting post managed to help you out, Stuffed bell peppers are amazing on their own, but they are a real pain to get right. It gets better as time goes on though, so don’t worry f your first few tries are not exactly what you’d like.