Chicken seems to be the meat of choice for a lot of people. It’s light, compared to beef, it pleases most people, and it makes the best damn soup. Most of the time you get chicken meat with the bones and skin already removed, especially if it’s chicken breast.

Sometimes though, you buy a whole chicken, or skin-on chicken. And in those cases you can sometimes find yellow-skinned chicken.  At times the fat and meat are yellow tinted too. Why is chicken skin yellow ? We’re talking about the overall skin, and the skin on the knee and leg of the chicken. 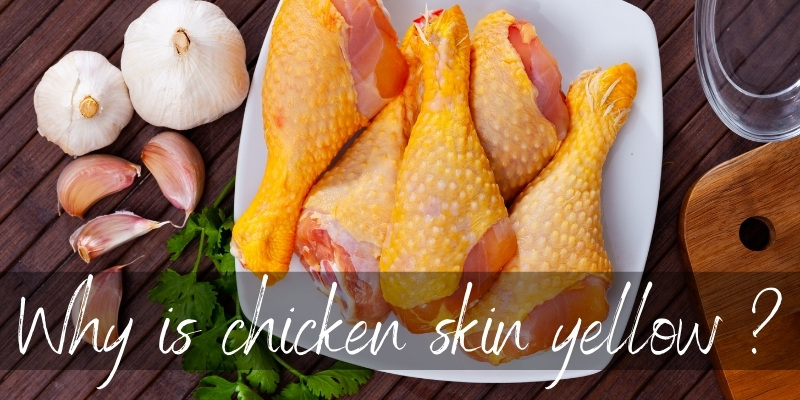 Table Of Content show
1 Why is chicken skin yellow ?
1.1 1. Chicken feed may contain corn and grass
1.1.1 Why chicken are fed corn
1.2 2. Genes from the grey junglefowl
2 Farm-raised, healthy chickens had a yellow tinge to their skin
3 Yellow skin on the knees can be easily removed

Why is chicken skin yellow ?

Chicken skin can be yellow because of two important factors, its genetic makeup and the food it gets every day. Chickens that have genes from the grey jungle fowl will always have a yellowish tinge to their skin and sometimes the flesh itself.

And chickens fed with corn, marigold, paprika, and similar carotene-heavy foods will eventually bring that pigment into their skin.

One thing is for certain: yellow skin is not a bad sign for chicken meat, as long as it does not smell like rotting meat or too much blood. Now let’s take a closer look at those two factors that decide whether a chicken will end up with a yellow tinge on its skin.

The biggest factor is the food the chicken gets everyday. Many chickens are fed a diet made up of corn, fishmeal, and grains. This gives them plenty of protein, carbohydrates, fiber, and minerals so they can grow healthy and lay healthy eggs.

One effect of corn, aside from fattening the chickens, is to bring a yellow pigment into the egg yolk. The yellower the yolk, the better the egg is perceived by customers. Some even add in a bit of paprika to get their yolks closer to an orange color.

Back to the skin, a corn-heavy diet can impact the color of the chicken skin, and even the flesh a bit. The more corn a chicken will eat, the more likely it is to have a yellow skin. Chickens fed exclusively corn (or mostly corn) have the most yellow skin.

You should usually find a label on the chicken meat packet, stating whether this was a corn-fed chicken or not. The yellow tinge can even affect the fat, making it look an unsettling shade of yellow. If the skin on your chicken has a distinct yellow color, don’t worry about it. It will fry or roast just the same as any other chicken.

Why chicken are fed corn

As for why the chicken is fed corn, it has to do with what consumers expect and practicality. We’ll get to consumer expectations later in this post, first we’ll cover why corn is convenient.

The corn industry, at least in America, is subsidized by the government. This makes it very cheap for farmers who want to feed their livestock, chickens included. Chickens usually get the corn kernels, while cattle get the stalks and husks. So, it’s cheap to feed and it gets the job done. Now let’s take a look at the second reason your chicken may have yellow skin. 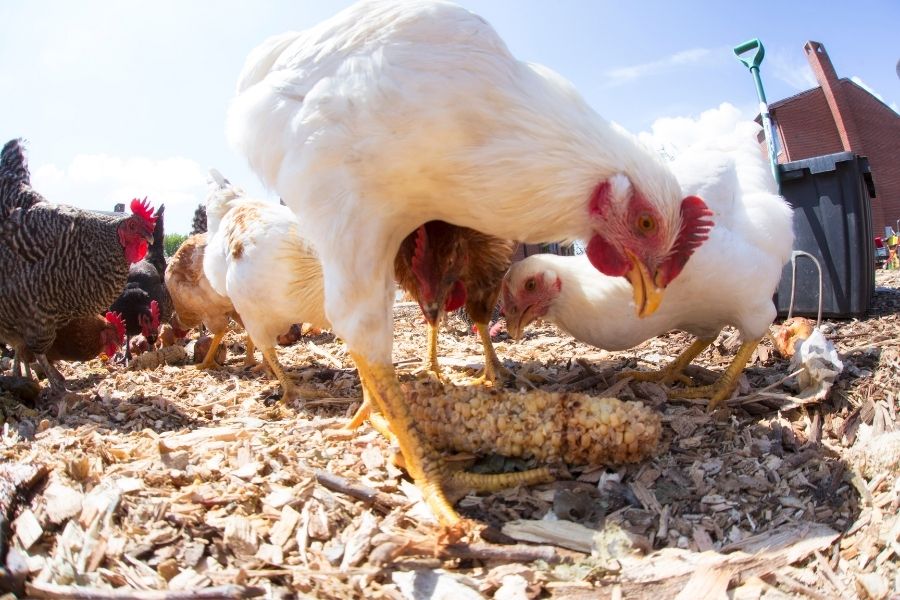 2. Genes from the grey junglefowl

These two birds make up most of the genetic history of the current chicken population. And the grey junglefowl is distinctly yellow under all those feathers, especially on the legs.

Each breed of chicken currently available has more or less of the grey gene. Those who do have this fowl as an ancestor will have a higher chance of developing a yellow skin.

Couple this with a diet with plenty of corn, and you get an especially yellow skinned chicken. You won’t notice the color under the feathers, but when the chicken is slaughtered, it is clearly noticeable.

Farm-raised, healthy chickens had a yellow tinge to their skin

Now we come to consumer expectations. Back in the day chickens were farm animals that roamed the farmstead and ate whatever they could find. Corn, grass, insects, worms, what have you. This was a chicken that had plenty of exercises and saw the sun and the sky. And it was always yellow-tinged.

Now, whether this was true or not, we’re not completely sure. It’s true that farm-raised chickens do tend to have a yellowish skin, but it’s also true that they’re not slaughtered as young as they are on a commercial farm.

But people associate a yellow skinned chicken with a farm, good feed, and exercise for the chickens. Not everyone does, but enough people do that the thought still exists. You may be wondering why doesn’t everyone just feed their chicken corn all the time, then.

Well, it has a lot to do with what each producer deems worth the hassle. In truth corn feed is fairly cheap, but more importantly it fattens the chickens fast. They grow faster, and arguably better from a consumer standpoint. Not all producers are alright with that idea, and not all corn is cheap.

Yellow skin on the knees can be easily removed

We’ve discussed all that yellow skin without touching on a specific issue: yellow skin-on chicken legs or knees, despite the skin being white. This happens sometimes, as the slaughterhouse doesn’t always cut the chicken exactly perfectly. So sometimes bits of the knee are left towards the end of the chicken drums.

That yellow skin can easily be stripped off with your fingers. Underneath that layer, the skin should be about the same color as the rest of the chicken. Usually, if you notice yellow skin on the knees you may also find some leftover small feathers so be sure to strip those too.

And that’s pretty much it about yellow skins on chickens. It’s not all chickens, and even when you find it it’s not harmful. SO don’t worry about it and prep your meal as usual.