When you’re cooking fish you know it’s a whole different game than poultry or beef. Fish is more fragile, is easier to overcook, and it might not sit well with everyone. But cod is one so the most common fish on the market so it’s very likely you’re cooking cod if you’re having fish. And as you might’ve noticed, cod has a tendency to turn hard and rubbery when you cook it, but is there anything you can do ? Can you cook cod better or is this fish hopeless ? Let’s take a look. 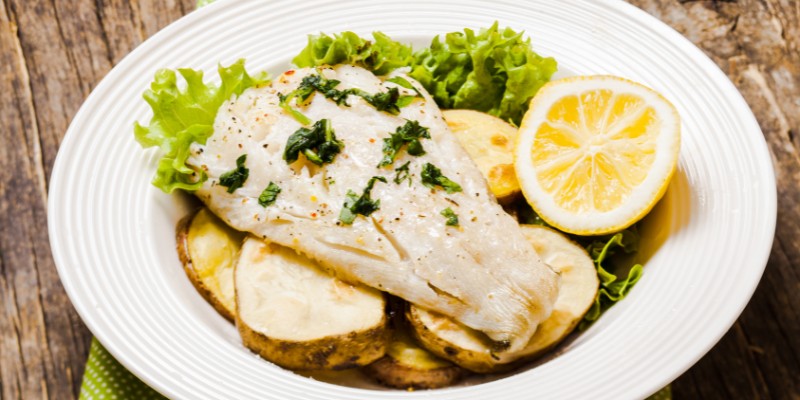 Why is cod fish hard ?

Cod fish turns hard and rubbery when it’s overcooked, since this is an extremely lean fish and very unforgiving in terms of coking time and doneness. It’s very easy to dry out a cod fillet, since there isn’t any fat or fish oil to keep the meat moist, like with salmon or trout.

The best way to make sure your cod doesn’t turn hard and doesn’t dry out is to bread it, to trap in some moisture while the fish is cooking. The breading acts as a barrier and will turn crispy while the fish will remain moist. This is not 100% foolproof, but it gives you better results, most of the time. To get the best results stop cooking the fish when the breading turns golden-brown and crispy.

How do you know when cod is done ?

Cod is done when it loses its transparency, and it easily separates into flakes if you try it with a fork at its thickest point. If you’re looking for time/minutes, usually 10 minutes in a screaming hot pan will do. If you’re using an oven, a full heat (approximately 460 F/240 C) oven will take about 15 minutes. This is assuming your cod fillet is 1-1.5 inches at its thickest (about 2.5-4 cm). Thinner cod pieced will take less time to cook.

It’s very easy to dry out cod, so don’t rely on the firmness test, because cod done just right and overdone cod are both firm. And if your cod fillet isn’t the same thickness all the way through (which is usually isn’t) then the thinned edges will always dry out, compared to the thicker part.

Judging cod doneness by color and appearance alone can be very tricky, since you’re looking for the meat to turn opaque and white, which is harder to detect in meat that is white to start with. It’s something you’ll have to learn in time as there aren’t really any shortcuts.

Cod is an incredibly mild tasting fish, to the point where if you’re expecting a typical fish flavor you’ll be disappointed. The mildness in cod comes from its white meat and almost complete lack of fat. There isn’t much to give cod a strong flavor, which makes it a great option for those who don’t want an overwhelming fish on their plate.

If you want to compare cod to something, it’s more like eating shrimp or calamari rings. Not a strong flavor, and similar in texture to cod when they’re not overdone.

Why is cod so white ?

Cod is considered a whitefish, and it has a very lean meat. Most of its fat is actually in its liver. Cod is white since it lives very close to the sea floor, unlike salmon which lives away from the sea floor and sees more swimming, in pursuing its prey. Generally the more swimming a fish does, the darker the meat, and the paler the meat the less swimming it needs to do.

Cod is a predator fish, but the vast majority of its prey are tiny aquatic organisms like phytoplankton and krill, which are easier to catch than what a salmon needs (herrings, squid, sand lances, the occasional grasshopper). In short cod fish in general have a mostly inactive life, when compared to deeper-colored fish that actively hunt for their meals. 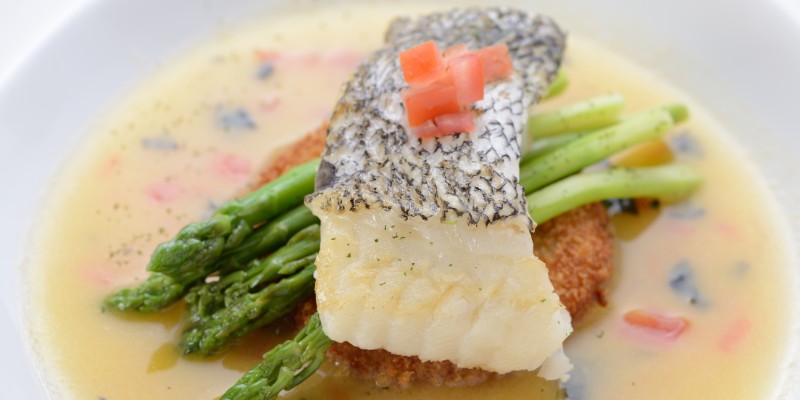 Cod is a very mild tasting fish, far milder than most other fish on the market so I’m going to list similarly mild fish here. Please keep in mind that cod does also include Alaskan pollock, haddock, and whiting. Not all cod on the market is actual cod fish, some have the ‘cod’ label tacked on to make it more palatable to the public, despite not actually being cod.  So let’s see some fish that are similar to cod, that either taste better, are easier to find, or have a similar look to them.

Halibut is a large flatfish, with dense white meat and ultra-low fat content. This means it’s just as difficult to cook as cod, but far more expensive. If you’re looking for a non-fishy meaty fish flavor, with a clean finish, halibut is an excellent choice and really good if you’re celebrating or otherwise want to splurge.

If cooking at home, be warned that halibut gives very large fillets, and you can sometimes find an entire halibut side. That being said, cooking halibut is a bit of an art so either be prepared to maybe overcook it, or order it at a seafood restaurant where you’re sure the cook will do it justice.

Despite the ‘black cod’ label, this fish isn’t actually cod. It’s in a whole different family (Anoplopomatidae) than actual cod fish (Gadidae). It’s named or considered a cod-type fish only because of its white meat, despite being unrelated to cod. The ‘black’ part of the name comes from the skin, which is black on the spine of the sablefish and slowly turns to grey as it reaches the belly.

Black cod is quite dense, has a very mild flavor, and some say it has a buttery hint to it, despite being 100% fish. It’s far cheaper than halibut, closer to other cod-type fish in price actually.

Sea bream is another white fish, with a mild flavor and dense meat, similar to halibut. This is another lean fish, so again very easy to overcook/dry out. The fillets are fairly thin, so you should cook it on high heat but for less time than other fish on this list.

Whichever fish you go for, it will get you that mild flavor that isn’t overwhelming and might not even need lemon at all (depending on your tastes).